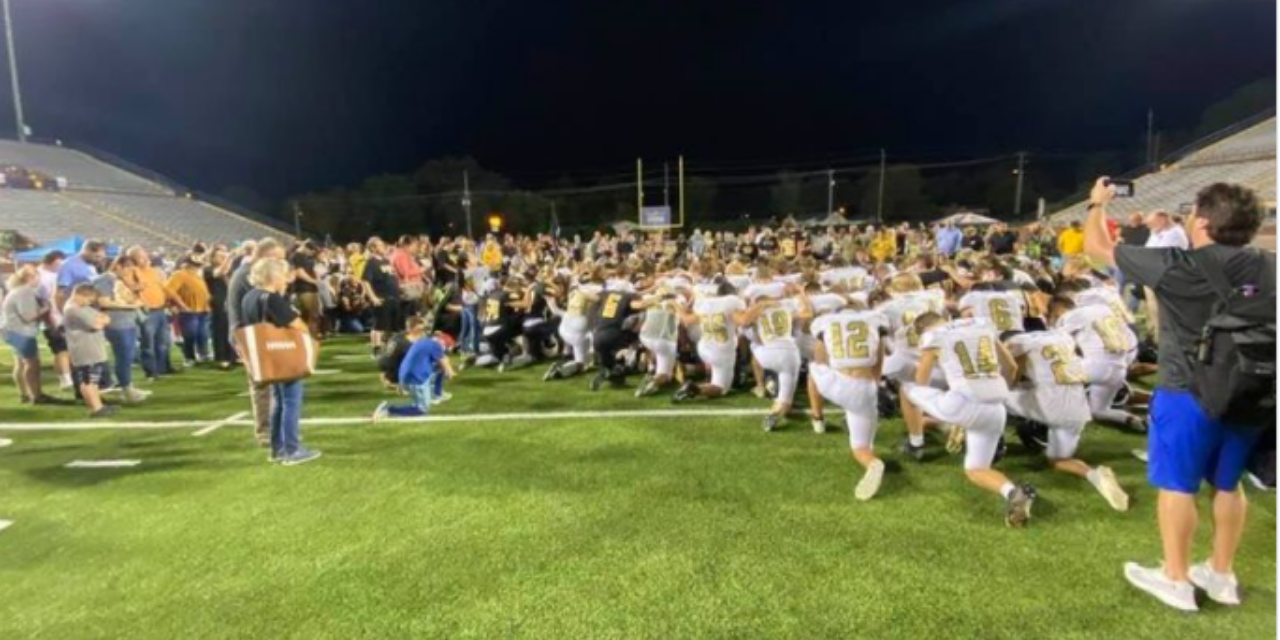 The tradition of postgame prayer after Friday night high school football games runs deep in the Bible Belt. Even in public schools. So, when a local school district in Putnam County, Tennessee, responding to complaints from an out-of-state secularist organization, told its coaches and other employees they could not lead students in prayer, the fans and students took over.

The result was a postgame prayer scene you have to see to believe.

Upperman High School was scheduled to play Stone Memorial High School on Friday, September 17. Ahead of that game, however, the school district received a letter from Washington, D.C.-based Americans United for Separation of Church and State admonishing the district for “several instances of prayer and proselytizing at events at Cookeville and Upperman high schools.”

In response, the district instructed its employees – including teachers, staff and coaches – that they were not allowed to lead students in prayer. Americans United celebrated by claiming “A great WIN for [Church-State] Separation!” on Twitter.

When parents got wind of the order, however, they were not pleased. One of them was Dustin Whitefield.

“We do realize this is a public school, but it has always been optional for players to pray, and has been a voluntary event,” Whitefield wrote to WZTV Nashville. And then he proposed a solution.

“We will join hands and encircle them from a distance as a sign of protection and solidarity in choosing to continue to pray. This is a parent led event! We are encouraging anyone that would like to show their support to please join us.”

And they showed up in numbers, as a photo of the large crowd posted on Facebook by Bob Vick, a Putnam County Schools alum, shows.

Nothing energizes the faith community faster than being told that prayer is unacceptable. Kudos to the parents and students of Putnam County schools for keeping their prayer tradition intact.

The U.S. Supreme Court ruled in 1962 that school-sponsored prayer in public schools violates the Establishment Clause of the First Amendment. The interpretation and application of that ruling, however, has gotten so out of hand over the years that a high school football coach by the name of Joe Kennedy in Bremerton, Oregon, praying quietly to himself in 2015 on the football field after a game, lost his job.

Coach Kennedy is now asking the Supreme Court to take up his case, clarify the contours of the First Amendment with regard to such expressions of faith, and hopefully give him his job back.

CORRECTION: An earlier version of this article incorrectly identified Bremerton as a city in Oregon rather than Washington. We regret the error.