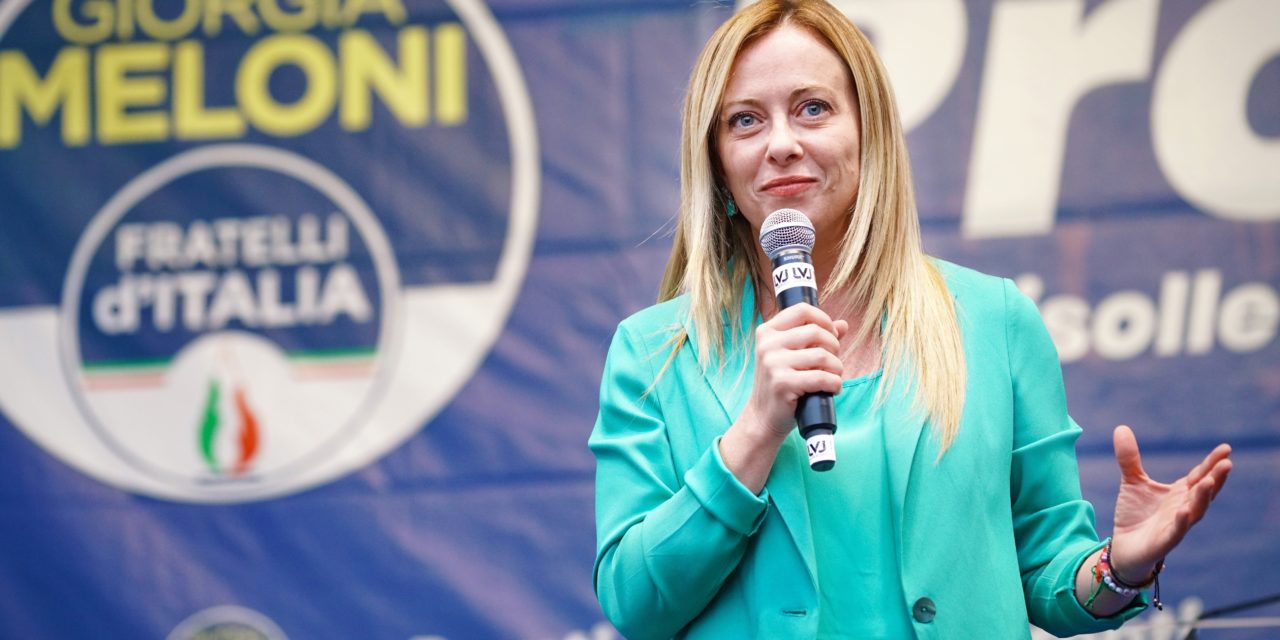 Sunday, the leader of the largest political party in Italy, Ms. Giorgia Meloni (45), became that nation’s new Prime Minister, bringing in one of the most conservative coalitions in that country since World War II. Meloni is the first woman to lead Italy.

If you have heard anything about her election in mainstream press, you have also heard Meloni’s election marks a disturbing rise in “neo-fascism” across the political world.

CBS News called Meloni a “far-right neo-fascist.” CNN warned in their headline she is “Italy’s most far-right prime minister since Mussolini.” The Atlantic’s article on her election cites Mussolini and Hitler right out of the gate. The New York Times article did essentially the same. The Hill newspaper toned it down just a bit, referring to her only as “the far-right Italian leader.”

But is it true?

If you read any of these stories, you soon discover the real reason most mainstream media outlets are putting such a scary spin on her election. Further in the CBS story, they warn she speaks regularly of “God, fatherland and family.” The Hill called her a “far-right firebrand” because at a 2019 rally she boldly proclaimed, “I am Giorgia, I am a woman, I am a mother, I am Italian, I am Christian.” Most people don’t see this kind of talk as radical or scary at all. They find it comforting.

After her decisive election, Meloni told Italy and the world what her administration would do. “We will defend God, country and family,” noting these are “[t]hose things that disgust people so much.”

Yes, that is why the Left is freaked out and trying to broad brush her as most dangerous, in line with some of history’s worst scoundrels. It is their new modus operandi. Absolutely demonize the opposition as threats to all that is good.

But Italian citizens saw through the smoke screen, voting as they did because they are just as concerned about the scourge of woke politics as we are in America.

Meloni’s election was not even close, according to this graph from the BBC, Here is a sampling of some of the new prime minister’s recent speeches on social issues related to the family, sexuality, gender, and faith.

Here she thunders unapologetically, “Yes to natural families, no to the LGBT lobby, yes to sexual identity, no to gender ideology, yes to the culture of life, no to the abyss of death.”

"Yes to natural families, no to the LGBT lobby, yes to sexual identity, no to gender ideology, yes to the culture of life, no to the abyss of death, no to the violence of Islam, yes to safer borders, no to mass immigration, yes to work for our people”
pic.twitter.com/xvxH1UbLO2

Here Meloni denounces trends to remove the words “mother” and “father” from official documents. She denounces how things like standing for family, national pride, the objectivity of male and female have become national enemies. She warns how basic rights to think and speak for oneself are being taking away by the government powers. She declares, “I’m ashamed. I’m ashamed of a state that doesn’t do anything for families.” She adds, she “is ashamed of nation that puts” the desires of two men to adopt a child above the right of that child to have a mother and father “just because the homosexual votes and the child doesn’t.”

I love her. Do we have a single American politician capable of saying these things, with such force and conviction? https://t.co/oJBXiSfImn

Meloni explained this is why citizens are rising up and resisting these very dangerous trends, fighting them so rigorously. She intends to help lead this resistance,

She closes these powerful words by quoting the great Christian thinker, G. K. Chesterton. Fascists certainly do not quote Chesterton.

My God, this is it. This is the thing. @GiorgiaMeloni is the one we have been waiting for! https://t.co/goGNbAzCsz

Giorgia Meloni’s election to the highest seat in Italian government, and the conservative coalition she brings with her, is certainly an interesting development for the values that we hold most dear. The Daily Citizen staff will certainly be following the direction of her administration with great interest and reporting on what we learn.