Men Play Consequential Role in Women’s Decision to Have an Abortion, Survey Finds But a study has found that men play a consequential role in their partner’s decision to have an abortion.

The study was conducted by Care Net, a network of Christian crisis-pregnancy centers, and surveyed 1,000 men with an online survey.

The study found that more often than not, when men found out that their partner was pregnant, they responded by encouraging her to get an abortion. The survey also asked men who did encourage their partner to have an abortion what their reasons were for doing so.

The top reason was a purely economic decision. 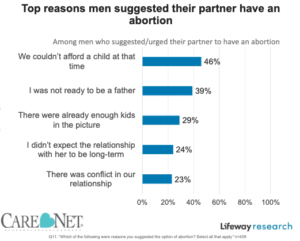 Only 28% were never attending church.

The idea that abortion only effects women, or that men can’t have a say in the issue, is a lie. Plain and simple.

A separate survey has found that of women who have had an abortion, “women are most likely to discuss their decision to terminate with the father of the baby.”

This lines up the Care Net’s recent survey which also found that their male partner is far and away the most likely person a woman will talk to prior to getting an abortion, with 74% of men saying their partner had discussed the issue with them.

And “38% of men whose partner later has an abortion say that they were the most influential on her decision.”

Ryan T. Anderson, president of the Ethics and Public Policy Center (EPPC), told The Daily Signal that the study “confirms once again that, far from being solely a ‘woman’s issue,’ everyone has a role to play in building a culture of life.”

“Husbands and boyfriends are particularly important in the advice and support they offer to pregnant women, as are churches—and more needs to be done to encourage women to choose life,” he added.

Here’s a brief exhortation to men who have gotten their partner pregnant. It’s time to step up and provide, protect, and care for your partner and preborn child. It’s what men do.

Abortion and the Christian Man

Men: Moving Past the Pain of Abortion

Should Men Have a Say in Abortion