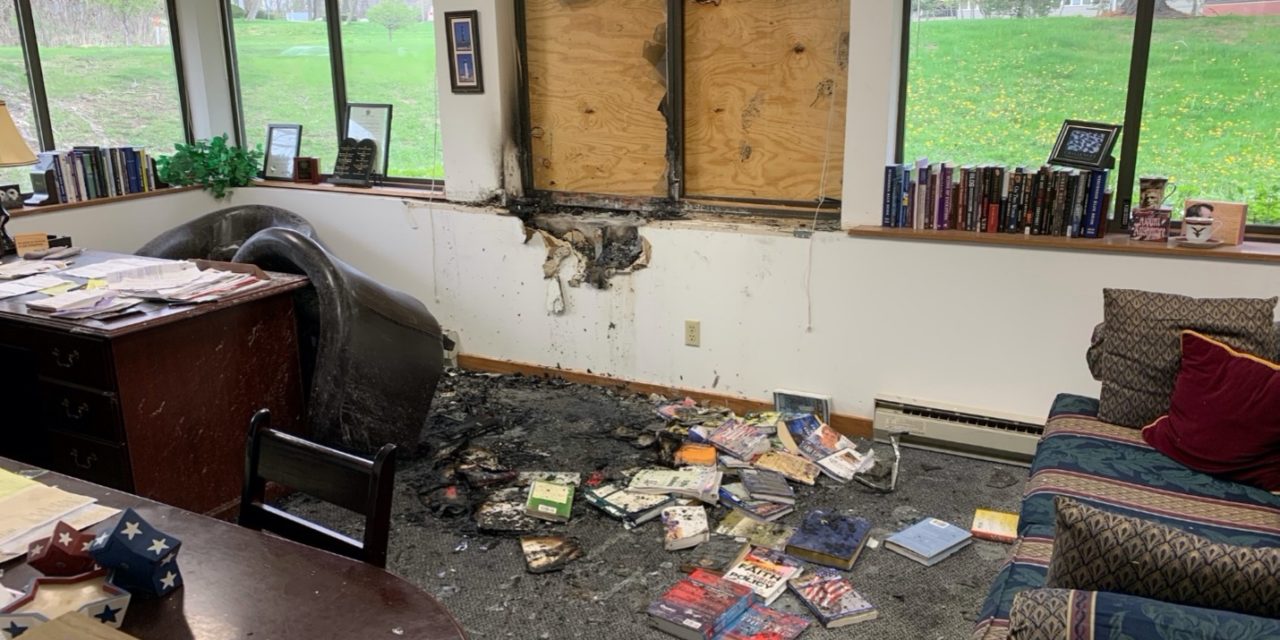 The office of Wisconsin Family Action (WFA), a pro-family ally of Focus on the Family headquartered in Madison, Wisconsin, was set on fire during the early hours of Sunday, May 8, after unknown persons broke windows and threw at least two Molotov cocktails inside. The office was damaged by the resulting fire.

There were no injuries.

The perpetrators spray-painted a threatening pro-abortion message on an exterior wall of the building: “If abortions aren’t safe, then you aren’t either.” A group called Anarchy 1312 claimed responsibility for the attack on WFA by spray-painting its symbol, which also stands for an anti-police slur, on the wall of WFA’s building, according to a Facebook post from Julaine Appling, president of WFA. “While this attack was directly provoked by the leaked draft opinion from the US Supreme Court in the Dobbs case earlier this week, this has far broader implication,” Appling said. “Apparently, the tolerance that the left demands is truly a one-way street. Violence has become their answer to everything. This is what happens when leadership is missing or when leadership implies that violence is ok.”

Appling is determined not to let this attack deter her group from continuing its pro-family mission, although she has promised to step up security measures.

“But this attack fails to frighten us, and instead steels the resolve of law-abiding, common-sense, every-day folks to stand up and push back. We know today it is Wisconsin Family Action getting Molotov cocktails tossed through broken windows and fires ignited, but tomorrow it could be anyone in our state or another state who is attacked because we disagree with a policy or action, give voice to the voiceless, or stand up for what’s right.

“Americans see through the hypocrisy of the left. The violence needs to stop and stop now. It’s not the answer to any question or any problem. Just because the liberals don’t get their way, doesn’t give them license to threaten bodily harm or to burn and destroy,” she added.

The firebombing was quickly condemned by Wisconsin politicians on both sides of the political aisle, and President Joe Biden also issued a statement condemning the action, according to Fox News.

“President Biden strongly condemns this attack and political violence of any stripe. The President has made clear throughout his time in public life that Americans have the fundamental right to express themselves under the Constitution, whatever their point of view. But that expression must be peaceful and free of violence, vandalism, or attempts to intimidate,” the White House said in the statement.

WFA is not the only target of pro-abortion leftists resulting from the leaked draft of a majority opinion in Dobbs v. Jackson Women’s Health Organization last week that purports to overturn Roe v. Wade.

Over the weekend, protests were held at the private homes of two Supreme Court justices, organized by groups called Ruth Sent Us and Shutdown DC. Responding to calls for the president to use his influence to protect the justices by calling for an end to the protest plans, White House Press Secretary Jen Psaki simply emphasized in a tweet that the protestors should remain peaceful.

“@POTUS strongly believes in the Constitutional right to protest,” Psaki wrote. “But that should never include violence, threats, or vandalism. Judges perform an incredibly important function in our society, and they must be able to do their jobs without concern for their personal safety.”

The rising tide of violence on the left is a concern for law-abiding citizens.

As we witnessed in the Seattle and Portland riots, the pro-abortion violence in Los Angeles, and the death and destruction that occurred in Kenosha and Waukesha, Wisconsin, resorting to violent actions as a political tool only creates deeper divisions in society.

Intimidation, even if successful in the short term, wins you no long-term friends.

As Christians, we understand that there is a spiritual side to the violence we are witnessing, and we are called to be as “wise as serpents and as innocent as doves” (Matthew 10:16 ESV). We rejoice that no one was hurt in the WFA firebombing, and we pray for God’s protection for that organization, its employees, its president, Julaine Appling, and also for our Supreme Court justices as we await that court’s decision in Dobbs v. Jackson Women’s Health Organization.

All photos from Julaine Appling