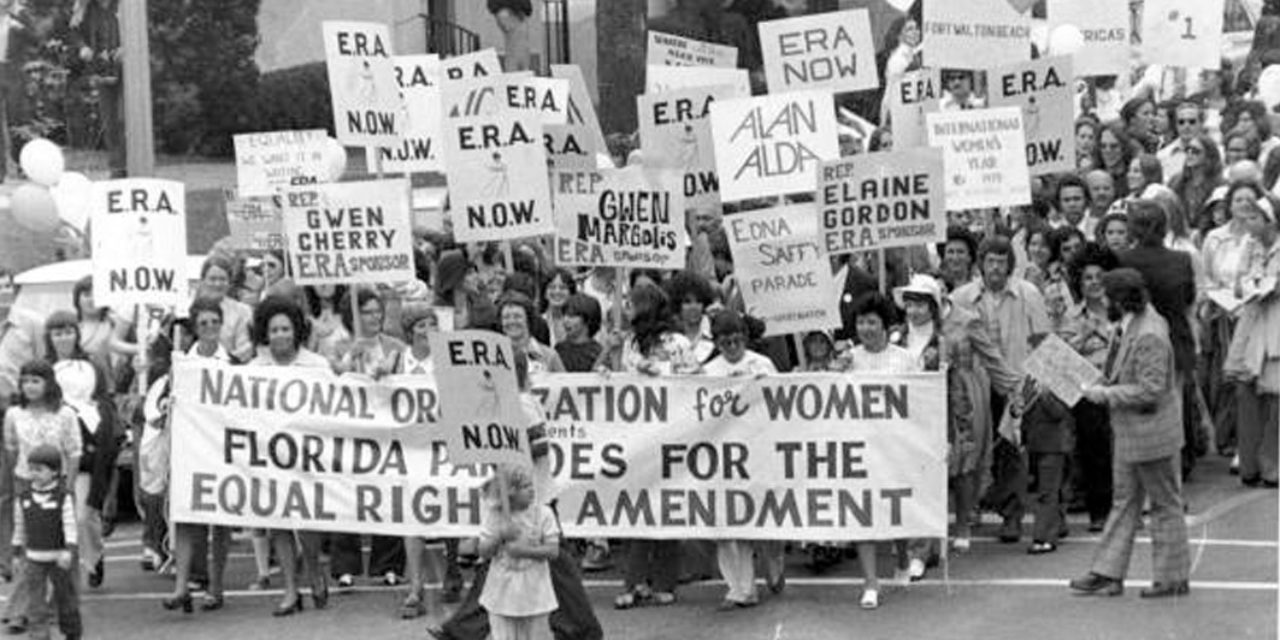 The Equal Rights Amendment (ERA) is dead, the U.S. Department of Justice opined recently as the Virginia legislature is close to becoming the 38th (and necessary final) state to ratify the controversial, abortion-driven constitutional amendment effort initiated by Congress in 1972. The only way to pass it is to start over, concludes Steven Engel, Assistant Attorney General, Office of Legal Counsel in a memo to the National Archives and Records Administration, which asked for the legal opinion in the wake of a potential Virginia ratification vote. The National Archivist, David Ferriero, would be the person asked to officially record the ERA as the 28th Amendment to the U.S. Constitution.

If you were around in the 1970s, you may recall the effort to pass the ERA. Initiated before the 1973 Supreme Court decision in Roe v. Wade, the ERA on its face purports to guarantee that “Equality of rights under the law shall not be denied or abridged by the United States or by any state on account of sex.”

The ERA’s broad and vague language made it seem innocuous, and supporters sold it as a symbolic step that America needed to take. What it was really intended to do, conservatives argued, was to prevent either the states or the federal government from banning abortion.

Liberals have denied any such connection. Conservative women such as Phyllis Schlafly argued at the time that not only would it promote abortion, it would take away existing legal protections for women, who could then, for example, be drafted or lose the right to child support. She also predicted, quite presciently, that an “equality” amendment would lead to same-sex marriage and allowing men to use women’s restrooms.

After an initial series of state ratifications in 1972 and 73, momentum slowed precipitously, possibly because of Roe. When Congress passed the ERA resolution, it also set a March 1979 deadline to obtain the necessary ratification by 3/4 of the states. As that deadline approached, only 35 states had ratified the amendment, but five of those had also rescinded their ratifications. Congress then passed a time extension until 1982, at which point no further states had ratified the ERA.

Liberals began an effort to revive the ERA in 2017 and 2018, when legislatures in Nevada and Illinois, respectively, voted to ratify the amendment. The renewed effort to ratify the ERA grew out of liberal fears that the Supreme Court might soon overturn Roe.

If you don’t count the five states who voted to rescind their original ratifications, the Nevada and Illinois votes put the number of ratifications at 37. Virginia, which became a Democrat trifecta in the last election (Governor, Senate and House of Delegates all controlled by Democrats), is expected to vote to ratify the ERA soon.

That’s what prompted the National Archivist to request the DOJ memo. ERA supporters will demand the ERA be enshrined legally as the 28th Amendment to the Constitution immediately upon ratification by Virginia. Lawsuits have already erupted for and against the legality of ratification.

The legal issues surrounding the ERA’s ratification are interesting because there aren’t that many court rulings interpreting the Constitution’s Amendment clause found in Article V. But the rulings aren’t complex either.

For example, Congress included a deadline for passage, and that deadline has since passed without the requisite 38 states ratifying the amendment. Can Congress do that? If the deadline is included only in the resolution but not in the Amendment itself, is it still effective? Are the five states who rescinded their ratifications permitted to do that?  The DOJ memo answers all these questions in the affirmative. So does constitutional expert Ed Whelan, the President of the Ethics & Public Policy Center.

And, apparently, so does Justice Ruth Bader Ginsburg, one of the most liberal, pro-abortion justices on the Supreme Court at the moment. In remarks she made last September at Georgetown Law School, she advocated for the ERA’s passage but stated “we’ll be starting over again collecting the necessary states to ratify it.” That’s because the Supreme Court took action in 1982 in an ERA-related case that relied on the assumption that the amendment was no longer viable after the 1979 and 1982 deadlines had passed.

The ERA was a ticking time bomb in 1972, and remains so today. Women’s rights are not only protected through the 14th Amendment’s equal protection clause (and don’t forget the 19th Amendment’s guarantee of women’s right to vote), but also by numerous federal statutes. Kristan Hawkins, President of Students for Life of America, noted for Fox News that the ERA would negatively impact a host of laws that have benefited women, including the Equal Pay Act of 1963; the Civil Rights Act of 1964; the Equal Employment Opportunity Act of 1972; the Federal Minimum Wage Act of 1974, and the Pregnancy Nondiscrimination Act of 1964.

The legal case against the ERA’s ratification looks to be stronger than the case for it. But nothing is guaranteed. The Daily Citizen will keep you up to date on events as they develop.