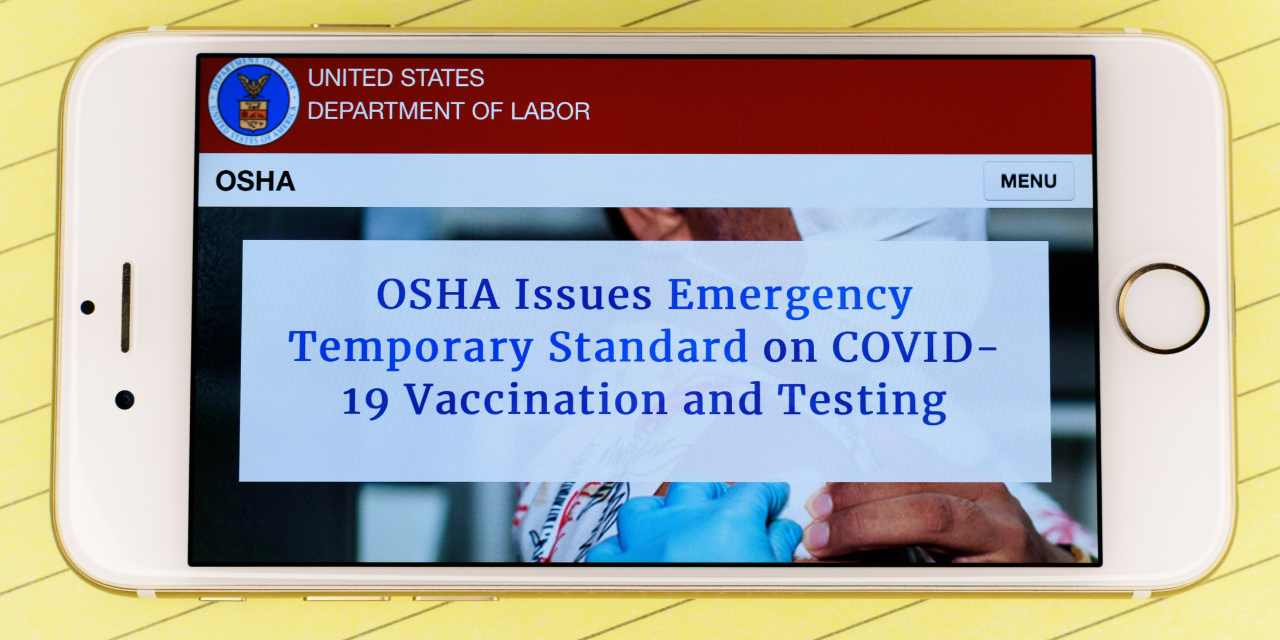 On November 11, the 5th U.S. Circuit Court of Appeals in New Orleans blocked the Emergency Temporary Standard (ETS), aka the mandate, issued by the U.S. Occupational Safety and Health Administration on November 5. Starting January 4, the ETS requires all employers with workplaces of 100 or more workers to demand their employees provide proof of COVID-19 vaccinations or else submit to weekly testing and mask-wearing.

This is actually the second ruling by the 5th Circuit in a week blocking the law while judicial review of the mandate proceeds. In legal parlance, the order blocking the ETS is called a “stay.” On November 6, the 5th Circuit granted a temporary stay while the parties submitted briefs surrounding the legal issues for the court as to whether the court should extend the period of the stay, which the court has now done in its second order.

The three-judge panel from the 5th Circuit that examined the arguments found that the challengers, which included individual citizens, private employers, state attorneys general from several states, and various religious entities, were “likely to succeed” on the merits of their arguments and would suffer “irreparable harm” if a stay was not granted.

The 5th Circuit was harshly critical of OSHA’s authority to issue the ETS. The legislation that created OSHA “was not … intended to authorize a workplace safety administration in the deep recesses of the federal bureaucracy to make sweeping pronouncements on matters of public health affecting every member of society in the profoundest ways,” the court’s ruling states.

“On the dubious assumption that the Mandate does pass constitutional muster – which we need not decide today – it is nonetheless fatally flawed on its own terms.”

An ETS by its very name indicates an “emergency” that cannot wait to be addressed by standard government action taken in due course. There’s no time for bureaucratic “red tape.” Yet, the court noted, the COVID-19 pandemic had been ongoing for almost two years before OSHA took action and, even then, spent nearly two months to issue the ETS after a request from President Joe Biden in September.

And rather than the ETS being carefully crafted, the court blasted its overwhelming impact.

“[R]ather than a delicately handled scalpel, the Mandate is a one-size-fits-all sledgehammer that makes hardly any attempt to account for differences in workplaces (and workers) that have more than a little bearing on workers’ varying degrees of susceptibility to the supposedly ‘grave danger’ the Mandate purports to address,” the court wrote.

Moreover, the ETS is “staggeringly overbroad,” according to the 5th Circuit. “Applying to 2 out of 3 private-sector employees in America, in workplaces as diverse as the country itself, the Mandate fails to consider what is perhaps the most salient fact of all: the ongoing threat of COVID-19 is more dangerous to some employees than to other employees.”

In addition to being “overbroad,” the ETS is also “underinclusive,” another problem the court noted. By limiting the mandate to employers with 100 or more employees, and not covering workplaces of less than 100 employees, the ETS may be easier to administer, but, according to the ruling, “this kind of thinking belies the premise that any of this is truly an emergency.”

As to potential constitutional problems with the ETS, the court noted, “the Mandate likely exceeds the federal government’s authority under the Commerce Clause because it regulates noneconomic inactivity that falls squarely within the States’ police power. A person’s choice to remain unvaccinated and forgo regular testing is noneconomic inactivity.”

The ETS may also violate the “separation of powers” principle because Congress did not clearly delegate the authority that OSHA is attempting to use here, the judges further noted.

“There is no clear expression of congressional intent in [the OSHA statute] to convey OSHA such broad authority, and this court will not infer one. Nor can the Article II executive breathe new power into OSHA’s authority—no matter how thin patience wears.”

And without a stay, the court observed, it is clear the petitioners in the case would suffer irreparable harm.

“For one, the Mandate threatens to substantially burden the liberty interests of reluctant individual recipients put to a choice between their job(s) and their jab(s). For the individual petitioners, the loss of constitutional freedoms ‘for even minimal periods of time . . . unquestionably constitutes irreparable injury’ (citations omitted).”

Companies would also suffer injury from the effects of the ETS.

“Likewise, the companies seeking a stay in this case will also be irreparably harmed in the absence of a stay, whether by the business and financial effects of a lost or suspended employee, compliance and monitoring costs associated with the Mandate, the diversion of resources necessitated by the Mandate, or by OSHA’s plan to impose stiff financial penalties on companies that refuse to punish or test unwilling employees,” the court noted.

The court concluded its ruling by granting the petitioners’ request for a stay. “Enforcement of the Occupational Safety and Health Administration’s ‘COVID-19 Vaccination and Testing; Emergency Temporary Standard’ remains STAYED pending adequate judicial review of the petitioners’ underlying motions for a permanent injunction. In addition, IT IS FURTHER ORDERED that OSHA take no steps to implement or enforce the Mandate until further court order.”

Where does this case go from here?

There have been similar challenges filed against the ETS in several other federal appellate courts, so the cases will be consolidated and assigned to one specific circuit, chosen via a lottery. That is, unless OSHA immediately appeals the 5th Circuit’s stay order directly to the U.S. Supreme Court.

We’ll keep you apprised on the progress of this litigation as it proceeds.