There have been four different books published over the last two years or so that seem, at first or second glance, to be totally unrelated to one another, but collectively address four critical issues in well researched and illuminating ways that all culturally aware Christians must know about.

Together, they address four of the most pressing, but little appreciated, issues facing the well-being of humanity itself. Each tells us extremely important things about our public life together and the troubling ways we are ordering our lives as human beings. This is why these seemingly unrelated books are so important as a set.

Two of them speak to the troubling ways we are (or are not) reproducing ourselves. The third addresses our confusion over our fundamental nature as male and female and the final volume addresses our freedom of belief and growing limitations on what is truth. Each of these, on their own, are monumental even foundational, issues. Taken together, they provide a remarkably prophetic voice so like the biblical Sons of Issachar who had unique insight of the times, we can know what the Church must do in the age God has placed us. 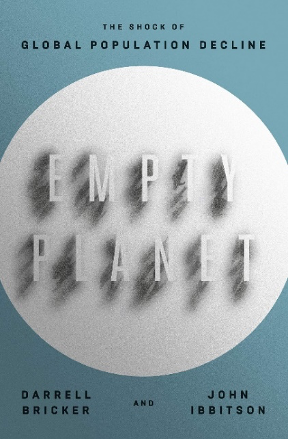 The first book is the most consequential because it speaks to the first command that God gave humanity: to go forth and multiply. This is Empty Planet: The Shock of Global Population Decline, written by two secular Canadian researchers. They systematically make the very persuasive case that rather than overpopulation being one of the most serious problems facing humanity, our greatest threat is precisely the opposite. From the start, they contend the overpopulation scare “is completely, utterly wrong.” Full stop. They explain, based on an impressive array of diversely authoritative data sources, “We do not face the challenge of a population bomb, but of a bust – a relentless, generation-after-generation culling of the human herd.” They spend the rest of the book explaining why “once that decline begins, it will never end.”

These researchers see the natural end of the world from where we presently stand, and it looks like too few people becoming moms and dads. In fact, since publication, their conclusion received truly stunning support in the form of newly published demographic research funded by the Bill and Melinda Gates Foundation. You can read about the further advances of the dire thesis in this article over at Quillette.

All of this makes it very clear that God knows what He’s talking about. His first command to “go forth and multiply and fill the earth” is very much still in effect, and for reasons that remain absolutely essential today.

2. Them Before Us: Why We Need a Global Children’s Rights Movement This curiously titled book, by two busy activist wives and mothers from Seattle, serves as a clarion call for us to think differently about how and why we form the families we do. It is a well-reasoned, meticulously argued case that adult desire, regardless of how pure and loving it claims to be, does not always form the healthiest family forms for children. These ladies pull no punches in making their case.

What is unique about this book is that it takes on both same-sex and heterosexual family forms. It argues afresh for the fundamental integrity of what family ought to be once we simply stop to consider the troubling choices we are making when adult desire is put before what children actually need. Hence the title.

The essential rubric they use is that every child has a right to the love and care of the mother and father whose progeny they are?. Period. They demonstrate that every form of the celebrated “modern family” – gay or straight – denies the child this basic right and is thus, illegitimate.

Second, they assert that no adult has a right to a child that is not his or her biological offspring. As such, “every departure from the married-mother-father household is, at its core, a threat to the rights of children.”

But it is not only single-parenting by choice or the brand new same-sex family that creates this problem. They take on the divorce culture as well as the exploding sperm/egg donation-surrogacy industrial complex as equally problematic for society and children.

This is the first book to address all these emerging issues together in such a thoughtful way and does so with clarity, conviction, and compassion. It is one of the most important and ideologically challenging books on family formation in decades from two very unlikely voices. An absolute must-read for all students of the family. The gender issue has taken the world by storm with head-spinning speed and is taking up nearly all the oxygen in the cultural room at present.

Few people are writing on this development with the kind of razor-sharp incisiveness as The Wall Street Journal’s Abigail Shrier. In Irreversible Damage, Shrier details an extremely troubling and anti-human trend that has developed in the last few years with our girls: Many of them suddenly don’t want to be girls anymore and important power centers are taking incredibly dangerous and ill-advised medical steps to help them actively destroy their physical and mental womanhood. It’s not that they want to become boys. Disturbing numbers of them want to be “nothing.” Shrier explains these girls “want to be seen as ‘queer’… They flee womanhood like a house on fire, their minds fixed on escape, not on any particular destination.”

So what is happening here?

Shrier is highlighting the trans craze, not as merely a curious and trendy hop across the river from female to male or vice versa, but a wholly new kind of misogyny. The words of one leading therapist caring for gender dysphoric patients are emblematic of what Shrier has been witnessing. The young girls this therapist sees at her clinic are in great emotional pain. She explains, “A common response that I get from female clients is something along these lines: ‘I don’t know exactly that I want to be a guy. I just know I don’t want to be a girl.’” Something very profound and troubling is happening to what it means to be one essential half of humanity.

Irreversible Damage is a chilling examination of this troubling development among our girls and a pointed challenge to the irresponsible ways far too many adults are responding to it.

4. Live Not By Lies: A Manual for Christian Dissidents While each of the previous three books address critical angles on what it means to be human and the failures we are making as custodians of this critical natural trust, Live Not By Lies is different, but not altogether. It is a book on the nature of truth, what we know to be true in the depths of our bones, and the importance of our stalwart fidelity to it. It demonstrates new ways all this is under attack today.

Rod Dreher, a senior editor at The American Conservative and effusively unrepentant blogger, highlights how the “soft totalitarianism” of political correctness we have been witnessing in the West over the last few decades has been calcifying into something deeply pernicious. This is the increasing political, legal, economic, and social pressure to live by and consent to new “truths” we know to be lies.

What got Dreher thinking about this is comments from too many of his friends that grew up under recent totalitarian regimes in Eastern Europe. These friends told him “Don’t you see that what’s now happening here in America is precisely how the specter of thought control overtook our old countries decades ago?” To be honest, Focus on the Family hears the same warnings from Asian leaders who grew up under the Chinese cultural revolution. They recognize what is happening.

Dreher meticulously documents the evidence of this turn, explaining “What unnerves those who lived under Soviet communism is this similarity: Elites and elite institutions are abandoning old-fashioned liberalism, based on defending the rights of the individual, and replacing it with a progressive creed that regards justice in terms of groups.” He adds, “A utopian vision drives these progressives, one that compels them to seek to rewrite history and reinvent language to reflect their ideals of social justice.” Say the wrong thing, and you could lose your livelihood, reputation, and basic freedoms.

Dreher’s call to all good people is, in the spirit of Soviet dissident Alexander Solzhenitsyn, to reject this evil authoritarianism in America today and refuse to live by and say things we know to be lies just because we will be bullied if we do not.

He is precisely right. Each of us, by result of taking our breath at this very time in history, have come to the Kingdom for such a time as this. And collectively, these four books show us how we can understand these times with moral clarity and act as agents of truth and humanity in these uniquely challenging times. We owe each of the authors a debt for their own boldness and insight.