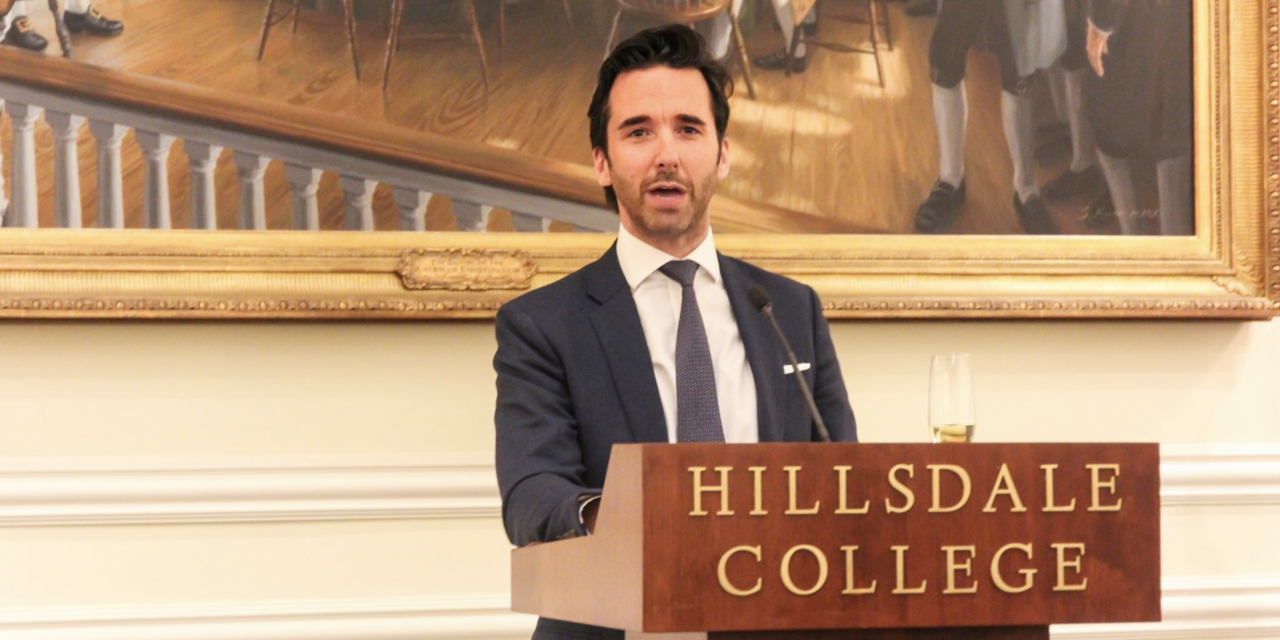 A question and answer that followed the talk was marked by civility and a desire to engage with Azzerad, perhaps because many of the students had never heard a viewpoint like his, a counter-narrative to current, academic dogmatism.

But when some students and alumni later reacted negatively, the administration quickly denounced his talk.

In the name of the “Benedictine values of hospitality and respect for all people” and the college’s desire to “protect the diversity of opinion critical to our students’ educational growth,” the administration announced a plan whereby any invited speaker must be approved by the colleges president and cabinet.

This is becoming par for the course in much of the academic world.

According to Keith Whitaker, Ph.D., another presenter at the conference “the administration hastily forbade CPET [St. Vincent’s Center for Political and Economic Thought] from publishing the videos of all the presentations.”

The videos were finally posted after an outcry from others over academic freedom, which President Rev. Paul Taylor says the school treasures. Azzerad’s presentation, is available on YouTube.

So what did he say that was so offensive?

Azzerad is an assistant professor and research fellow at Hillsdale College’s Van Andel Graduate School of Government in Washington, D.C. The talk was part of a two-day conference, “Politics, Policy and Panic: Governing in Times of Crisis.”

While many academics and activists decry America as a country controlled by “white supremacy” and “systemic racism,” Azzerad said that’s not the case. He argued that blacks, with women running a close second, where the most privileged individuals in our culture.

The speaker never denied America’s racist past – mentioning it several times. And he never denied that racism still occurs.

He explained that in the academic world of “Privilege Studies,” privilege referred to “the benefits bestowed upon oppressors in an oppressor system.” Academics explain that America is privileged by whites, for whites, based on past mistreatment of blacks and on disparities in outcomes.

Azzerad says privilege theorists have “always and only” one explanation for all disparities: Racism. He said you get accused of racism if you disagree or if you say this is part of the problem – but not all of it.

But there are other definitions of privilege, which also stands for inherited social power or capital. Do you come from a good family and community? Then you have inherited privilege. Of course, he stated, privilege, or the lack or privilege, can partly be due to racism or America’s racist past.

But this privilege is not always tied to race, he argued, as evidenced by former President Obama’s daughters, who were certainly raised with high social and economic privilege.

Azzerad said privilege may also refer to rights and benefits that only some people get. While in the past blacks were denied rights and benefits, the legal basis for this began to be destroyed in the 1960s, with the Civil Rights Movement, as the U.S. abolished formal, legal discrimination.

The current “anti-racist” movement denies any real progress in America and says all “privilege” is with whites – even if you can’t see it.

But even before the 60s, he explained that the government in the 1940s, followed by elite schools like Harvard in the 1950s, began practicing affirmative action, giving preferences to blacks in hiring and admissions.

The Canadian born Azzerad, who views American culture as an outsider, said that he’s noticed “a prohibition on ascribing any blame against black people for their collective lot in life” and that Americans have a “deep discomfort with talking about race.”

He called for real justice in our country, not the pursuit of some ambiguous “social justice.” Azzerad explained that the U.S. was built on standards and the rule of law, albeit imperfectly or badly practiced, and on meritocracy – the ability to rise through effort and achievement.

Other problems in the black community include fatherlessness, crime and low academic achievement, and “nihilistic alienation” – the belief that “America hates us.”

He called for “a government that equally secures the rights of all,” “no intentional, invidious discrimination in the public sector,” and “civility and politeness” for all.

While St. Vincent officials wrote several letters about Azzerad’s talk, none of them addressed his key arguments. They simply stated that his remarks were hurtful and divisive; promulgated a “view which may be interpreted as a form of invidious discrimination which inherently degrades the sanctity of human life,” and included comments that “diminished the accomplishments of American Black leaders.”

Ironically, they only illustrated his point: No one must say anything disparaging about blacks.

Azzerad stated that this form of black privilege – and policies based on it – helps elites but not black citizens who really struggle. Elites get to feel good about themselves because they’ve taken the right “posture” – not because they’ve helped people or changed real outcomes.

Whittaker encouraged people to watch the lecture for themselves. He said that the talk helped “pull back the veil,” revealing that to be ‘Anti-Racist’ means, by the anti-racists’ own tortured logic, to be anti-white.”