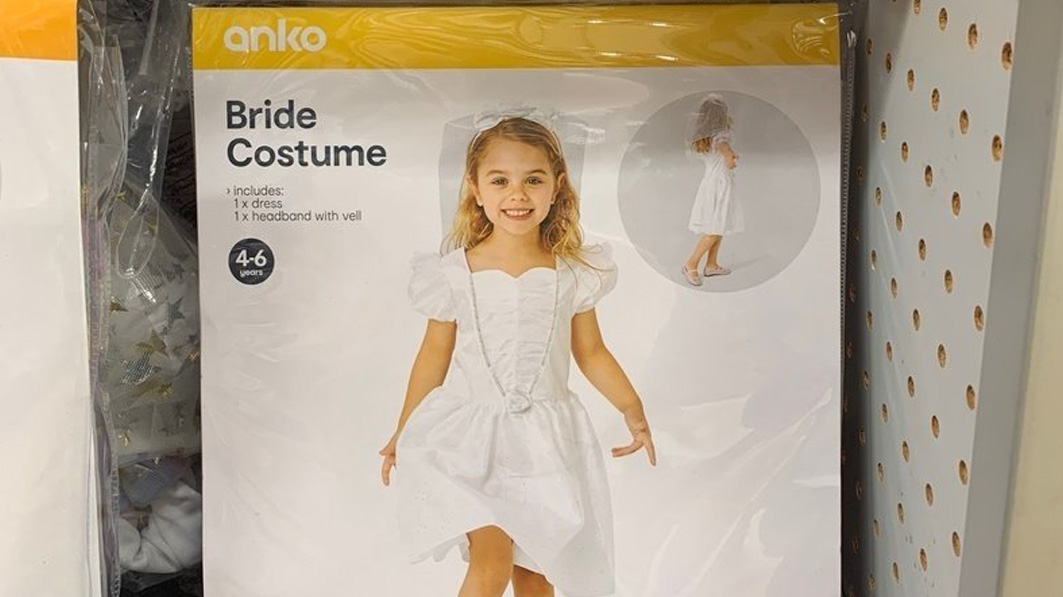 Kmart’s decision to pull a child’s bride Halloween costume in Australia may have been a social justice victory for one mother, but some parents are calling foul.

Dressing up for Halloween is a time-honored tradition for many children. Boys often dress like cowboys, police officers or in superhero costumes, but for girls it’s often the desire to look and feel like a princess or, in some instances, a bride. For a little girl, the interest in dressing up as a bride is completely innocent. But one mother saw it as an effort to normalize forced child marriage.

Her conclusion seems like a bit of a stretch. After all, it’s just a costume.

It happened in Australia where Shannon B. created a Change.org petition after seeing a child’s bride Halloween costume at her local Kmart. In her petition, she wrote:

“This is beyond inappropriate and offensive and Kmart have (sic) a social responsibility to pull this item off their shelves immediately,” she said. “Child marriage means child abuse and torture in its worst forms—paedophilia, child rape, child slavery, child sex trafficking.”

While child marriage is a problem in certain areas of the world, and no one doubts the horrors of what some girls experience, it seems like the mother is overreaching a bit here.

If Shannon shared the content of her post with the average Australian four-year-old, they would have absolutely no idea what any of it means. Most likely, a little girl might’ve been in the bridal party for a family member or saw a picture of her mother in a wedding dress and wanted to feel special too. No one is suggesting that dressing a little girl up in a fake wedding dress is somehow a sign of approval for child marriage. What happened to letting kids be kids?

There are also many other more questionable costumes. A quick Amazon search reveals witch costumes, royal vampire costumes, miss reaper tween, freakshow ring mistress and a zombie deluxe child costume, bloody axe included. Perhaps if the costume was for a zombie bride it would’ve been better for this Australian mom. These outfits seem a little more controversial than something as simple as a bride.

If Shannon wanted to bring attention to the plight of child brides around the world, there are some more constructive avenues that she could’ve explored. An option would be to post the picture and ask people to pray for the children who have been exploited as child brides and express gratitude that this does not happen in Australia. A way to bring attention to the cause without making too much of a fuss.

But there is possibly another reason that some people objected to this type of costume. It doesn’t have to do with the dangers of exploiting child brides but of the belief that the dream of becoming a wife is somehow less important than pursuing a career.

In a statement by World Vision Australia, Mercy Jumo said that Australians should be “affirming young girls and encouraging them to aspire to reach their potential.”

Her statement could imply that a little girl who dreams of becoming a wife and a mother is not going to reach her full potential. Sometimes it seems like there is a constant push to have little girls dream of being an astronaut, lawyer or the future president of the United States. While there is nothing wrong with those dreams, they should be treated with equal weight as a little girl who is excited to become a wife and a mother. That just doesn’t seem to happen much anymore.

It looks like other parents agree, at least to reinstating the costume. A counter-petition has managed to gain 3,000 signatures, about 2,800 more than the initial petition. Hopefully, Kmart will make the right decision and put this bride costume back on the shelves. The plight of child brides around the world is very real, but in this instance, let the Australian girls be girls. The adults can handle the problem of child brides.