Searching for Norman Rockwell’s America in the 2020 Election 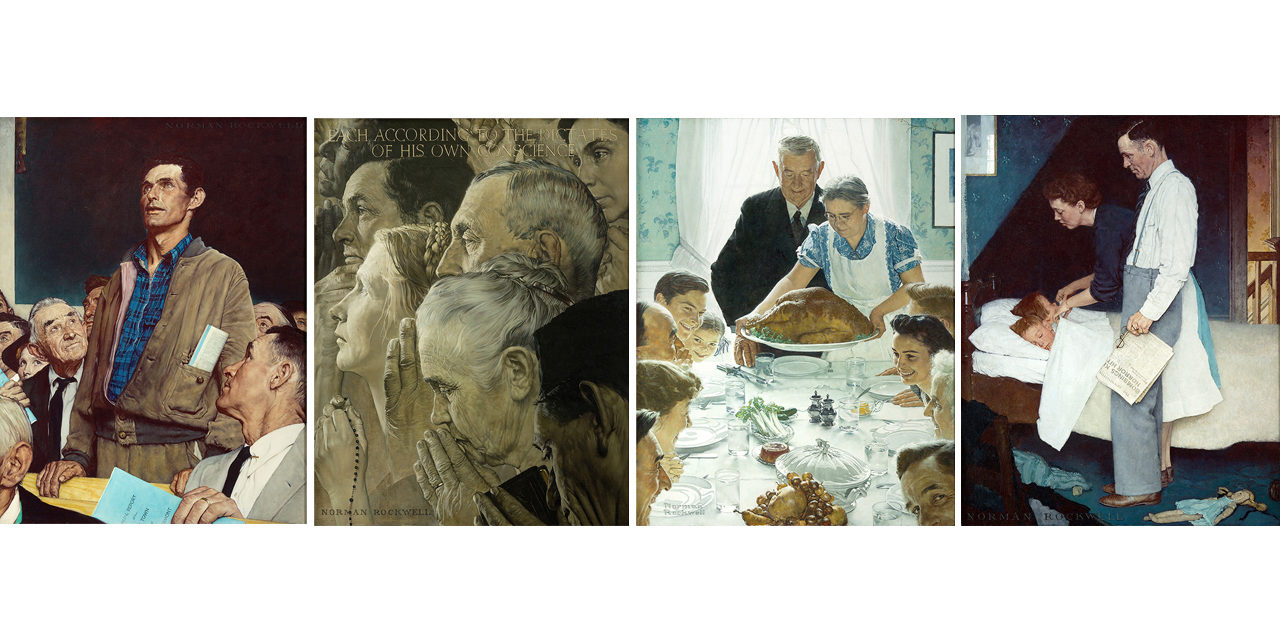 The famed illustrator Norman Rockwell has been dead for 42 years, passing away at the age of 84 back in 1978. His nostalgia-laced art became synonymous with the Saturday Evening Post, the Boy Scouts and all things American.

Rockwell’s legions of fans hailed his work for eliciting inspiration and aspiration – shining a light for well over a half-century on the very best of the nation’s ideals.

His critics lambasted his efforts as overly simplistic and unrealistic – sentimental sugar-coating that covered up the country’s sins.

“Maybe I grew up and found the world wasn’t the perfectly pleasant place I had thought it to be,” the painter once reflected. “[So] I unconsciously decided that if it wasn’t an ideal world, it should be, and so I painted only the ideal aspects of it, pictures in which there were no drunken fathers, or self‐centered mothers, in which, on the contrary, there were only foxy Grandpas who played baseball with the kids, and boys fished from logs and got up circuses in the backyard. If there were problems, they were humorous problems.”

As President Donald Trump and former Vice President Joe Biden enter the final week of the 2020 presidential campaign, I’ve been thinking about Norman Rockwell and the nation he painted, wondering how we have lived up to his expanded vision.

Norman Rockwell isn’t on the ballot, of course, but many of the ideals he so beautifully featured are – and from the presidency right down to your congressional representative, judges and the local referendums you sometimes need translated.

Back in the spring of 1942, Rockwell, moved by President Franklin Roosevelt’s address framing the fight of World War II as a battle for America’s four freedoms – the freedom of speech, freedom of worship, freedom from want, and freedom from fear – decided to embark on a four-painting series highlighting the essence of FDR’s charge.

But how to capture so much on the limited canvas space?

“Somehow I just couldn’t get my mind around it,” he once remembered.

Rockwell soon found himself attending a local town meeting, during which time an ordinary citizen rose from his chair to share an unpopular point of view. The illustrator returned home and was awakened in the middle of the night, inspired with the thought he could paint the four freedoms from the perspective of ordinary people, just like the courageous man he witnessed only hours before.

By 1943 “The Four Freedoms” were touring the nation, helping to raise funds by the selling of war bonds – and reminding people what America was fighting for in both the Atlantic and Pacific theaters of battle.

The late illustrator also tackled more difficult topics, including racism. In fact, his 1964 painting, “The Problem We All Live With,” featured a six-year-old black girl named Ruby Ridges walking with U.S. marshals to a previously all white school. It quickly became a highly celebrated civil rights work of art.

But nearly a half-century since his death, does Norman Rockwell’s America still exist?

It might be chic to mock morality, lampoon goodness and dismiss as naive what could be – but it’s a mistake, and on many levels.

From coast to coast, our nation is filled with men and women who embody the Rockwellian ideals – and then some.

Like many of you, my heart still swells when I see flashes of Rockwell’s America – the Stars and Stripes fluttering in the breeze, or hear a band striking up a patriotic tune or see brave citizens standing up for innocent pre-born life in the face of radicals who demean and attempt to destroy.

Better yet, I’m encouraged because our nation is still filled with people whose Christian faith frames and remains at the center of their lives.

I just hope and pray enough of them vote on November 3rd.