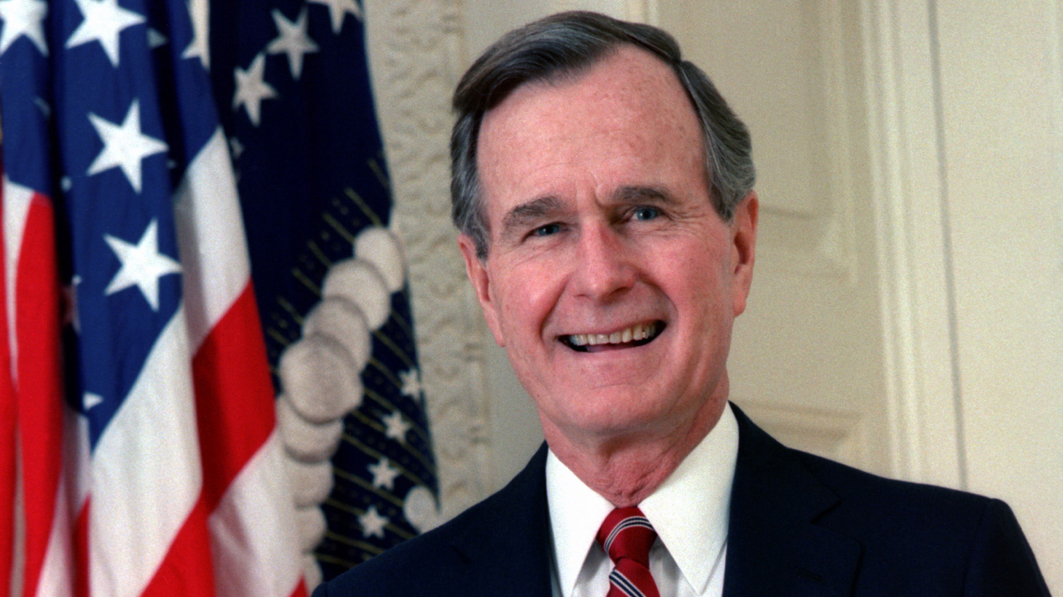 I had been working as the deputy director of The White House Office of Public Liaison for President George W. Bush in 2001 for less than a year when I found myself late for a 10 a.m. meeting. I had just concluded a teleconference and was departing my office for the meeting just a few doors away in the Eisenhower Executive Office Building.

My large mahogany door swung open into a vast hallway, and I (literally) caught myself short before nearly bumping into a man whose back was to me, just outside my office. He was standing all alone, looking closely at the door across the hall to discern if he in fact had the right office suite number for the friend he was seeking.​

Turning around, he asked, “Say, can you tell me if this is the Office of Public Liaison please?” I was both stunned and startled all at once. It was an extremely familiar person and an equally familiar voice, that of President George H.W. Bush. He had come to the White House complex to visit his son, President Bush 43, and with a little extra time in his schedule, had come to Public Liaison to spend a little time with a former assistant who was now a deputy in our office.

It was as if we were in Mayberry that morning, and he was just stopping by the barber shop to pay his respects to a friend. The informality of it was endearing.

“President Bush, it is a great honor to see you here, and I’d be happy to walk you over to see your friend,” I said, and began to promptly lead the way. But before I had taken two or three steps, he said, “Now, tell me who you are and what you do here?” He had surprised me for a second time that morning.

First, no one expects to walk out of his office and meet a former President of the United States in the hallway – even at the White House. And second, no one expects a President to essentially refocus away from the person he intends to meet in order to have small talk with someone he’s never met.

I proceeded to give a short but not abrupt description of who I was and a little bit about my role. He proceeded to share with me the two people in Public Liaison in his own administration who had had similar roles to mine, and then began to ask other questions about some of the faith groups I worked with; some of the leaders within American conservatism I was in touch with; and when I conveyed I had worked for Dan Coats in the U.S. Senate for a decade, he shared a short riff on four other GOP senators he had known from Indiana and in particular one congressman really admired, the Democrat Lee Hamilton.

Also, he bridged our conversation into a series of mini-questions he had about my wife and our two sons – where we lived, where they went to school, etc – and when I mentioned that our oldest son’s passion was baseball, even at a very young age, the President lit-up and wanted to know what position he played and whether he was right- or left-handed.

Being mindful of his time, and what had developed into a really remarkable and unplanned hallway conversation, I asked him if he might give his autograph to me? Sure, he said, and I pulled from my folder a small piece of stationery from the Union League Club in New York City.

He was intrigued by the stationery masthead; knew the Club well; shared his recollection of an important speech he had given there a number of years before-hand; and had recalled the Club’s historic connection/association with Abraham Lincoln and the Civil War era. I mentioned that a highly-regarded Lincoln scholar – a New Yorker — was my favorite of my Lincoln biographers, and the President proceeded to tell me that he not only knew the writer well but that he and Barbara Bush, the former First Lady, had been in semi-regular touch with him through the years.

Losing all track of time, I realized I was not only very late for the meeting but also had inadvertently dominated the President’s time, kept, him from seeing his friend, and I apologized. “Not at all,” he said. “I’ve really enjoyed this, and I wish you well and good luck. Thanks for everything you are doing, and above all, thank your wife and boys for what they will be sacrificing as you work here.”

He told me that he had spent a lot of time in the Eisenhower Building over the years, first as Vice President and then as President, and called it “a grand old building,” which is undoubtedly is – named for the Commander in Chief under whom he had served as an 18 year enlistee in World War II. Ike.

What had I wished I had said? Thanks for nominating Clarence Thomas; thanks for showing such statesmanship in presiding over the peaceful end of the Cold War; and above all, thanks for focusing like a laser beam on ‘the permanent things’ — your wife, your children, and your grandchildren. For all the importance of the presidency and life on the international stage, you made your marriage and your family a priority year upon year — rare enough in American politics — and it rightly all came back to you in a marvelous way across more than nine decades of life.

As the paterfamilias of one of the greatest American families in our history, George H.W. Bush modeled the kind of humility, humanity, and integrity that is now, and forever shall be, the gold standard — and who was never too busy to spend a few unscheduled hallway minutes to chat with a young White House aide who was late for a meeting and whose gratitude, long years later, abides.

His natural grace was limitless and without peer.

Mr. Bush’s great-souled magnanimity arose not from his privileged upbringing, at least not mostly. Rather it arose from his Christianity. And it was from that foundation, even in the hurly-burly that is American politics, that his courage and commitment to justice flowed. How refreshing, and ever-new.