The Remarkable & Tireless Pursuit to Bring the Bible to the Moon 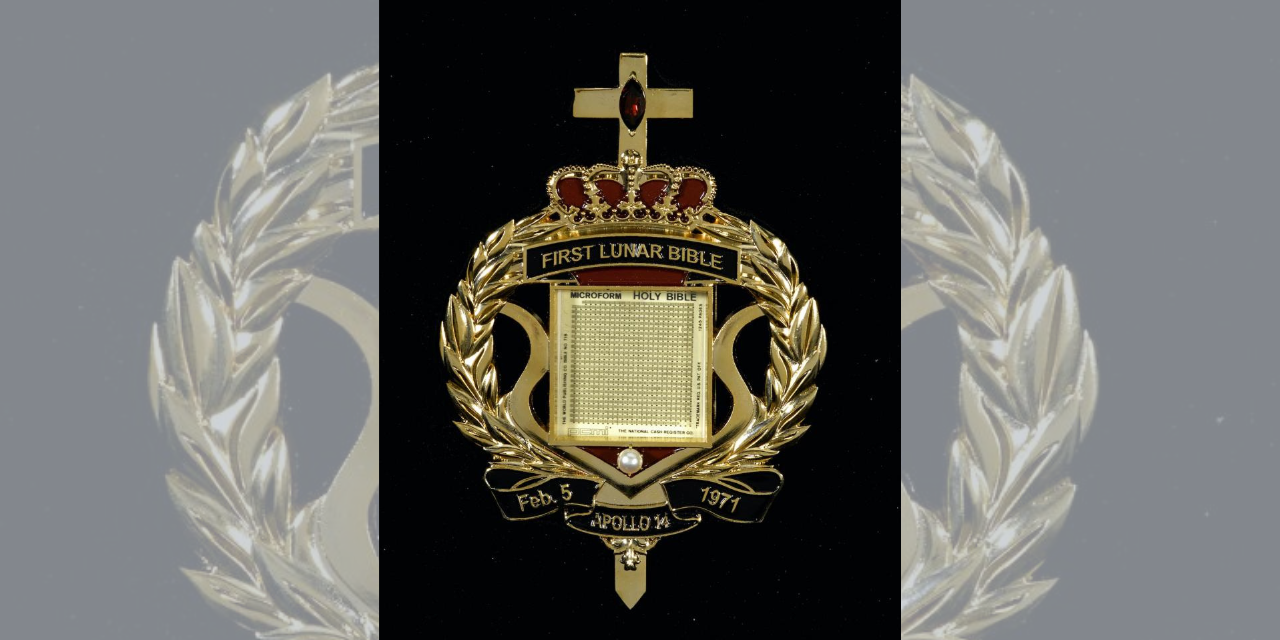 “To all of us who gaze up at the moon, dreaming of the day humankind returns to the lunar surface … folks, we’re here,” said former senator, astronaut and NASA’s administrator, Bill Nelson.

Scheduled to last 42 days, the capsule at the center of the mission contains mannequins and will capture and record a wide range of data gathered across the next month and a half. The information will help scientists plot, plan and make good on our promise to send astronauts to the lunar surface by 2025.

The prospect of space exploration has fascinated us for generations, even long before President John F. Kennedy pledged back on September 12, 1962, to send a man to the moon and return him safely to earth. But spurred on by the Soviet Union’s launch of the first artificial satellite Sputnik in 1957, there’s been both a romance and an international rivalry to it all for more than half a century.

The thrill of pioneering exploration into the unknown, discovering and detailing what mankind only once dreamed about, is something that’s hard to resist. For Christians, though, the subject and search of the heavens are of even greater significance.

We read in Genesis that God gave us “dominion” over the whole earth, calling men and women to populate and “subdue” it (1:26-28). This includes permission and perhaps even a push to use His resources to learn as much as we can regarding all dimensions of His wondrous creation.

Today’s younger generations, growing up in a decidedly secular and post-Christian culture, may not know that once upon a time, NASA seemed to acknowledge that God, not man, was the center of all things.

Case in point: there was once even a project to bring the Bible to the moon – a quest that was born out of a space-related tragedy.

The year was 1965 when astronaut Edward White II, a devout Christian, became the first American to ever walk in space. Stepping out of the Gemini 4 capsule on June 3rd of that year, attached by a 25-foot tether, the Texas native spent twenty minutes floating above the earth. What most people didn’t know was that he was carrying in his pocket that day a Star of David, a Saint Christopher medal, and a cross.

He emerged from the exhilarating experience with a goal to one day bring a Bible to the moon. Due to weight and other limitations on gear, he knew he’d have to come up with a way to create a very small version. He was determined to figure it out.

White’s professional success at NASA positioned him to be selected for the Apollo 1 mission, scheduled for February 21, 1967. But a flash fire on the launch pad during a training exercise in January killed the decorated astronaut, along with two others – Virgil “Gus” Grissom and Roger Chaffee.

Enter the Reverend John M. Stout – a former missionary to Brazil who began his overseas work ministering to people afflicted by Yellow Fever. During his time in South America, he helped launch orphanages, hospitals and schools. Highly educated and an astronomy guru, too, Stout helped the U.S. government to secretly track Russia’s Sputnik amidst his missionary work.

Reverend Stout would later accept a job at NASA as a senior information specialist, but only on the condition that he could also serve as chaplain to the growing staff. Knowing White’s dream, Stout decided after the deaths of his three friends to help get the Bible to the moon.

It would take four years and several fits and starts – but White’s vision was finally realized during the Apollo 14 mission in early 1971.

But even before that, Stout’s ministry to NASA’s staff bore fruit. Following the Apollo 1 fire, Stout launched the “Apollo Prayer League” – a consortium of Christians who believed in the power of prayer. Each member was asked to invite five friends to join and pray – and then those five were asked to invite five more. Before long, there was an army of prayer warriors asking the Lord to bless the Apollo program.

Many people are surprised when they learn that the three NASA astronauts (Bill Anders, Jim Lovell, and Frank Borman) who were the first to travel to the moon, actually read from Genesis on the Apollo 8 mission. It was Christmas Eve of 1968 when the three men took turns reading the first ten verses describing the creation story.

It’s been suggested the event was the most viewed of all time with more than a quarter of the earth’s population tuned in. After a very difficult year, including nearly 17,000 deaths in the Vietnam War and the assassinations of Dr. Martin Luther King Jr., and Robert Kennedy, many felt the poignant message “saved” 1968.

During the Apollo 11 mission in 1969, astronaut Buzz Aldrin took communion after landing on the surface of the moon. Before taking the elements, the Presbyterian elder read John 15:5: “I am the vine, you are the branches. Whoever remains in me, and I in Him, will bear much fruit, for you can do nothing without me.”

Bringing the Bible to the moon became a possibility with the advent of microfilm technology. All 1,245 pages and 773,746 words of the King James Version of the Scriptures were now on a piece of film the size of a postage stamp.

Attempts to get the Bible to the moon surface on the Apollo 12 and 13 missions hit various snags, but 212 copies were part of the lunar module payload that landed on the moon on February 5, 1971. White’s dream and Stout’s goal had been realized.

Eugene Cernan, who passed away in 2017, was the last man to walk on the moon back in 1972. Before stepping back up into the module, the mission commander stated:

“As I take man’s last step from the surface, back home for some time to come – but we believe not too long into the future – I’d like to just say what I believe history will record. America’s challenge of today has forged man’s destiny of tomorrow. And as we leave the moon … we leave as we came, and, God willing, we shall return, with peace and hope for all mankind.”