Twitter Continues Crusade Against Science in Purge of Biological Reality 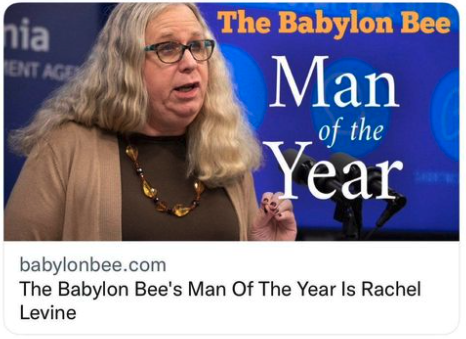 The folks over at Twitter have a beef with biology and anyone who affirms the unchangeable, unalterable, inherent reality of male and female.

The Daily Citizen reported earlier this week that Twitter had suspended the account of The Babylon Bee, a satirical Christian website, for a post on March 16, 2022 that read, “The Babylon Bee’s Man of the Year is Rachel Levine.”

The Bee’s post satirized USA Today’s choice of Dr. Rachel Levine as a “National Honoree” for its “Women of the Year 2022.”

Dr. Levine “was born male, lived as Richard Levine for more than 50 years, married, and fathered two children. The doctor began ‘transitioning’ around 2008 and announced his ‘transgenderism’ around 2011.”

Dr. Levine is currently serving as the United States assistant secretary for health at the U.S. Department of Health and Human Services (HHS).

According to Twitter’s rules and policies section, it’s against Twitter’s speech codes to “misgender” or “deadname” a “transgender individual.”

These are ideological buzzwords made up in the last few years of human experience, and are used as weapons. Their use should always be resisted.

The term “misgendering” is commonly used to refer to the use of a “transgender” individual’s biologically based pronouns instead of their new “preferred pronouns.”

But that’s a misnomer. In reality, it’s “misgendering” someone to refer to them with pronouns that don’t correspond to their biological sex.

And “deadnaming” refers to the use of a “transgender” individual’s original given name, rather than their new preferred name.

No one should be forced to use words they know are false.

“We’re not deleting anything,” wrote Seth Dillon, CEO of The Babylon Bee. “Truth is not hate speech. If the cost of telling the truth is the loss of our Twitter account, then so be it.”

Dillon pointed out that Twitter could “of course, delete the tweet themselves. But they won’t. It’s not enough for them to just wipe it out. They want us to bend the knee and admit that we engaged in hateful conduct.”

The Bee has appealed Twitter’s censorship of their account, but to no avail. The social media company denied their appeal, writing, “Our support team has determined that a violation did take place, and therefore we will not overturn our decision.”

Twitter has now also locked the account of Charlie Kirk, who tweeted that Levine “spent 54 years of his life as a man.”

Tucker Carlson’s Twitter account was also suspended after he commented on the suspension of The Bee and Charlie Kirk, writing, “But wait, both of these tweets are true.”

The Bee, Kirk, and Carlson have stepped into the exact same waters that The Daily Citizen did back in January 2021, when Twitter locked out our account for stating the truth that Dr. Levine is “a man who believes he is a woman.”

According to the overlords at Twitter, that simple statement of biological reality constituted “hateful conduct.” They also accused us of “promoting violence” against Dr. Levine on the basis of his “gender identity.”

On its about page, Twitter gives lip service to the freedom of speech.

“Twitter is an open service that’s home to a world of diverse people, perspectives, ideas and information,” Twitter claims. “It matters to us that people have a free and safe space to talk.”

But as these incidents of censorship demonstrate, that statement is purely a façade.

The West is currently undergoing a “transgender moment,” where basic biology has been deemed “discriminatory” and “bigoted.”

You can’t dissent from the “new orthodoxy” of gender ideology on social media platforms. If you do, expect to be banned.

Currently being considered for the U.S. Supreme Court, Judge Jackson this week told the Senate Judiciary Committee that she couldn’t provide a definition for the word “woman” because she’s “not a biologist.”

During the Kavanaugh confirmation hearings, we were told we must believe all women. Today we can’t even define women.

Strangely, the White House has said that if confirmed, Judge Jackson will be the “first Black woman” to serve on the Supreme Court. But how can Judge Jackson be the first of something she can’t even define?

It’s important for Christians to realize that we live in strange times. Strange tides have come our way.

We haven’t asked to be tasked with the responsibility of defending the inherent reality and goodness of male and female as two distinct, yet complementary sexes.

Previous generations of Christians would never have conceived that we would be at this cultural moment.

And we must all decide how we are going to respond. With truth and courage? Or with cowardice and silence?