A Uniquely Christian Understanding of the World-Shifting Power of Motherhood We just finished celebrating Mother’s Day on Sunday. We honored her with flowers and breakfast in bed. That means we can put appreciating mom on the shelf until next year, right?

To do so simply sentimentalizes motherhood. Mothers are more than a feel-good Hallmark event. And all Christians should recognize how central motherhood is to our own faith.

Of course, mothers do nothing short of making humanity and they do so every day. Look around you and everything you see in the human world that has been created by human hands, a mom is responsible for in some significant way. If a certain woman did not become a mom, that thing you are enjoying using or looking at would not exist.

Mothers are the gatekeepers of humanity. Literally. Thus, motherhood is the greatest natural power in the world, for mothers make humanity happen.

But this is not just true for humanity though. It is also true of our Christian faith.

If your children or an unbeliever asked you, “Where did Christianity begin?” what would you say? Think carefully about that answer. The Middle East? In a manger? In an Upper Room at Pentecost? On a cross or in an empty tomb?

Nearly none of us would answer “In a mother!”? But that is precisely the right answer!

The center of Christianity is not simply just “Jesus” but the fact that God entered humanity in a historical man who was fully God, and also fully man. This fact uniquely sets Christianity apart from all other faiths and philosophies. Because God became man, Christianity is the only belief system that truly bridges the divide between heaven and earth, spirit and flesh, the lost and the redeemed, and between sin and salvation. And it does so in one man: Jesus of Nazareth.

And where did this man first show up? Not to be baptized in the Jordan by his cousin. Not as a child confounding the learned Jewish elders on the Synagogue. Not even as a baby in the Christmas manger.

The fact is Christianity started around nine months prior.

And Mary said to the angel, “How will this be, since I am a virgin?”

And the angel answered her, “The Holy Spirit will come upon you, and the power of the Most High will overshadow you;

…therefore the child to be born will be called holy—the Son of God.” 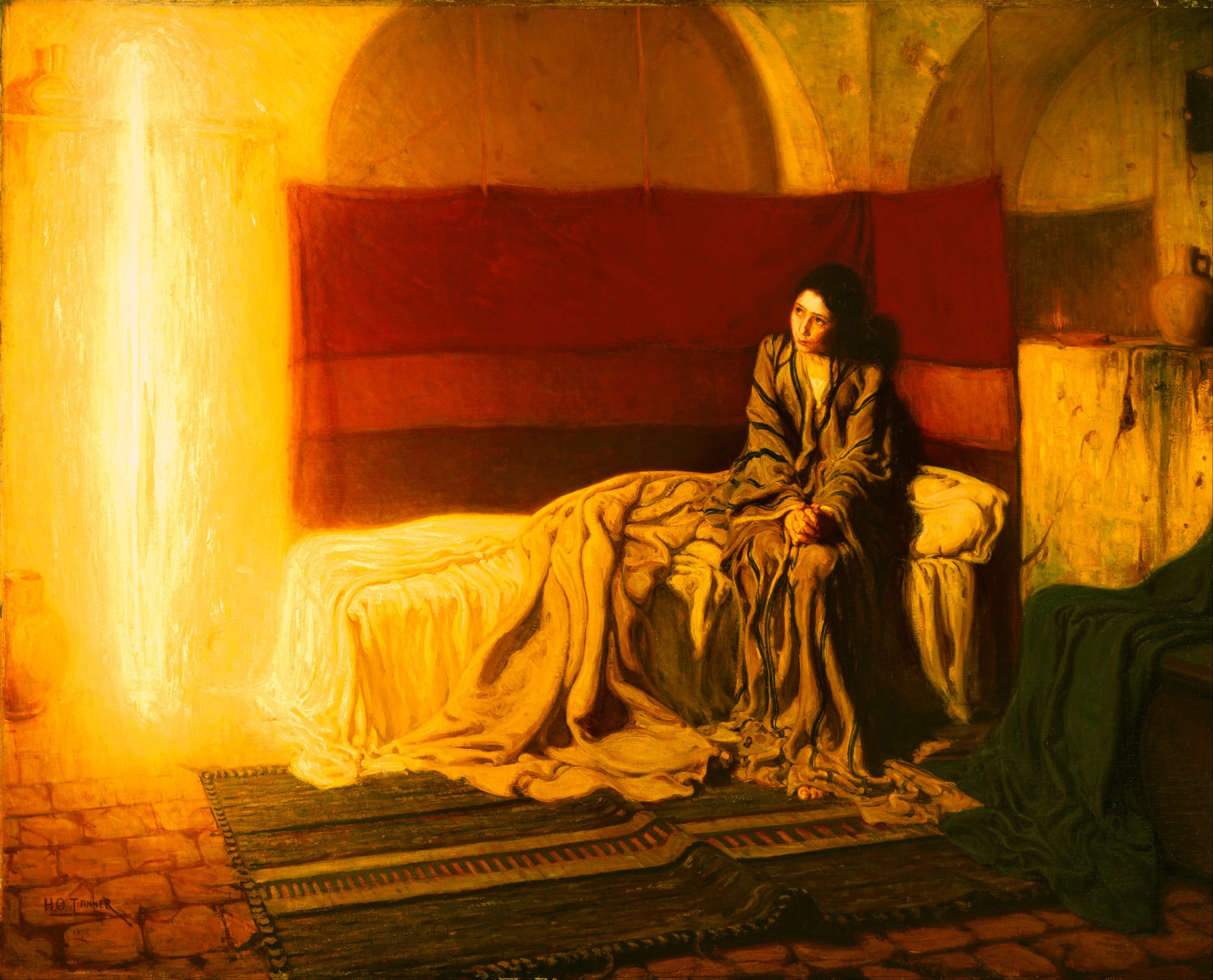 The central event asserted by Christians is the Incarnation. They say that God became Man. Every other miracle prepares for this, or exhibits this, or results from this. …If the thing happened, it was the central event in the history of the Earth – the very thing that the whole story has been about.

And this most consequential thing that ever happened in the history of the world “the very thing that the whole story has been about” happened … in a mother.

And it continued with a mother.

The First Disciple Was a Mother

When we think of the first disciples of Jesus, we properly think of 12 men that Jesus personally selected to be His students. But who was the first and most dedicated follower of Jesus? Who was the first person to proclaim “Yes, I will follow you wherever you lead in total obedience!”? We can read it in Luke 1:38, “I am the Lord’s servant. May it be to me as you have said.”

It was Jesus’ mother who said that. She was the first one to say “yes” to Jesus. And hers was, without parallel, the most consequential “yes” ever uttered at the call of the Savior.

And she was the first one to hear and glory in the proclamation of the good news of our Lord, as “Mary treasured up all these things, and pondered them in her heart.” This means the world-changing gospel first took root and grew deepest in a mother’s heart.

What earthly creature loved the Savior first, most purely and intensely? That would be a mother. There is no question about that. Do you imagine any later disciple’s love rivaled a mother’s love? And isn’t that the first call of Christian discipleship, to love Jesus without reserve and follow Him regardless? A mother was Jesus’s first and most intense, and passionate disciple.

And that mother started loving the Savior before anyone else, while He was yet hidden away in the dark, intimate recesses of her womanly womb. For a time, only her and God knew the most glorious of secrets. As a mother, she loved Jesus like no other human could and gave herself to Him in love and obedience like no other: body, mind, emotion and spirit.

A Mother Spent More Time with the Savior Than Anyone

Jesus certainly spent a great deal of very personal and intimate time with his twelve disciples. They witnessed so much of His life and how many of us would give anything to have been there amongst them for just ten minutes. They experienced not just his teaching and miracles, but hours upon hours of mundane times. They knew his laugh. His favorite foods. They heard his favorite jokes and greatest frustrations. They could easily pick out his sneeze in a crowd.

But each of these men came along quite late in His life, in the last few years only. It was a mother who was privileged to study more of the Savior’s life than any other person, and more intimately so. A mother could tell us more personal stories about Him than any of us could ever imagine. All of these she treasured and pondered in her heart as well! 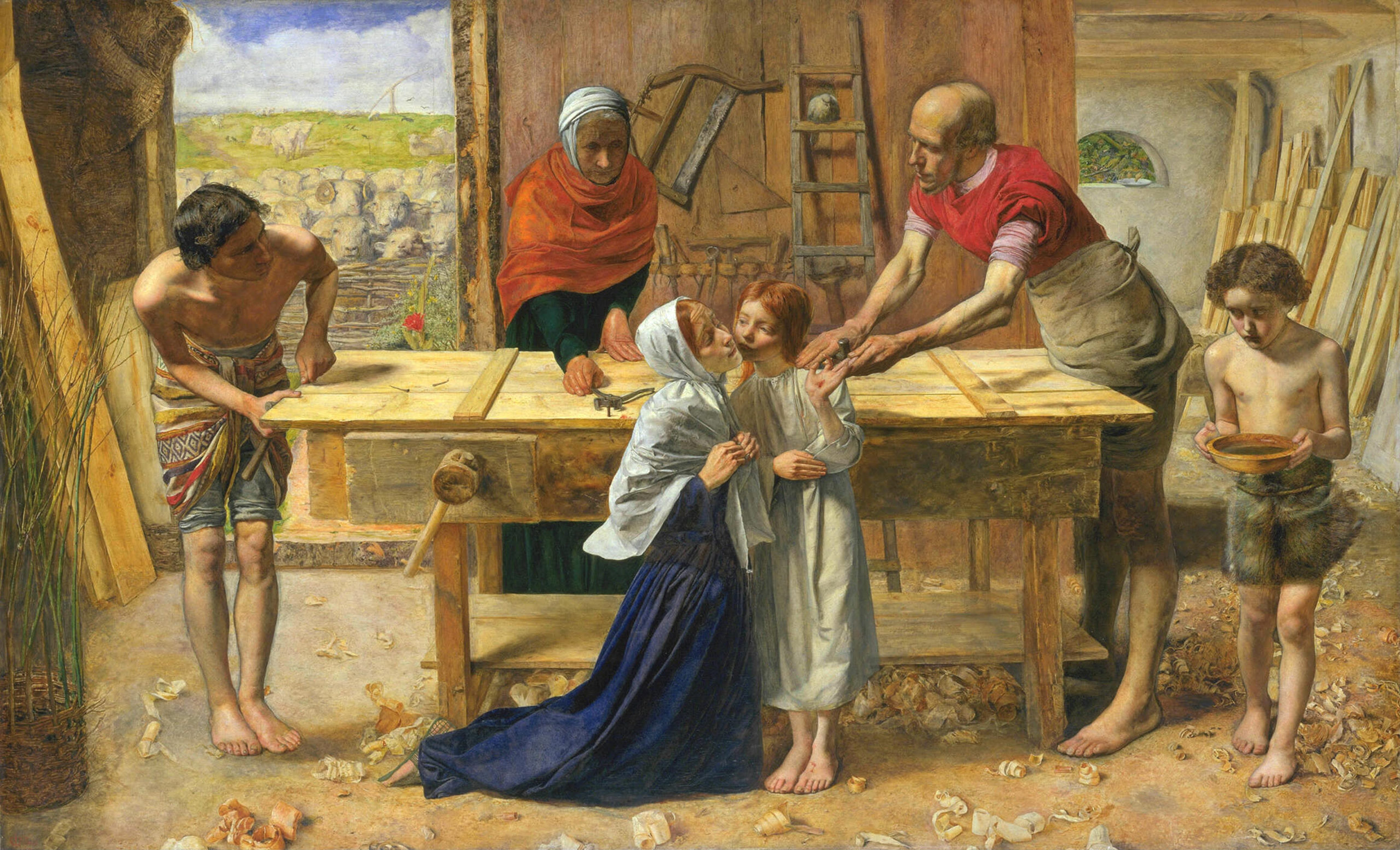 John Everett Millais, Christ in the House of Parents, 1850

A Mother Was at the Cross

Jesus’ mother was more than merely a divine conduit, a biological device by which God became human and entered the world. She was more than a wetnurse to make sure He received the care and sustenance He would need until He didn’t. She was not a bit player, a mere utility. She was the first and sole recipient of the announcement of His coming. He grew within her. He literally gained His flesh from her. She literally introduced him to the world through her labor. She cared for him, day in and day out for years. In the most intimate ways.

It was a mother who instigated the Savior’s first public miracle.

And it was a mother who was one of the few to remain with him until the end of his terrible, humiliating cross. Most of His other disciples had deserted Him by that time. But she was there, nearly alone.

Mathis Grunewald, The Crucifixion of Christ, 1524

A Mother on the Savior’s Mind at His Death

And even while the Savior was carrying the entire weight of the world’s sin in his brutalized, scandalized body, even while His own Father had forsaken Him for a time, the Lord’s mind was on caring for His mother. We read in John 19:26-29,

Christianity has a Lord who cared for His widowed mother, even in His time of greatest need, while He was dying a humiliating death for the sins of humanity. That is unspeakably profound, illuminating for us how much He loved His mother right up to His literal last breath. She was very much on his mind even then.

And she not only tragically caressed the broken body of our Savior, but she was the only disciple who simultaneously held and wept over the brutalized body of her little boy. A humble mother played an intensely dramatic role in the very beginning of our Savior’s life. And intimately so.

A mother cared for Him every day for the great majority of His precious life. More intimately than anyone else.

A mother was there at the very tragic end, caring for Him in the most intimate way.

Motherhood is not simply important to the Christian story. It is consequentially central. And that is why celebrating motherhood cannot simply be relegated to one day for the Christian.

Christianity has a powerfully unique story to tell about the profound honor and influence of being a mother. No other story comes anywhere close to rivaling it.