The U.S. Customs and Border Protection (CBP) released agency statistics on Monday, January 3 showing a massive increase in the amount of drugs seized at the southern border in 2021. The number of unaccompanied children (UC) encountered along the border also increased dramatically last year.

“The operational statistics for Fiscal Year 2021 show the breadth and scope of CBP’s mission, which encompasses travel and trade, drug interdiction, and border security,” said CBP Commissioner Chris Magnus. “These are not just numbers; they reflect the commitment of CBP’s workforce to their mission, to protecting the American people, and to fighting modern-day slavery.”

Late last year, The Daily Citizen reported on the ongoing drug epidemic in the United States. The Centers for Disease Control and Prevention (CDC) estimated that from May 2020 to April 2021, 100,306 Americans died from a drug overdose – an all-time high, and a tragic milestone.

The drugs, particularly fentanyl, that pour across the southern border from Mexico to the United States are a substantial factor in the overdose deaths.

According to the U.S. Drug Enforcement Agency (DEA), just two milligrams of fentanyl can be a lethal dose – meaning “one kilogram of fentanyl has the potential to kill 500,000 people.” 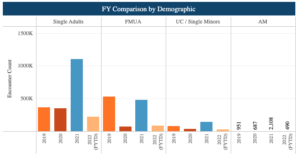 Children who make the perilously journey north without an adult are at great risk for serious harm and exploitation.

A 2017 article published in the Journal of Immigrant and Minority Health found that UCs journeying north “face the risks of exploitation, violence and death.”

“It is estimated that between 75–80% of newly arriving unaccompanied children are victims of human trafficking, as they travel into the U.S. with smugglers who then sell them into forced labor or prostitution,” the article states.

Also of note, the number of single adults encountered along the southern border increased drastically in FY 2021, when CBP encountered 1,105,925 single adults, compared to 368,812 in FY 2019.

The government employees, agents and officers who work for the CBP and DEA perform a heroic service to our nation – saving the lives both of immigrants and U.S. citizens.

The United States has had an unsecured, unserious, and porous Southern Border for decades. And despite politicians promising to fix it for years, the border remains open.