Is the 8 Billionth Child Being Born Worth Celebrating or Fearing? 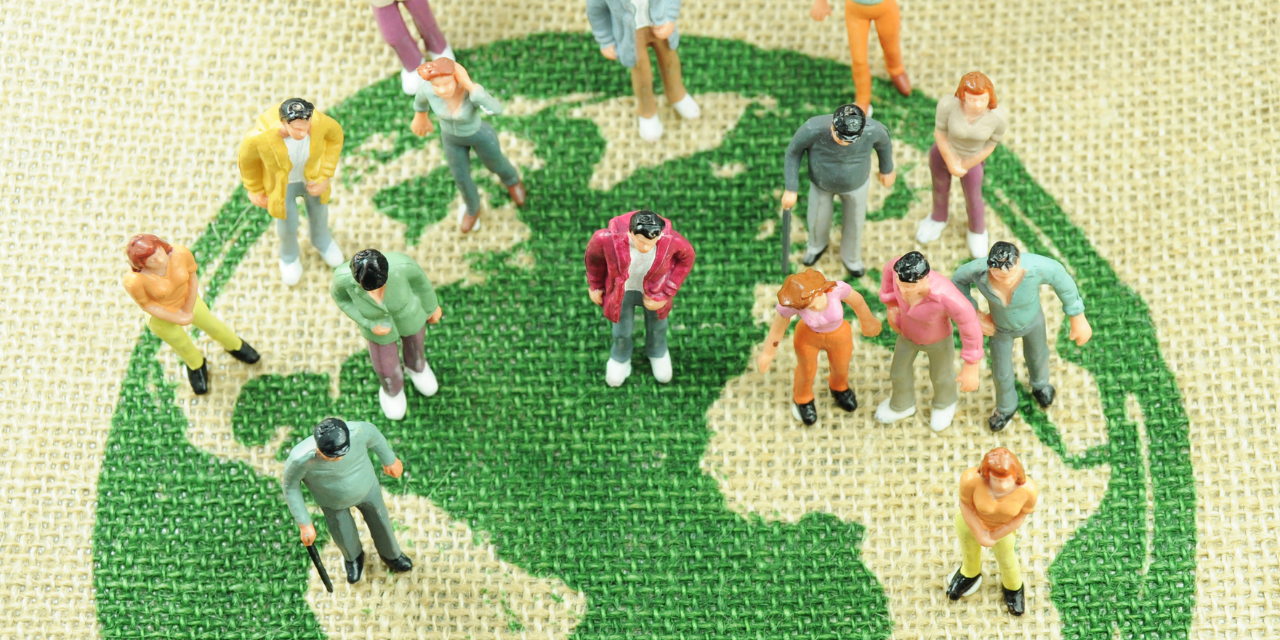 Demographers tell us the eight billionth brand new human being will be born in the middle of this month. November 15 to be exact. No one knows for sure where this new little boy or girl will be born, nor to what mother and father. But the experts who count such things tell us it will happen, and it is certainly something to celebrate.

A precious gift from God. But of course, not everyone feels that way.

Far too many people feel that having more babies is one of the most irresponsible, harmful things people can do. Environmental cataclysm and all that. There is even an active organization named “Stop Having Kids” because they feel that is the best thing anyone can do for our collective future. Certainly, these folks are smart enough to know there is no future without kids.

All Christians must ask whether God’s first command to “Be fruitful and multiply and fill the earth” is indeed wise and still in effect? Is the eight billionth human being born actually good news that each of us should celebrate?

It is extremely important that Christians and all those interested in what science actually says about the benefit of human reproduction know how to answer these questions. You will certainly be surprised by the answer.

Eight billion certainly seems like a great many people, until you consider how big the earth actually is. Then it doesn’t seem like that many at all.

Consider that all of us, and our eight billionth new friend, could easily fit in the state of Vermont with enough room to vigorously swing our arms around and not hit anyone. Feel like you need more room than that?

The humble state of Wyoming provides enough room for eight billion people to each have just over 12 square yards for themselves. Everyone could spread out, run around in circles and nary collide with anyone else, leaving the rest of the United States, not to mention the entire world, completely uninhabited.

So no, overpopulation is an absolute myth. Our earth is huge and people are relatively small. And there is plenty of space to produce the resources we need to live increasingly thriving lives, which is what we look at next.

We also throw away around 17 to 33 percent of all the food we produce globally. So production is certainly not a problem.

But the good news on human food supply is even stronger than mere production.

People all over the globe are experiencing consistently rising caloric intake across all income categories according to this data chart from the Our World in Data database, maintained by the Oxford Martin Programme on Global Development at the University of Oxford. 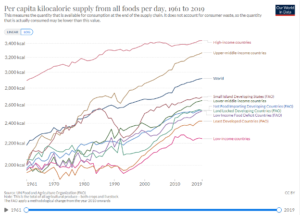 So, our ability to actually feed a growing population is improving dramatically. What is even more encouraging is that we are producing more food each year – both plant and animal – on increasingly less land per capita across the globe. Look at how dramatic this trendline is. This means the earth is actually working less hard to produce more food for a growing population, the exact opposite of the environmental doomsday narrative.

And while global hunger does unfortunately exist, this is certainly not a production/supply problem of an over-stressed, under-producing planet. The data tells a very different story. Hunger today is a political problem of distribution.

But people need more than food to survive. Clean water is essential.

And for all the environmental fear-talk that we hear, the share of our growing population around the world that has access to cleaner drinking water is expanding markedly, even in the poorest and driest parts of the world as demonstrated in this chart: 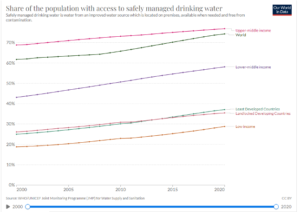 Sanitation, the ability to safely manage all forms of human waste, is also increasing sharply to unprecedented heights as populations grow larger. So no, growing populations are certainly not threatening food and water supplies. We are not living in greater unsanitary conditions because of too many people. Just the opposite. All of these are actually getting better as more people are born. And this is certainly not a coincidence.

Each of these are improving because of growing populations, not despite them. Human ingenuity and innovation is the reason for these improved metrics. This is explained in our next point.

As we can clearly see from the above data, and this is only a small fraction of this positive story, important measures of human survival are largely increasing as more people are born and grow into adulthood. This is because, on average, humans are more powerful producers and innovative problem solvers than they are consumers.

This was the fatal flaw with Paul Erhlich’s sensationally wrongly argued book The Population Bomb. First published in 1968, he argued that population growth was utterly unsustainable because humans were primarily consumers – stomachs to be filled, rather than minds and hands that innovate and produce.

Scientific developments in economics have proven Erhlich and his many disciples precisely wrong. And dramatically so.

Professor Paul Romer won the 2018 Nobel Prize in Economic Sciences for demonstrating that growing human populations actually improve human thriving. In his acceptance lecture to his fellow scholars, Romer explained that endogenous growth theory is the beautiful explanation of why, “on balance, it is better to have more people” because humans are more efficient and innovative producers than they are consumers. They solve more problems than they create because humans are creative.

You can listen to Professor Romer explain precisely why with riveting real-life examples in his succinct Nobel lecture.

Therefore, the best science tells us limiting our population is not a progressive ideal. Literally. The most sophisticated, cross-disciplinary science coming to press in academia right now, whether it realizes it or not, tells us that God’s first command was not only wise then, but remains essential for human thriving as our population continues to grow.

God knows what He’s talking about. “Go forth and multiply” is the way to a better future and the eight billionth child being born this month is indeed a gift from God to be widely celebrated. There is no telling what serious problem that new little boy or girl might solve for humanity in the coming decades.