The New Zealand Olympic Committee (NZOC) announced that 43-year-old weightlifter Laurel Hubbard will be the first biological male to compete in a women’s event at the Olympic Games. Hubbard is, so far, the only athlete who was born male to compete among the more than 5,000 biological females at the Summer Games.

The transgender-identified athlete is one of five individuals who will make up the country’s weightlifting team at the 2020 Summer Olympics, scheduled to be held July 23 – August 8, 2021, in Tokyo, Japan., the NZOC said. Hubbard will compete in the women’s super-heavyweight category, for women over 87 kg. (191.8 lbs.), in the clean and jerk and the snatch.

“I am grateful and humbled by the kindness and support that has been given to me by so many New Zealanders,” Hubbard said in a statement from the NZOC, adding, “When I broke my arm at the Commonwealth Games three years ago, I was advised that my sporting career had likely reached its end. But your support, your encouragement, and your aroha carried me through the darkness.”

But Hubbard isn’t receiving love from everybody over his competing as a female. As we previously reported at The Daily Citizen, super-heavyweight lifter Anna Vanbellinghen of Belgium spoke out against allowing Hubbard to compete.

She said, “Anyone that has trained weightlifting at a high level knows this to be true in their bones: This particular situation is unfair to the sport and to the athletes.”

Katherine Deves is a lawyer, a mom, and co-founder of Save Women’s Sport Australasia (SOSA). The organization’s “mission to preserve biology-based eligibility standards for participation in female sports.” She also knows that men who compete as women have an unfair advantage and take opportunities from women.

Shortly after Hubbard’s inclusion on the women’s team was confirmed, she tweeted, “The inclusion of a middle-aged biological male in the IOC female weightlifting category on nothing more than a declaration and an artificial reduction of testosterone is an affront and an insult to women and girls. Women are not a hormone level.”

SOSA itself posted on its Facebook page, “No shock here, but incredibly disappointing nonetheless that thanks to a flawed transgender eligibility policy developed by the Olympics, and followed by many other sporting federations, a 43-year-old biological male has taken an Olympic opportunity off a female athlete in her prime.”

Kudos to these brave individuals and organizations fighting for women’s opportunities and for the truth that women and men are biologically different. Drugs, hormones, surgeries, clothing and makeup don’t alter those fundamental distinctions.

The International Olympic Committee (IOC) adopted guidelines in 2015, paving the way for men who believe they are female to compete at the 2020 Olympics in women’s sports. The IOC said it will revisit those guidelines – but only after this year’s Tokyo Games.

SOSA posts a question on its website, “Does what you see below make biological men competing against biological women seem fair to you?” Beneath that is an infographic, which shows that men who have gone through puberty – like Hubbard – have a distinct athletic advantage over women in most sports. Testosterone suppression and female hormones do not erase that advantage. 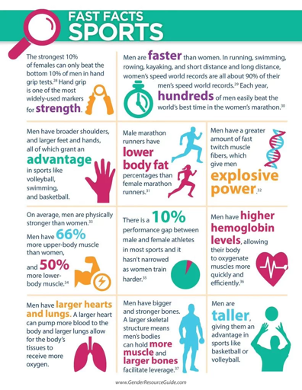 This information – and more – can be found in “Parent Resource Guide: Responding to the Transgender Issue.” The free, 66-page downloadable resource helps parents understand transgenderism and how it affects children, as well as explaining transgender activism in public schools and how parents can speak the truth about this issue within their communities.