Just 18% of American Households Are Families with Married Parents For decades, research has proved what experience shows; children do best when raised by a married mom and dad.

And yet, according to a new data released by the U.S. Census Bureau, less than 18% of American households are families with married parents and children.

In raw numbers, there are 23.1 million American homes with nuclear families (married couples with children) out of 130 million households. This number “is the fewest since 1959.”

The 23 million number equals 17.8% of U.S. households consisting of a traditional, nuclear family. This is down from 18.6% in 2020, and down even more drastically compared to previous decades.

In 1970, 40% of U.S. households consisted of a married mother and father with children. Now, that number has been more than halved.

Accounting for the decline between 2020 and 2021, “The reasons given for the drop include the pandemic delaying marriage and a continued decline in birth rate.” 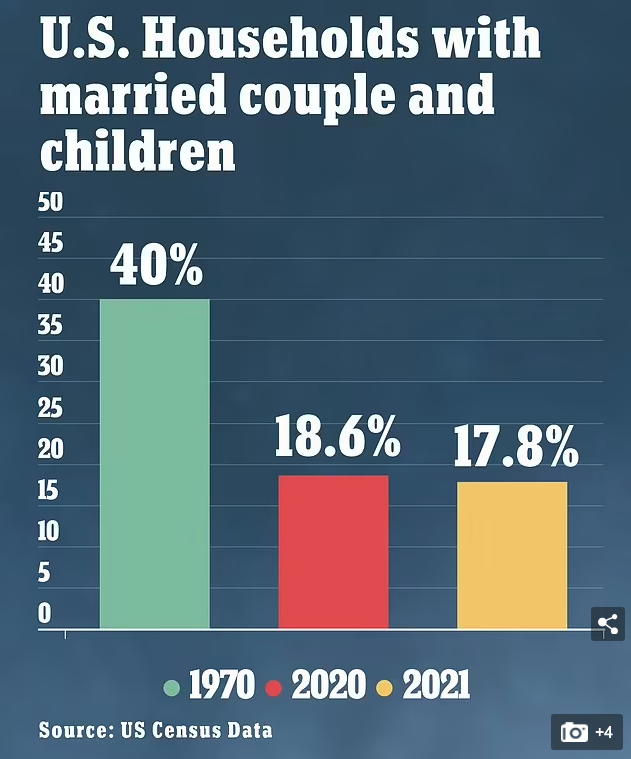 The Census Bureau also released several other data points that are important to note.

An additional concerning trend regarding U.S. demographics is the continuing decline in the fertility rate.

According to the U.S. Centers for Disease Control and Prevention (CDC), the U.S. fertility rate decreased 4% from 2019 to 2020, reaching 1.64 births per woman – which is “the lowest rate on record.”

The “replacement rate,” the average number of children each woman needs to have for each generation to replace itself, is 2.1 births per woman.

A May 2021 article from the center-left Brookings Institute addresses whether birth in the U.S. could rebound in the future.

Their answer: “Probably not.”

After creating the world, the first command God gives mankind is to “be fruitful and multiply.” But it seems, just like mankind’s frequent breaking of the Ten Commandments, we’ve slowly forgetting God’s first command.

For those children who are born, it’s clear that they do best when raised by a married mom and dad.

The Institute for Family Studies (IFS) reports about how important marriage is for children.

“Parents who are able to get and stay married are more likely to have children who flourish in life, and who avoid the detours that can derail their futures, compared to children raised in other types of families,” IFS writes.

“The social science is clear: children who are raised by their own married parents are more likely to thrive. That’s because they tend to enjoy more stability, more money, more consistent discipline, and more attention than their peers in other families.”