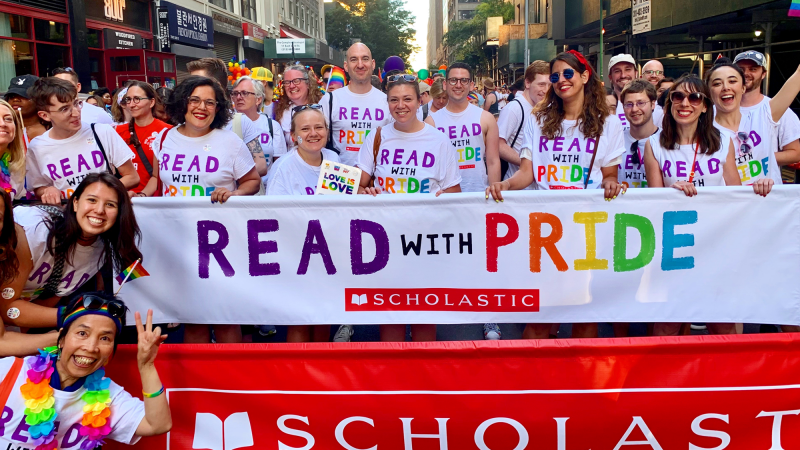 Heroes of Liberty and No Left Turn in Education have launched a campaign alerting parents about Scholastic Corporation, and its promotion of homosexuality, transgenderism, anti-Americanism and critical race theory to school children.

The company reaches millions of children every year through book fairs, online book sales, reading clubs and the donation of materials to schools. It is the largest publisher and purveyor of children’s books for pre-K to 12th graders in the world.

No Left Turn in Education is an organization that works, among other goals and objectives, to restore parental involvement in education, expose radical indoctrination in schools, and support teachers who oppose the politicization and sexualization of school children.

You may think that your children are safe from woke indoctrination at home, but they’re almost certainly not. Scholastic, a billion-dollar children’s book juggernaut, turned into the most dangerous in youth culture. We call it the Woketopus.

The campaign website, Stop Woke Books, has a video accusing Scholastic of promoting gender fluidity, homosexuality, CRT and anti-Americanism in books for students of all ages.

The video portrays Scholastic as a “Woketopus” with undulating tentacles insinuating their way into schools and homes. It says the company has abandoned “basic American values of freedom, family, self-reliance, and love of country” and uses “the authority of teachers to actively promote their books to children.”

The video shows books published and offered by the corporation, such as Heartstopper, an “LGBTQ+ graphic novel” series by Alice Oseman. Volume 3 is described this way, “Charlie didn’t think Nick could ever like him back, but now they’re officially boyfriends. Nick’s even found the courage to come out to his mum.” The book is recommended for readers in 7th through 12th grade.

Then there’s the book George, by Alex Gino, who “is genderqueer and uses singular they pronouns and the honorific Mx.” Gino’s website states,

Alex has been an activist and advocate for LGBTQIAP+ communities since 1997 … They [sic] are proud to have served on the board of NOLOSE, a fat-positive, queer, feminist organization dedicated to supporting radical fat acceptance and culture (emphasis in the original).

George, recommended for 3rd through 7th graders, is described on the Scholastic website, “When people look at George, they think they see a boy. But she knows she’s not a boy. She knows she’s a girl.” George eventually “transitions” into a “girl” named Melissa.

Scholastic books that promote concepts from critical race theory include The Other Talk: Reckoning with Our White Privilege, by Brendan Kiely, and Stamped: Racism, Antiracism, and You, an adaptation for 12 to 18 year olds of activist Ibram X. Kendi’s book Stamped from the Beginning.

Books like these are rooted in a Marxist ideology that separates all of society into “oppressors” and “oppressed,” based on identity politics. With CRT all whites are “privileged,” but white, Christian, English-speaking males are especially advantaged.

They teach that racism is systemic and structural and must be combated by “anti-racism” – treating people differently based on their race and other “intersectional” traits, so that “equity” is achieved.

This is just a small sampling, as Scholastic has dozens of other books that encourage homosexuality and transgenderism and critical race theory.

Elena Fishbein, founder of No Left Turn, told Fox Business that her organization joined the campaign because Scholastic has been “a consistent and growing concern” and has become more politicized.

The thousands and thousands of parents involved with us, they are searching for alternative books. If you go to school libraries or public libraries, your head spins around when you see the books that they’re using on racial issues, sexualizing kids, police hate. All those woke books, what I call poison, the amount makes you sick.

“Book Fairs put more than 100 million books in the hands of kids every year, while helping schools raise over $200 million in free books and resources (their emphasis),” explains the company, which had $1.46 billion in revenue in the past 12 months.

Fishbein said, “It’s in 90% of the schools. This is a monopoly. I don’t know of any other publication with this footprint in the school.”