First Amendment free speech cases that reach the U.S. Supreme Court are never about inoffensive words, it seems. While individuals, businesses or organizations may try to shut down speech that offends them, the legal situation changes drastically when the government attempts to do so, and we should appreciate it when the courts step in and remind us what the First Amendment is designed for.

This week the Supreme Court decided an important free speech case involving a public high school cheerleader in Mahanoy City, Pennsylvania. The facts in this case – like other free speech cases involving students – don’t paint the cheerleader in a sympathetic light. B. L., as the court’s opinion designates her because she is a minor, tried out for a varsity cheerleading position as well as a spot on her school’s softball team. When she only made the junior varsity squad and was also equally disappointed in her lack of success in her softball tryout, she vented on social media.

Her Snapchat post, using quite vulgar language, criticized her school, cheerleading and softball. She was off campus at the time she posted it, and it was after school hours. Social media being what it is, her message made it around the school in a hurry and into the hands of the cheerleading coach, who promptly suspended B. L.’s participation in cheerleading for one year. Her parents sued on her behalf to reverse her punishment, and two lower courts, as well as the Supreme Court, agreed with her.

(I should interject a reminder here that the First Amendment applies here because a “public school” is a government entity. Private schools are a different matter.)

I’m sympathetic to the school’s action here, but only to a point. As unpleasant as First Amendment free speech cases can be, they secure key protections for all of us. The majority opinion in this 8-1 decision (Justice Clarence Thomas was the lone dissenter), was written by Justice Stephen Breyer, and he points to the larger picture.

“It might be tempting to dismiss B. L.’s words as unworthy of the robust First Amendment protections discussed herein,” Breyer wrote. “But sometimes it is necessary to protect the superfluous in order to preserve the necessary.”

Breyer’s opinion also explained the duty of schools to cultivate and protect unpopular expression, since “America’s public schools are the nurseries of democracy.” While schools may restrict on-campus speech in certain circumstances, including where the speech disrupts the educational process, he warned that the school’s rights don’t always extend to off-campus speech.

“That means courts must be more skeptical of a school’s efforts to regulate off-campus speech, for doing so may mean the student cannot engage in that kind of speech at all. When it comes to political or religious speech that occurs outside school or a school program or activity, the school will have a heavy burden to justify intervention,” he wrote.

Note the phrase “political or religious speech” in Breyer’s opinion. Here’s why this decision is so important to conservatives, and especially Christians. Today the case is about some vulgar speech concerning cheerleading. But tomorrow’s situation might involve your teenagers speaking up against Marxist ideology creeping into their schools, defending a biblical standard for marriage or sexuality, or discussing religion during their free time. Any of these, today, could trigger retribution by teachers or administration officials.

One religious liberty heavyweight in legal matters is the Becket Fund for Religious Liberty. Becket has represented any number of parties appearing at the Supreme Court, including the group of nuns of Little Sisters of the Poor fame. Becket tweeted its observations on the connection between the cheerleader case and religious freedom.

“We are glad #SCOTUS upheld this student’s right to free speech. Allowing public schools to silence any speech it deems divisive is extremely dangerous – especially when it comes to deeply held religious beliefs.”

“In fact, all 9 Justices agreed that off-campus religious speech gets special protection. An important reminder that government shouldn’t control everything, but it definitely shouldn’t control how people talk about God.” 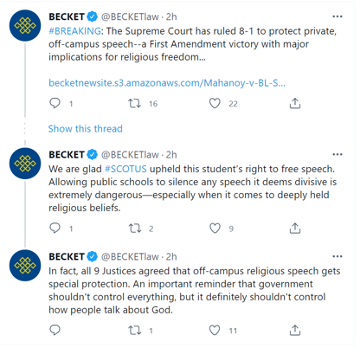 In his concurring opinion, Justice Samuel Alito also drove home the point that schools need to be very careful about attempting to control or punish off-campus speech.

“At the other end of the spectrum, there is a category of speech that is almost always beyond the regulatory authority of a public school,” Alito wrote. “This is student speech that is not expressly and specifically directed at the school, school administrators, teachers, or fellow students and that addresses matters of public concern, including sensitive subjects like politics, religion, and social relations. Speech on such matters lies at the heart of the First Amendment’s protection.

“It is unreasonable to infer that parents who send a child to a public school thereby authorize the school to take away such a critical right.”

As parents, we might be horrified at the language this cheerleader used, and rightly so. And perhaps her parents levied a punishment of their own on their daughter in this case, before bringing this lawsuit on her behalf. We don’t know.

What we do know is that this case provided a vehicle for the Supreme Court to further refine and restrict the government’s right to restrict speech. And that’s always a good thing.