The 1921 Massacre on Black Wall Street in Tulsa Oklahoma For Black History Month, The Daily Citizen will be featuring a weekly story featuring important takes on Black American history relative to politics and community life. Next week, we will feature the important, but little appreciated Black intellectual, Dr. Thomas Sowell.

If you were asked whether it is a part of American history that citizens of a mid-Western town took to the air with scores of airplanes to intentionally fire-bomb the homes and businesses of their fellow citizens, leveling a whole neighborhood and killing hundreds, would you believe that ever happened? Its sounds like a very odd question. Of course, such an atrocity could never happen in America. But remarkably it did, and dramatically so. In Tulsa, Oklahoma in 1921.

On last Friday’s Focus on the Family broadcast, Oklahoma Senator James Lankford made reference to this historic incident, known as the horrific 1921 Tulsa Race Massacre. It was one of the largest and most violent attacks on African-American citizens in our nation’s history, a little known part of American Black History. In fact, this year marks the massacre’s centennial and all Americans should know about it.

It is the story of Greenwood, a neighborhood in Tulsa Oklahoma which blossomed into a Black entrepreneurial wonder in the first two decades of the 1900s. In fact, Booker T. Washington called it “Negro Wall Street” because of its Black-owned strength, influence, and business success. Some Whites derisively called it “Little Africa.” But there is nearly no trace of that place today. It was completely decimated, fire-bombed to rubble on June 1, 1921 in what one historian called “by far, the largest single incident of racial violence in all of American history.” And relatively few people know of it.

Greenwood grew to a 35 block community in Tulsa that was thriving with Black-owned businesses, theatres, hotels, hospitals, law offices, a thriving prospering cultural and business center in the growing American West. But it was burned in one day, literally to the ground. The treachery left an estimated 300 Black Tulsans dead and buried in mass graves, another 10,000 destitute and homeless, with 1,200 private homes raided, looted and burned, resulting in 6,000 Black men in internment camps unable to assist their wives and children in the recovery. 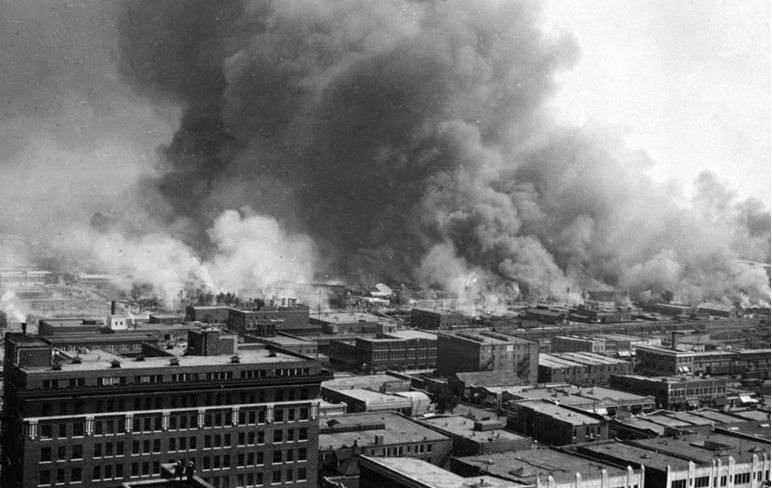 There was tremendous unrest in Tulsa during this time because Black citizens in the Greenwood district were doing so well. Many White citizens saw these Black families as “uppity” and rising above their station, sparking great jealousy and vicious anger.

What sparked this powder keg was a small newspaper story (seen here) accusing a young black shoeshine man of attacking a white teenage girl while she worked as an elevator operator. It was an improbable accusation, but rumors that the young man was to be lynched spread through town within hours. Both sides of the racial divide were heavily armed.

Into the night, blocks of Black-owned homes and businesses were soon entered, looted and set on fire by Whites with the assistance of city officials. Airplanes dropped flaming turpentine balls on buildings, igniting them instantly. The result was mere rubble, a smoking, smoldering war zone.  Black citizens were dragged by cars, shot, burned, and dismembered and decapitated. Machine guns opened fire on citizens in the streets. Pictures of the gruesome scene were made into postcards for purchase.

No one was arrested or tried in the massacre and not one cent of insurance claims were paid to the Black victims. Most Black Oklahomans began to learn about the tragedy only in the last few decades as the terrible incident was scrubbed from local history for decades by Whites too ashamed to speak of it and Blacks too stunned to tell their children of the horror.

This crime was as large as it is unknown. But it happened, revealing the deep depravity of the human heart and terrible ability to mistrust and hate those who are different than ourselves. May such an evil thing never happen again amongst citizens of the same town, anywhere.

You can learn more about this remarkable travesty from the following sources: