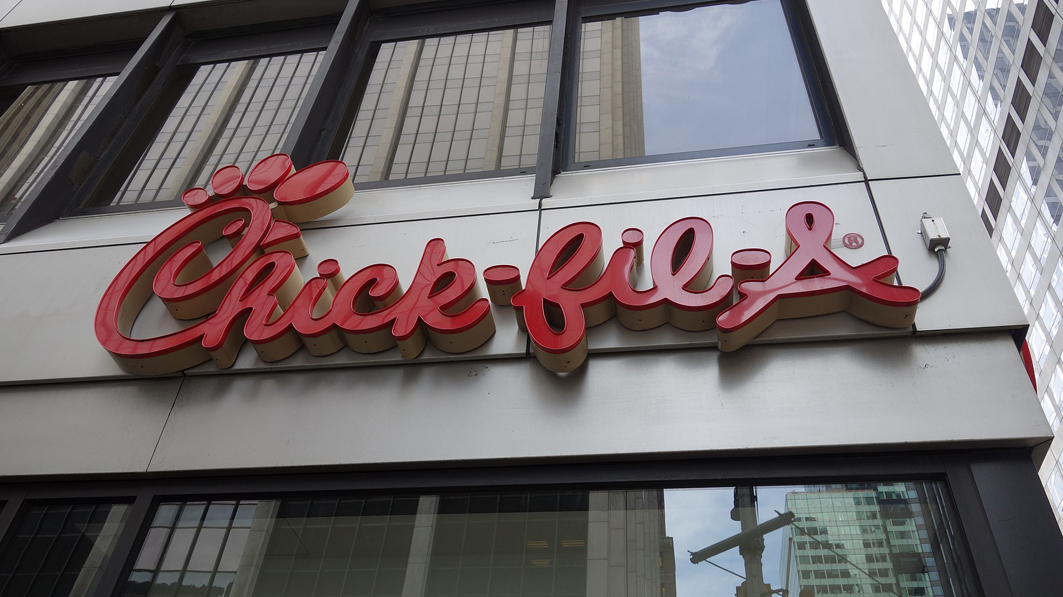 Chick-fil-A is once again under the gun from LGBTQ activist groups and their allies. San Jose is the latest city to go after the nation’s favorite fast food chain because of the company’s Christian values. The city had approved a contract and announced the addition of a Chick-fil-A at the Mineta San Jose International Airport last year, but activists somehow missed that announcement. When they learned the restaurant was scheduled to open next month, they sprang into action.

A group from the Bay Area Municipal Elections Committee (BAYMEC), a “lesbian, gay, bisexual and transgender (LGBT) political action committee,” first held a rally at San Jose City Hall, denouncing Chick-fil-A’s inclusion in the airport. “This is public space. We know that this is a strong and inclusive community. We need to make sure that businesses there respect these values,” said BAYMEC’s president, Paul Escobar, apparently without a hint of understanding what “inclusive” means. The group then went inside to meet with the City Council.

The council voted to hang rainbow gay pride flags and blue, white and pink transgender pride flags in the airport near the restaurant. One council member said that he wants the flags and the hiring of LGBT-identified employees to signal that the airport restaurant is the “gayest Chick-fil-A in the country.”

While the council wanted to remove the restaurant completely, a city attorney advised them that they should not ban the restaurant simply because they disagreed with its values. So the city council took another tack and voted to deny contract extensions to airport restaurants that were not open seven days a week. Chick-fil-A, famously, closes on Sundays so employees are able to “set aside one day to rest and worship if they choose.” The restaurant will only remain in the airport until its current contract expires in 2026.

San Jose is the third city in recent months to block travelers from grabbing waffle fries and chicken sandwiches at the local airport. San Antonio led the way, with the city council voting to exclude the restaurant from its airport, in the name of “equality and inclusion.” “Everyone has a place here, and everyone should feel welcome when they walk through our airport,” said Councilman Roberto Trevino. Everyone, of course, except Chick-fil-A and its customers. The good news is that Texas’ Attorney General is now investigating the city for violating the First Amendment’s religious freedom clause.

Buffalo followed quickly on the heels of San Antonio, first approving the restaurant, then rescinding the agreement after a state assembly member raised the alarm. Chick-fil-A responded with this statement:

Recent coverage about Chick-fil-A continues to drive an inaccurate narrative about our brand. We do not have a political or social agenda or discriminate against any group. More than 145,000 people from different backgrounds and beliefs represent the Chick-fil-A brand. We embrace all people, regardless of religion, race, gender, ethnicity, sexual orientation or gender identity.

Activists first targeted Chick-fil-A back in 2011, when they discovered that a Pennsylvania franchise was donating food to participants in a marriage conference presented by Family Life, a Cru ministry (formerly Campus Crusade for Christ). The event was sponsored by the Pennsylvania Family Institute, a Family Policy Council affiliated with Focus on the Family.

A few months later, the LGBT group Equality Matters published an investigative report that revealed the “depth of Chick-fil-A’s ties to anti-gay causes.” Equality Matters is an offshoot of Media Matters for America (MMFA), a liberal activist group that has received heavy funding from George Soros.

Equality Matters discovered that the Winshape Foundation, a charitable organization begun by Chick-fil-A’s founder, Truett Cathy, ran youth camps and marriage retreats. But to the horror of Equality Matters, Winshape also gave money to groups like the Fellowship of Christian Athletes; the Christian Camp and Conference Association; and the National Christian Foundation. The latter group, they wrote, “is a grant-making foundation that has made ‘hundreds of grants’ to anti-gay groups like Focus on the Family, Family Life, and the Family Research Council.”

Equality Matters reported that the Winshape Foundation worked to promote and support “traditional marriage,” i.e., what marriage has always been, the union of a husband and wife. Equality Matters also revealed the shocking fact that Chick-fil-A partnered with Focus on the Family for two months in 2005 to give away free “Adventures in Odyssey” CDs with every Chick-fil-A Kid’s Meal.

Chick-fil-A president Dan Cathy added fuel to the fire in 2012 when he did an interview where he opposed the redefinition of marriage. Cathy said, “I think we are inviting God’s judgment on our nation when we shake our fist at Him and say, ‘We know better than you as to what constitutes a marriage.’ I pray God’s mercy on our generation that has such a prideful, arrogant attitude to think that we have the audacity to define what marriage is about.”

He went on to express the commitment of Chick-fil-A leadership to strengthening marriages and families, “We are very much supportive of the family – the biblical definition of the family unit. We are a family-owned business, a family-led business, and we are married to our first wives. We give God thanks for that … We want to do anything we possibly can to strengthen families. We are very much committed to that.” Activists castigated Cathy for espousing Jesus’ view of marriage, and this led to liberal students and politicians working to exclude the restaurant from campuses and cities. Despite the attacks and calls for boycotts, the company flourished.

So what’s driving the most recent Chick-fil-A fracas? The latest outrage stems from a Think Progress story showing that, in 2017, the Chick-fil-A Foundation donated more than $1.8 million to the Fellowship of Christian Athletes, the Paul Anderson Youth Home, and the Salvation Army. The foundation gives millions to more than just these three groups, but they were targeted by Think Progress because of their biblical views on sexuality.

The largest gift was to the Fellowship of Christian Athletes (FCA), which received a little over $1.6 million. Think Progress aroused activists’ ire by reporting that the organization holds to a biblical view of marriage and requires employees to adhere to a strict “sexual purity” policy that forbids “homosexual acts.”  The money donated to FCA is used primarily for summer sports camps.

The Salvation Army is first of all a church, with 1.7 million members world-wide, started over 150 years ago by William and Catherine Booth. But it’s also a charitable organization, with the group’s website listing a variety of ministries, including: providing relief after natural disasters; offering shelter and meals for the impoverished; helping those affected by drug and alcohol addiction; and providing safety and homes for victims of domestic violence. The money Chick-fil-A has given to The Salvation Army over the years is used for children’s programs.

The Paul Anderson Youth Home is a Christian ministry for young men, 90% of whom are dealing with substance abuse issues. Olympic gold medal winning weightlifter Paul Anderson was working to start the ministry in 1961 when he met Truett Cathy, who became the home’s first donor.

Each organization is doing ministry, often to “the least of these,” while maintaining a Christian view of sexuality and marriage. But media groups like Think Progress – and the politicians and activists that oppose Chick‑fil‑A’s generosity – seem to care more for a strict adherence to LGBT ideology than for helping those in need.