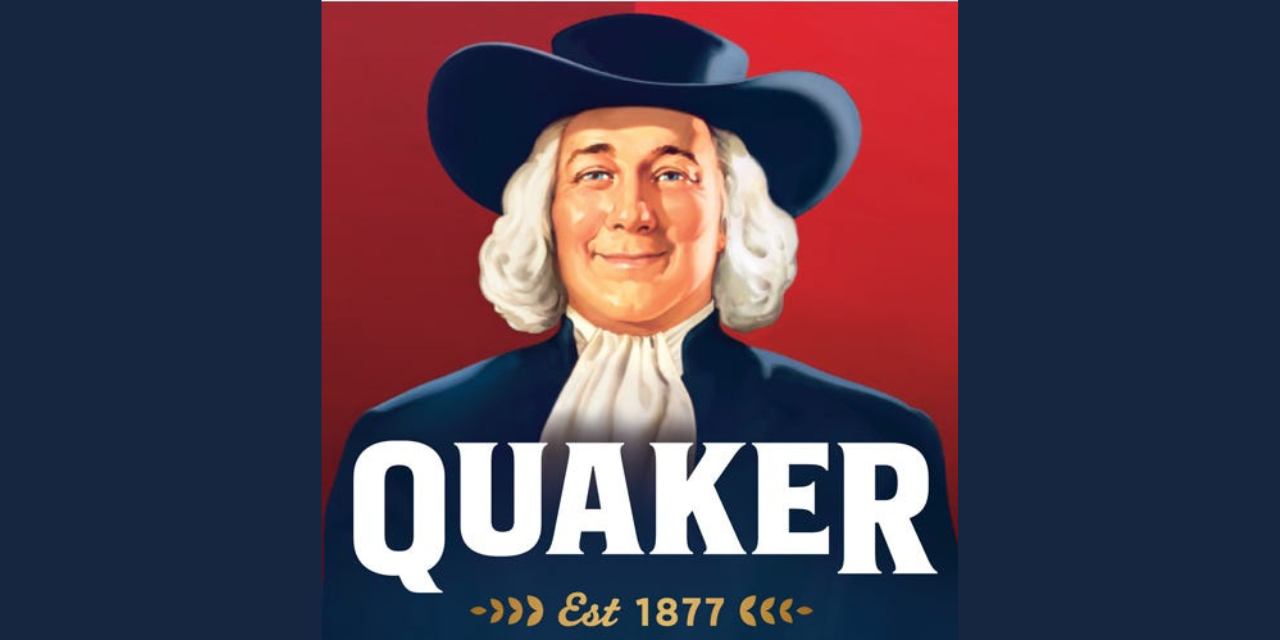 If this year follows the same trajectory as the last, as well as all the years since 1877, sales of Quaker Oats will go up as the temperatures go down.

From their oats facility inside the factory at 418 2nd Street, NE in Cedar Rapids, Iowa, the Quaker Oats Company produces over 2 million pounds of oats each day. Now owned by PepsiCo, the mill is the largest of its kind in the world. The manufacturing process is layered and complex, and involves cleaning, dehulling, kilning, cutting and flaking the oats.

Of all the food packages in your kitchen pantry, there’s a good chance your Quaker Oats cannister is the one that’s changed the least from your childhood. With its familiar dark blue and orange/red colors, accentuated by the “Quaker Man” in the white circle, the distinctive look is something of nostalgic comfort food for many. New versions of the same product have emerged over the last few decades, from individual servings to a wide variety of flavors and different cuts of oats. But through it all, the smiling man in Quaker garb remains a fixture.

Quaker Oats traces the rise of oatmeal back to the 1850s when two competing mills in Iowa and Ohio began processing oats. Seeing an opportunity, two men – Henry Seymour and William Heston – decided to launch their own company. But what to call it?

According to the story, Henry Seymour happened to be reading an article about the Quakers, a Protestant sect dating back to 17th century England. Quaker missionaries first arrived in America in the 1650s. Known officially as the “Religious Society of Friends,” Seymour was impressed with the denomination’s upstanding reputation. The article described Quaker members as being honest, strong, pure and living with a high sense of integrity.

At the time, many food manufacturers in America were known to swindle customers. Products were watered down or regularly made with inferior ingredients – but then passed off as being better than they really were.

So, Seymour and Heston decided to name their oats mill after the Quakers, believing the name and association would engender great trust and result in higher sales.

Over the years, many have assumed the “Quaker Man” logo was modeled after William Penn, the Quaker writer and thinker best known for founding the colony of Pennsylvania in 1682. But company officials have insisted the image was a composite of all Quaker men.

Partly because oats were largely considered horse food, Seymour and Heston initially struggled financially with the Quaker Mill. Just four years later, they decided to sell to Henry Parsons Crowell, a devout Christian man. He prayed fervently about how to turn around the struggling business and felt he heard the Lord tell him to approach other mills and invite them to join forces. In the end, twenty agreed – and the “Oatmeal Millers Association,” later the “American Cereal Company,” was formed.

Henry Crowell would go on to help popularize oatmeal, advertising his company’s product on the sides of trains and on billboards with the phrase, “Quaker Oats, the World’s Breakfast.” With his rising wealth, Crowell began funding over 100 Christian causes, including the Moody Bible Institute. He was also an enthusiastic evangelist and enjoyed leading many corporate executives he crossed paths with to a saving relationship with Jesus Christ.

It’s difficult to imagine an American corporation today wanting to leverage the good name and reputation of a Christian denomination like Seymour and Heston did back in 1877. Some might suggest that’s because too many churches and Christians haven’t lived up to the ideals of the faith, and unfortunately, there would be some truth to such a charge. But in this post – and all too often anti-Christian culture, it’s often the companies and executives themselves who are uncomfortable being associated with the spiritual and moral absolutes of people who strive to live like Christ.

That’s because being a Christian won’t win you popularity contests in a pagan world. We believe in the inspired, inerrant, and infallible Word of God. We believe in moral absolutes – abortion is wrong, marriage is a sacred union between one man and one woman, and there are only two sexes, male and female.

But the next time you make yourself a bowl of oatmeal, remember that once upon a time in America, Henry Seymour, William Heston and Henry Crowell believed Christian values and goodwill were so good for business that they wanted to associate their company with faith in Christ.