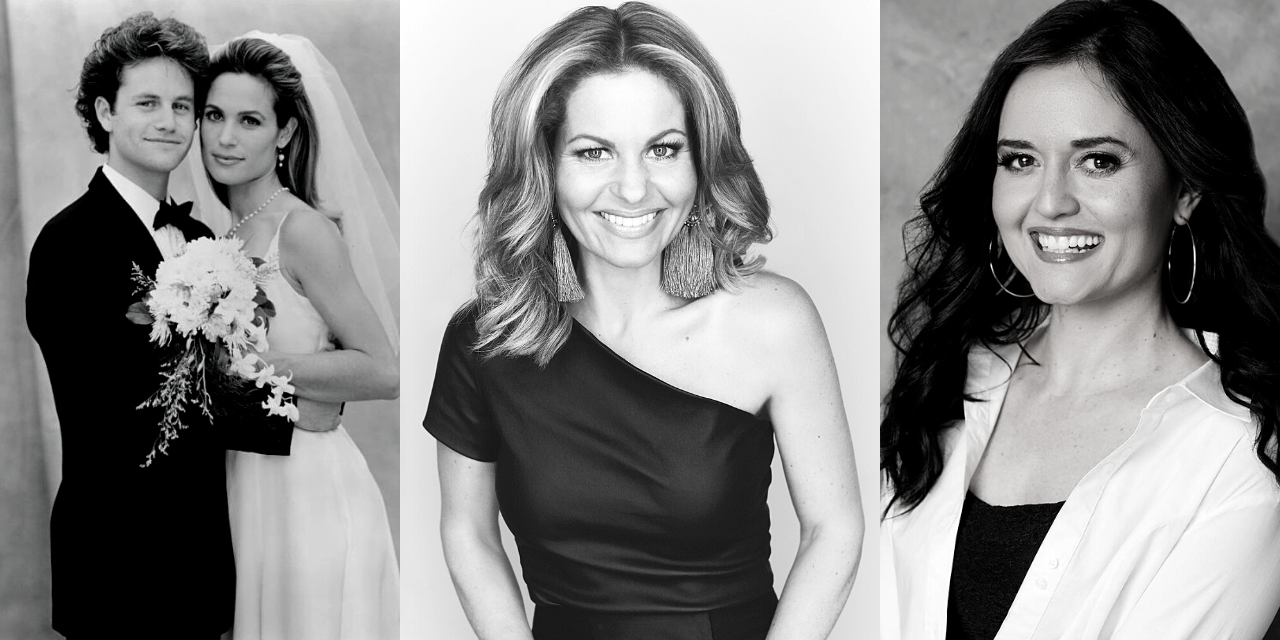 The late Apple founder Steve Jobs famously said, “You can’t connect the dots looking forward. You can only connect them looking backward.”

So, let’s look back and connect some dots that illustrate God’s sovereign hand in connecting, converting, and celebrating the lives of a Christian Hollywood triumvirate now forever linked by the gift of adoption:

Another way of putting it is that this story involves the popular sitcoms Growing Pains, Full House and the Wonder Years.

The story starts back in the early 1960s with two adoptions in Cheektowaga, New York, a suburb of Buffalo. It’s a solidly blue-collar town, once the home of a large Westinghouse Electric factory.

Fred and Irene Mueller are eager to start a family, and are delighted to adopt a son, David, and daughter, Nancy. The children are not biologically related. But both become the beneficiaries of a loving, stable Christian home. Fred and Irene would be happily married for 36 years until Fred’s death in 1990.

By the late 1970s, Nancy finds herself in the town’s Maryvale High School, and then off to college at the nearby state school, Geneseo. At the time, she has her eyes fixed on modeling and acting.

Nancy decides to take her mother’s maiden name of “Noble” for the stage, only to discover there’s another “Nancy Noble” in the Screen Actors Guild. She chooses “Chelsea” instead, because her friends were already calling her by that name.

Landing a role on a soap opera, the opportunity turns out to be short-lived when producers kill off her character after just three months. After graduation, she gets some work doing off-Broadway productions, but then ultimately decides to move to California.

Out on the West Coast, Chelsea Noble’s acting career starts strong in 1988 and 1989, as she lands bit parts in episodes of Full House, Who’s the Boss, Cheers – and the soap opera, Days of Our Lives.

But the young actress’s big break came in 1989 when she landed the recurring role of Mike Seaver’s girlfriend Kate McDonnell on the hit sitcom, Growing Pains. Mike Seaver’s part was played by a young Kirk Cameron.

“It is a dream job,” she said at the time. “Not only because Kirk is Kirk. He is an incredible person, a down-to-earth great guy. But the show has been established for five years with very professional and talented people that I’m learning a lot from. And it feels great to have a part I really feel comfortable with.”

Chelsea would wind up dating Kirk in real-life, too, but only because Kirk had first found the Lord at seventeen.

Another actress on the show had invited the teen heartthrob to church with her. Cameron was an atheist but was interested in the girl, so he went. Chuck Swindoll happened to be preaching. He was moved and convicted by Dr. Swindoll’s message that morning. Shortly afterward, Kirk gave his life to Christ while sitting on the side of the road. He says everything changed for him that day – his language, ambitions, and goals. And his eternal fate.

Kirk Cameron’s sister, Candace, had achieved her own measure of fame playing the role of D.J. Tanner on Full House. By the time she was twenty, she knew the Lord, but was nevertheless feeling very unfulfilled – a bit aimless and empty. That’s when Kirk, now a fervent believer, gave her a copy of Ray Comfort’s “The Way of the Master.”

“It changed my walk with God forever,” Candace would later say. “It talked about the 10 Commandments and showed me my sin in its true light. You see, when I prayed the ‘Sinner’s Prayer’ that day in church when I was 12, I asked God to forgive my sins. But I didn’t even know what sin was. But the law showed me my sin.”

“As I went through every commandment, I saw that I’d broken all of them. Then I learned that God was going to judge me by this standard, not the world’s standard. So, while I thought I was a good person compared to other people, I saw that I was a horribly bad person by God’s standard. It was then that I truly recognized and understood my sin and what Jesus did for me. I broke the Law, and Jesus paid my fine,” Candace Bure reflected.

Danica McKellar, a good friend of Bure’s, and a fellow former childhood star and current actress (she played Winnie Cooper on “The Wonder Years”) shared the good news that she, too, was now a Christian – and credited Bure with discipling her along the way. Apparently, McKellar had been reading a Bible that was edited by Bure. It’s called the “One Step Closer Bible.”

“I will tell you, I have not had much of a Bible education in my life, a little bit here and there, but it’s not part of how I was raised,” she said. “I’m looking forward to learning more about it because Candace is a really awesome person and she’s got her own notes and things in here to kind of guide you through. Since I don’t know a lot about it, I’m looking forward to using it in that way. So thank you, Candace.”

Everything is connected in God’s economy, even by an invisible cord stretched across the years.

Consider for a moment:

If Chelsea Cameron had not been adopted back in Buffalo by Fred and Irene Mueller, would she have grown up to be the strong and convicted woman of faith she is today?

If the Muellers had not nurtured, shaped and encouraged their daughter to follow her dreams, would she have been as successful in Hollywood?

If Chelsea had not been such a strong woman of faith by the time she reached Hollywood, would Kirk Cameron, a newly minted believer in Christ, have been drawn to her as he was?

And then if Kirk Cameron had not heard Chuck Swindoll and then been discipled as he was, would he have been in a position to disciple his own sister as he did?

What about Candace Cameron Bure? Had she not been discipled and on fire for the Lord herself, would she have ever produced the Christian teaching that then moved and ministered to Danica McKeller and countless others?

It all comes back to a faithful and inexpressible mystery of God, always working behind the scenes and often when we cannot even see it.

It all brings to mind the words of the hymnist Walter Chalmers Smith, who in 1867 wrote:

Immortal, invisible, God only wise,
In light inaccessible hid from our eyes,
Most blessed, most glorious, the Ancient of Days,
Almighty, victorious, Thy great name we praise.