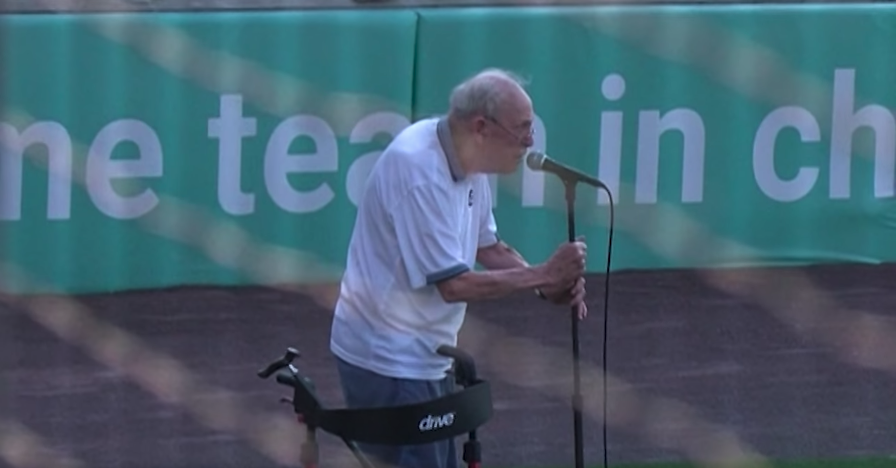 In a moment that has pulled at the heartstrings of millions, one 96-year-old veteran of World War II sung the national anthem at a Minor League Baseball game. His performance was captured on video and has since gone viral.

That veteran, John Pylman, sang “The Star-Spangled Banner” right before a West Michigan Whitecaps baseball game. According to MLive, Pylman “enlisted in the Air Force in 1943, a year after he graduated from high school. He was a navigator on the Boeing B-17 Flying Fortress plane as part of the Eighth Air Force in England.”

Video of Pylman singing was shared by the West Michigan Whitecaps and has since garnered over 3.6 million views, more than 183,000 likes and over 10,000 comments on Facebook.

Introducing Pylman, the announcer said, “Ladies and gentlemen, boys and girls, please remain standing. We ask everyone to remove your caps and join 96-year-old World War II veteran John Pylman as he leads us in honoring the United States of America with our national anthem.”

Pylman, standing near home plate, let go of his walker, grabbed the microphone stand and began to sing.

After concluding, Pylman appeared to look to the American flag, and gave a salute.

“Thank you, John, and thank you for your service,” the announcer said.

Speaking to MLive about singing the national anthem, Pylman’s patriotism shone through.

MLive told Pylman that his rendition had gone viral on Facebook and been seen by millions of people. Pylman said hearing that “made his day.”

“I can’t believe it,” Pylman added. “That’s my attitude right now – I just can’t believe it. I was amazed at the crowd’s reaction, and I thought, okay, this is a good thing to have done.”

One commentor on Facebook wrote, “God Bless you. Thank you for your service and your beautiful rendition of our wonderful Anthem!”

“Thank you for serving our country. If he can stand and sing our National Anthem we can too!” another added.

Pylman also told MLive that he doesn’t have any professional singing experience.

“I just like to sing. And I’m pretty good at it,” he said. He’s sung previously at eight other Whitecaps games.

Pylman added that he sings the national anthem to honor those who gave their lives for the country.

“I had some dear friends who didn’t survive World War II – five of them in my ninth-grade class,” he said. “We’ve got a wonderful country. It’s worth fighting for.”