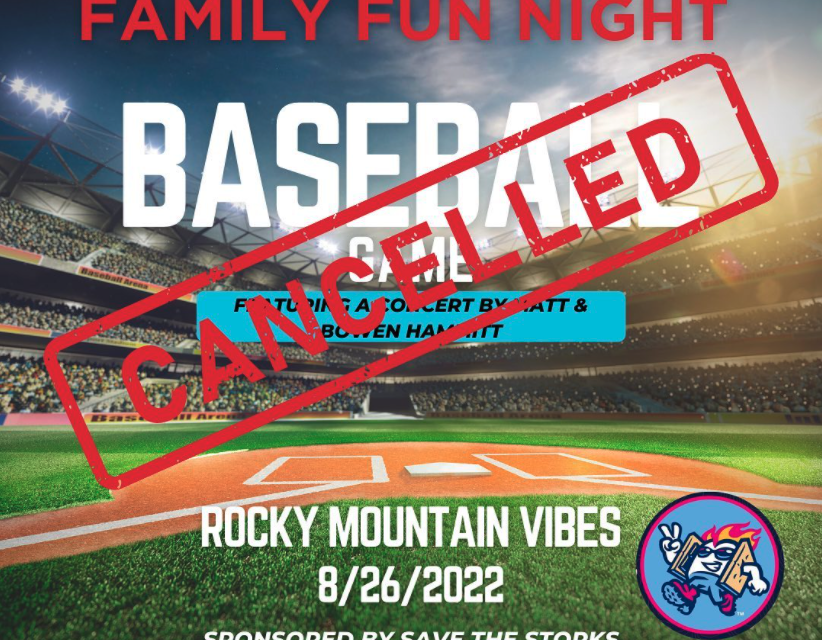 The Rocky Mountain Vibes, an independent baseball team of the Pioneer League, has landed in hot water after cancelling its Family Night hours before the first pitch, putting the pro-life organization sponsoring its event on ice.

The Vibes were set to host Family Night last Friday, where award-winning Christian artist Matt Hammitt and his son, Bowen, were set to perform after the game.

The pro-life organizations Save the Storks, and Pikes Peak Citizens for Life, were sponsoring the event – at least, until it was cancelled.

Save the Storks equips pregnancy resource centers (PRCs) with mobile medical clinics (Stork Busses) that can provide women with free pregnancy tests, ultrasounds and STI testing. According to the organization, their Stork Busses have helped PRCs save over 8,000 preborn babies.

The Rocky Mountain Vibes are located in Colorado Springs, Colorado and play home games at UCHealth Park in the city.

The Daily Citizen spoke with Luke Vercollone, National Development Director at Save the Storks.

Vercollone told us that a ton of work had gone into planning the event, including the creation of various promotions and ads, handouts, a booth, as well as the scheduling of a post-game concert.

Everything was on track, until the Vibes organization informed Save the Storks at 10:30 am on the day of Family Night that it was cancelling the event.

“They kept all the ticket sales,” Vercollone said. “We [had] tripled their average attendance. They had their most tickets sold in a year that night, although many people didn’t show up because of what they did.”

Vercollone told us that he was scheduled to throw out the first pitch. When he picked up his 12-year-old son Augustine from school that day, his son was excited that his dad was going to start the game.

“He was devastated and it was confusing having to tell him why we got cancelled,” Vercollone told us.

Instead of Family Night, the Vibes opted to promote a different event.

“It was [International] Dog Day across the country, so they emphasized and promoted that instead,” Vercollone said.

Initially, Vibes officials told Save the Storks that they had cancelled the event because of requests made by their “main sponsor … and other sponsors.”

However, Save the Storks has since said that a representative of UCHealth had contacted them and “stated that they were not one of the Vibes’ sponsors behind this decision.”

In a statement to the Daily Citizen, UCHealth Spokeswoman Cary Vogrin said that UCHealth was not involved in the decision to cancel Family Night.

“In fact, we were under the impression that the event was moving forward, and we were surprised to see the post on social media from Save the Storks stating their event was canceled,” Vogrin said.

After the story broke, Vibes released a statement claiming sole responsibility for making the decision to cancel their Family Night.

“While we value all our sponsors and ticket holders, they do not make decisions regarding the nature of our post-game entertainment, or groups that come out to our stadium to raise awareness for their causes,” Vibes said.

“The Vibes made this decision after seeing the proposed assets from the partner in question because they felt that the partner would hinder the team’s mission in providing fun and affordable family entertainment. Any statement placing blame on any outside party for cancelation of tonight’s events is inaccurate. The Vibes made this decision internally and stand by their choice.”

Vercollone told us that those who disagree with Vibes’ decision to cancel Family Night can respectfully reach out to Jake Hathaway, Vibes’ Director of Sales & Hospitality at [email protected], to express their disagreement with the decision.

“They’re not backing down from their decision to cancel,” Vercollone said. “That’s foolish of them. They should just apologize and admit they made a mistake.”

“We’re working on a future Family Night,” he added. But it won’t be with Vibes.

Photo from Save the Storks.