Billy Graham, Albert Einstein and One Railroad Engineer’s Evangelistic Effort to Minister to the Masses 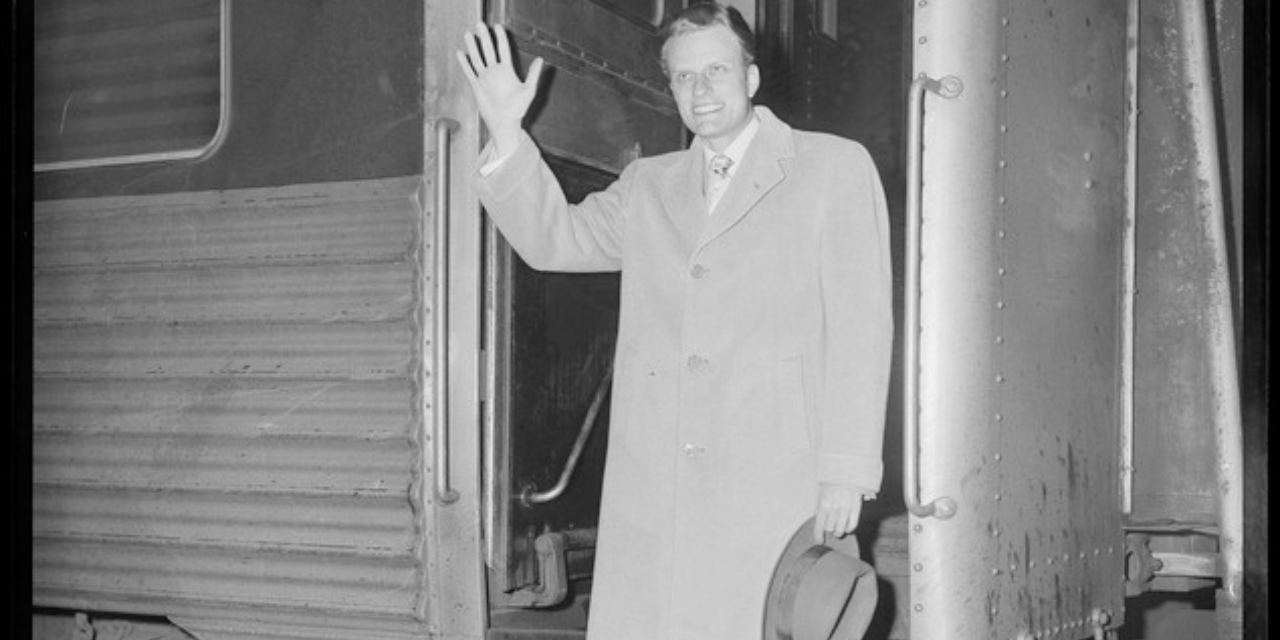 News broke early Thursday that a labor deal had been reached between freight rail companies and unions, likely avoiding what would have been a crippling strike and blow to the critical flow of countless consumer goods.

In this digital and jet age, it’s difficult for many of us to appreciate just how much the economic engine of America still relies on the old-fashioned railroad. Though down considerably from over 400,000 miles of laid track throughout the United States in the early part of the twentieth century, just over 160,000 miles of steel, spikes and ties remain. Accordingly, railroad employment has dropped, too – from just over 1.5 million workers in 1947 to just over 200,000 today.

Railroads and religion may seem disparate subjects at first glance but consider the significant role trains have played in Christian evangelism over the years. Distances that once took months to travel were reduced to days, and with greater comfort than ever before – which then led to more travel and more ministry than ever before, too.

Dwight L. Moody and Billy Sunday both relied heavily on trains as they barnstormed the country to spread the Gospel. Not only did they use it to get where they were ultimately going – but they often took advantages of the stops along the way to minister those alongside the tracks. Even Dr. Billy Graham, whose ministry bridged the transition from train to plane, regularly took trains between cities on his “Crusade” tour.

Luther S. Harkey of Sanford, Fla., a locomotive engineer on the Atlantic Coastline Railroad in the first half of the twentieth century, may not have been an evangelist the likes of Graham, Sunday or Moody. Yet his story represents the power one man who is willing to step out in faith can have in leading countless others to Jesus Christ.

The oldest of nine children, Luther happily hired onto the railroad as a young man and then proceeded to live a worldly, sinful life. Years would pass until one night, physically sick and fed-up with his personal situation, the engineer stepped out onto the tracks.

“I made an altar of the cross ties along the track, and there for the first time I reached out and found God,” he wrote. “I asked first that he would save my poor miserable soul and give me sweet assurance that He loved me. God, in His abundant mercy, heard my cry. He saved me and healed me, and without any sign of pain, I returned to my switch engine and finished my job.”

Overwhelmed and grateful for his conversion, Harkey felt led to evangelize others. He soon after started the “Railroad Evangelistic Association” and began a magazine, believing this was a way he could “go into all the world” (Mark 16:15).

Over 80 years later, “Rail Hope America” carries on. “Jesus is the light at the end of the tunnel,” they like to say. Adding, “The safest way to travel – the Bible and railroad way.”

In beginning his evangelistic outreach, Harkey, who passed away in 1949, wrote to his new readers:

I don’t just mean for you to promise to do something, but what we and God expects is our dead level best in this all-out Gospel program to get sinners saved and to help bring about a great spiritual awakening – not only to railroad folks, but a nationwide revival.

Since Dr. Billy Graham found himself often riding the rails, he liked to tell the story of Albert Einstein taking a train from Princeton University. When the conductor approach him to punch his ticket, the famous professor scrambled unsuccessfully to find it. He looked in his pockets and jacket, but to no avail.

Einstein nodded. But as the conductor continued down the row, he noticed the old man was now down on his hands and knees looking under the seat for the ticket.

“Dr. Einstein, Dr. Einstein, don’t worry, I know who you are,” he insisted. “It’s no problem. You don’t need a ticket. I’m sure you bought one.”

“Young man, I too, know who I am,” said the wild haired academic. “What I don’t know is where I’m going!”

Thanks to Luther Harkey’s confession and conversion, he knew where he was going – and he spent the last years of his life helping countless others find their way to a saving relationship with Jesus. This is all despite the fact that Luther Harkey wasn’t a minister. He wasn’t a writer. He knew nothing about starting a magazine. But he had faith in Christ and felt a call on his life to do something.

Harkey’s faith filled effort carries on – reminding us that no matter who we are, the Lord can use each of us – if we’re first willing to trust Him.