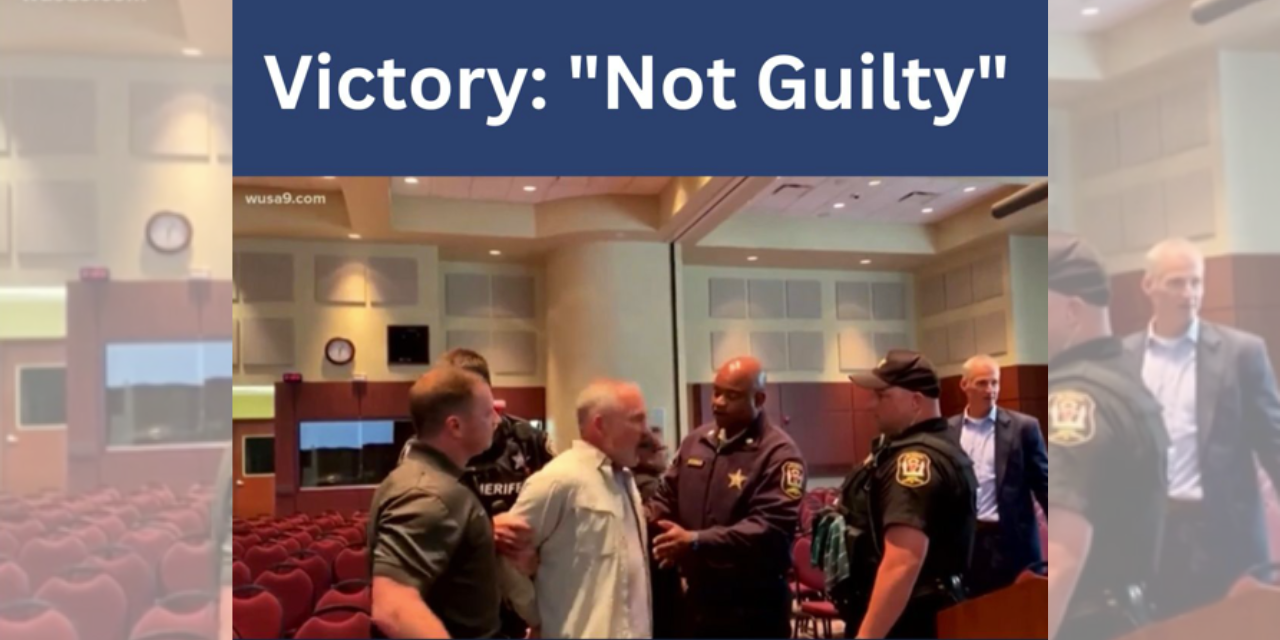 Jon Tigges made headlines across the country when he was arrested and charged with trespassing after a boisterous Loudoun County School Board (LCSB) meeting, on June 22, 2021.

Mr. Tigges was one of over 700 citizens who showed up to the June 22 School Board meeting to express their concerns on a variety of issues including transgender policy 8040, COVID mandates, critical race theory, and the recent firing of teacher Tanner Cross.

Cross, as the Daily Citizen reported, spoke at the May, 2021 LCSB meeting, opposing the Northern Virginia school district’s proposed transgender rules, policy 8040. The controversial policy allowed transgender-identified students to use restrooms, locker rooms and showers of the opposite sex and required staff and students to use students’ “preferred pronouns.” Cross successfully sued the district.

Hertzler went on to explain the circumstances surrounding Tigges’ arrest:

Around 250 people signed up to speak, but the Board ended public comment abruptly after just 50 speakers and exited the room for a temporary recess. During the recess, Mr. Tigges encouraged those who were denied their opportunity to speak to come to the front of the seating area to continue providing their comments for everyone to hear.

Soon after and without any prior warnings, then-Superintendent Scott Ziegler announced that the gathering was an “unlawful assembly” and anyone who did not leave the room immediately would be subject to arrest.

When Mr. Tigges insisted that he had a right to be in the room and explained that he would not leave, he was arrested and charged with criminal trespassing. Mr. Tigges was the second person arrested in the room while the Board had recessed. The other was Scott Smith, whose daughter was sexually assaulted in the school bathroom by a male.

When asked about that assault at the June meeting, Ziegler, who was interim superintendent at the time the girl was attacked, stated, “To my knowledge we don’t have any records of assaults occurring in our restrooms,” and, “The predator transgender student or person simply does not exist.”

But this was patently false. Zeigler moved the “gender fluid” student to another school where he assaulted another girl.

A special grand jury later investigated the school district and indicted Zeigler on charges related to his handling of the sexual assault. He was also let go by the district, which continues to pay his $323,000 annual salary and compensation for the next year.

Hertzler explained the ruling from the Circuit Court exonerating Tigges:

Today, Judge Fleming held that the Commonwealth had not shown that anyone other than the School Board had authority to remove people from the public meeting room. He also found that Mr. Tigges had successfully pled an affirmative defense of acting in good faith in believing he was in the room lawfully.

Because of this, the judge did not address the First Amendment Constitutional claims of free speech, protest, and assembly.

FFLC is the legal arm of The Family Foundation of Virginia (TFF), a Focus on the Family allied Family Policy Council. The legal organization takes cases on behalf of life, religious freedom, family and faith.

The law center also successfully sued LCSB and Zeigler, on behalf of several parents, for shutting down the June board meeting and excluding the public. FFLC won that case in May 2022, when the Circuit Court ruled that the board and Zeigler had violated the Virginia laws “specifically pertaining to requirements that meetings be open and accessible to them as members of the public.”

Tigges said of the ruling:

Today’s ruling is a win not just for me, but for all the parents and citizens of Loudoun County who have been systematically silenced and shut out of the process by this School division over the last few years.

I didn’t serve my country for decades overseas only to come home and have my rights trampled on here. I hope this victory only encourages more parents to speak out and get involved to take back their children’s education and reclaim their basic rights.

Tigges, who owns a bed and breakfast and wedding venue in Hamilton, Virginia, is no stranger to social and political activism. As The Epoch Times reported, his activism began in June 2020, when his business was closed under lockdown orders:

For more than six months, he protested against the COVID-19 lockdown every Friday morning in front of the Loudoun County government building in Leesburg, Virginia.

In April 2021, he founded the Patriot Pub Alliance, a casual in-person meeting for others protesting the lockdowns. The gatherings grew and spread to other counties and helped foment the activism against school board actions in Loudoun County.

Then some friends asked him to “consider visiting other parts of the country to share the Patriot Pub experience.” He was frustrated and angry with local politics and resisted the idea, but later he said that II Chronicles 7:14 “smacked me in the face.”

Tigges realized he’d been reacting out of anger, not responding with humility. He did as the verse instructed:

I had to humble myself. And I needed to turn from my wicked ways. I needed to depend more on prayer than on my own action.

The summer after his arrest, Tigges visited 31 states talking about the Patriot Pub Alliance, his own activism, and the need for Christians to band together for community and support as they advocate for freedom and fundamental constitutional rights.

As he spoke with people across the country, he “encouraged everyone he met to start local social gatherings to share ideas.”

He told The Epoch Times that it was his confidence in God and those supportive relationships that gave him courage and peace, saying, “And that’s why, on June 22, I felt completely unafraid to stand there and be arrested. As I knew, I had hundreds of other people that had my back, and still do.”

The Family Foundation of Virginia