Fact: 85% of the 19 Couples Married in the White House Remained Together “Till Death” Parted Their Unions 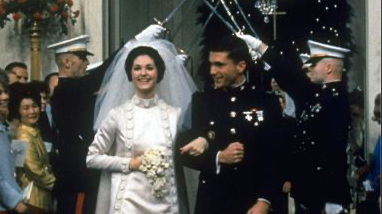 This coming Friday (December 9th) marks the 55th wedding anniversary of Lynda Bird Johnson (daughter of the late president Lyndon Johnson) and former Virginia Senator Charles (Chuck) Robb, who also served as governor of Old Dominion back in the 1980s.

Beyond the blue blood and celebrity familial ties, what set this wedding apart was the fact that Johnson and Robb were married in the White House. At the time, the ornate East Room ceremony was the first such one within the executive mansion walls in 53 years – and the fifteenth overall. Since the Robb-Johnson nuptials, there have been four more – including this past November 19th when Naomi Biden, granddaughter of the president, wed Peter Neal on the South Lawn.

Back in 1967, the Robb-Johnson wedding was front page news. “The power and majesty of the presidency, the beauty of the White House, and the knowledge that the bridegroom, a Marine captain, would soon go off to war heightened both the splendor and poignancy of the wedding,” wrote The New York Times across a four-column spread on page A1.

Weddings are big news, and good reason to celebrate. A large, two-and-a-half-foot gold-painted cross hung inside the East Room that day in 1967, and the minister read from the “Book of Common Prayer.” In reciting the vows, the happy couple pledged to live together “after God’s ordinance” and hand-in-hand, knelt together in silent prayer.

Of the nineteen weddings officiated inside the White House, not all of them have enjoyed the same degree of long-term compatibility and happiness as the Robbs’ more than half-century union.

Eleanor Wilson was the youngest daughter of President Woodrow Wilson. Her marriage to William Gibbs McAdoo, her father’s Secretary of the Treasury, ended in divorce after 21 years. Nellie Grant was the third child and only daughter of President Ulysses S. Grant. Despite objections from her parents, she married Algernon Sartoris, an English singer. Their wedding was also in the East Room, which was overflowing with flowers. They had four children in quick succession – but Sartoris’ womanizing and chronic alcoholism proved to be too much, and the couple eventually divorced.

On the upside, at present date, 85% of the couples married in the White House remained together “till death” parted their unions. One of the most publicized of those successful marriages was President Grover Cleveland’s union to Frances Folsom. A lifelong bachelor and 27 years her senior, the Cleveland-Folsom wedding, then and now, has been the only time in our nation’s history that a president was wed in the White House. At 21 years of age, she was the youngest first lady. When her husband died in 1908, after serving two terms in office (with four years off in between), she was sitting by his side.

But from the first White House wedding in 1812 until the most recent one last month, the common denominator in all nineteen of the special ceremonies has been strong, even intense public interest, and why not? We love weddings. But I think the interest goes well beyond the “royalty” and the romance of a sacred ceremony of flowers and dresses and high-brow music.

Despite mounting evidence to the contrary, people know that marriage matters. It offers a life of meaning and purpose. It’s not a magic potion – but it goes a very long way in helping make our days more pleasant.

This is one of the reasons Focus on the Family began back in 1977. Our founder, Dr. James Dobson, saw that marriages were struggling – and when marriages falter, culture fails. For the last 45 years, and now led by Focus president Jim Daly, our organization stands ready to lift up the institution of marriage and help couples sand and strengthen their sacred unions.