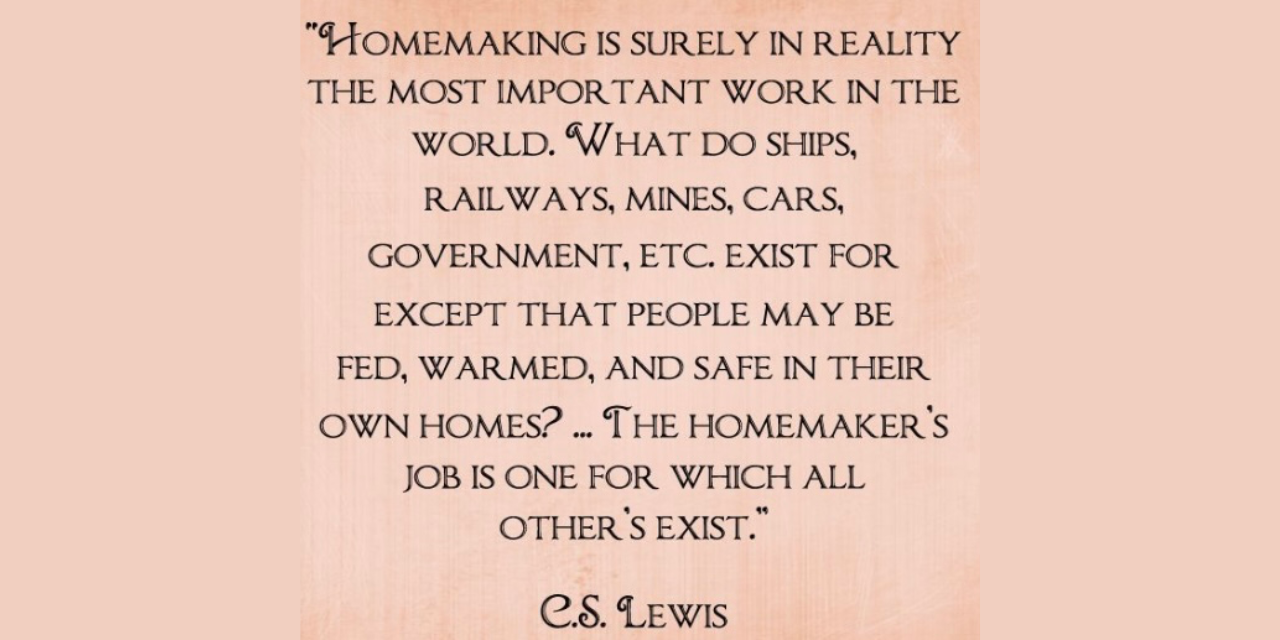 Our friends at the Institute for Family Studies are out today with a commentary on culture’s misunderstanding of homemaking. Ivana Greco writes:

The decline of homemaking—both as a term and a recognized skill—is the result of a popular understanding that homemaking skills are no longer needed, given the technological advances of the twentieth and twenty-first centuries.

Ms. Greco goes on to quote the late Betty Friedan, a radical feminist who once suggested new appliances and other advancements had rendered practical parenting work moot. In other words, she envisioned something of a “Jetsons” future where all you’d need to do to run a home is press a few buttons.

Jessica Valenti, a modern-day self-described feminist, is also quoted as suggesting homemaking is a luxury for “women who had husbands with enough money that they could stay at home.” But Ms. Valenti goes even farther, suggesting, “There is no version of American housewifery that has ever – or will ever – make women happier, healthier, or more fulfilled. Anyone who tells you differently is trying to sell you something. And it might just be your own oppression.”

It seems neither Friedan when she was alive nor Valenti spend much time with happy families where full-time homemaking is the norm – and where moms and dads find the opportunity to shape and mold the next generation very fulfilling.

By technical definition, the percentage of homemakers in America has actually remained fairly steady over the past three to four decades. According to Pew Research, nearly 20% of parents don’t work outside the home. Mothers represent over 90% of that number, though stay-at-home fathers are on the increase.

It’s irrational and illogical to denigrate or discourage homemaking. After all, why wouldn’t a family want to enjoy the benefit of someone dedicated to caring and nurturing children, along with managing the various aspects of homelife?

Betty Friedan’s ignorance was on full display with her reducing homemaking to a Merry Maid service. Yes, meals need to be made and clothes need to be washed, but there’s much more to caring for children than keeping them warm and well fed.

Some of the happiest memories of my life revolve around sitting with my mother when I was a young boy down on Freeport, Long Island’s “Nautical Mile,” and watching the fishing boats come and go. These were carefree days both before I started school, and even during. Her values and loves became mine during those sessions. She answered my questions and instilled in me a tremendous excitement and enthusiasm for life and my future.

G.K. Chesterton honored and appreciated the art and significance of homemaking. Here’s what he once wrote:

[Woman is surrounded] with very young children, who require to be taught not so much anything as everything. Babies need not to be taught a trade, but to be introduced to a world. To put the matter shortly, woman is generally shut up in a house with a human being at the time when he asks all the questions that there are, and some that there aren’t…

My mother died ten years ago this coming Thursday, but in her final hours, she talked to me about those days on the water. “I loved every minute of it,” she said with a smile. She didn’t say a word about serving as a secretary to the CEO of the Equitable Life Insurance Company, where she worked before she and my father were blessed with five children.

If we’re serious about wanting to solve some of culture’s most vexing and challenging problems, we would be wise to laud and encourage homemaking and declare it to be what it is – the most important job in the world.