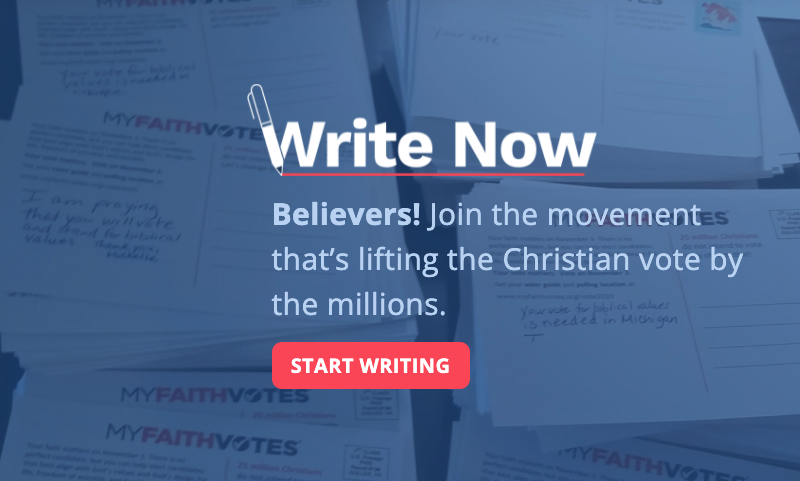 A nonprofit organization that exists to encourage Christians to get out and vote is launching a new campaign ahead of this year’s upcoming midterm elections.

My Faith Votes is a nonpartisan, nonprofit organization that exists to “motivate, equip and activate Christians in America to vote in every election, transforming our communities and influencing our nation with biblical truth.”

The organization encourages Christians to “pray, think and vote” to protect the organization’s four core pillars: religious freedom, the sanctity of life, strong families and marriages, and compassion and support for those in need.

My Faith Votes’ new “Write Now” campaign has the goal of sending 1,000,000 personalized postcards and letters to Christians, encouraging them to vote in the upcoming midterm elections.

Just 10 days after the campaign was announced, over 1,000 volunteers have already committed to sending 300,000 handwritten notes, with all available postcards already pledged.

The postcards and letters are provided by My Faith Votes, which also walks volunteers through the entire process. After being written by volunteers, they mailings are sent to specifically targeted Christian voters in particular states.

In an interview with The Daily Citizen, My Faith Votes’ CEO Jason Yates told us that the postcards and letters are being sent to nine battleground states: Nevada, Arizona, Georgia, Florida, North Carolina, New Hampshire, Pennsylvania, Wisconsin, and Michigan.

“We’re reaching out and we’re encouraging Christians from across the nation to join with us, to take part in this and to do something,” Yates told us. “We can all do something. And this is something that’s easy and they can invite friends and family and church members to join them in doing.”

During the 2022 midterm elections, all 435 seats in the House of Representatives and 35 of 100 seats in the Senate will be contested.

My Faith Votes’ campaign for this year’s midterms constitutes the fourth time that the organization has engaged in a get-out-the-vote effort, after sending postcards during the 2020 general election, the 2021 Senate runoff elections in Georgia, and then in the Virginia gubernatorial election in 2021.

My Faith Votes found that during their campaign in Virginia, their efforts provided a 20% increase in voter turnout for those who received a postcard.

“People are looking around and they’re waking up and saying, ‘We have to do something.’ But they’re feeling powerless, and they’re wondering, ‘What can I do?’ Yates told us.

“My Faith Votes is giving people a simple, easy thing they can do to influence others to activate their faith and bring the influence of their faith into the public square.”

If you, your church or Bible study group want to get involved in My Faith Votes’ “Write Now” campaign to engage Christians to vote in the upcoming midterm elections, click here. Individuals or groups can sign up to get involved from now through September 2022.

Photo from My Faith Votes.