A major congressional report on the state of the two-parent family has just been released and the numbers show a continued and troubling decline in the most important family well-being indicators. It comes from the Social Capital Project of the Senate Joint Economic Committee. The overall picture is not a bright one, but nor is it all bad news. The good news is that the U.S. divorce rate largely leveled off in the mid-1980s and has declined measurably in the last few years. As well, the number of children living with two parents is higher than most Americans would assume and this number has remained largely level for the past few years.

Overall, nearly half of all youth in America today will spend some part of their childhood living apart from at least one of their biological parents, whereas only one-third of children did so in the 1960s and less than a quarter did in the 1950s.

This is largely because of the sustained decline in the marriage rate in the United States. Between 1962 and 2019, the percentage of women who are married dropped from 71 percent to 42 percent, and the percentage of 30-something women who never married increased sharply from 7 percent in 1962 to 35 percent in 2019. Looking at this decline another way, there were 74 marriages per 1,000 unmarried adult women in 1960. But as of 2018, that number declined by more than half, to 31 per thousand.

Not only are we marrying less today, but we are marrying later in life, even while marriage remains a centrally important life goal for most young men and women. In 1960, the median age at first marriage in the United States was 20 for brides and 23 for grooms. Today, each are doing so at ages 28 and 30, respectively. Of course, this has massive implications for fertility and parenthood by reducing the number of children married couples are having as well as making them older as parents. The reasons for the decline in the divorce rate have been a lively debate among sociologists with no clear answer emerging. Most agree however that it’s most likely a function of Baby Boomers increasingly aging out of the population while cohabitation and settling into singleness have increased dramatically among younger adults. Prior to 1960, it was difficult to find anyone who lived together outside of marriage, but of course that number started to skyrocket through the 1970s and 80s. Today, 12-13% of coupled households in America are unmarried. From an individual perspective, from 1960 into the mid-70s, only 11 percent of American women had lived with someone prior to marriage. That number jumped to 32 percent in the later 70s and has continued to soar unabated. For the past two decades, around two-thirds of new marriages have been preceded by some form of either one or both couples having cohabited.

The percent of births to unmarried mothers jumped from only five percent in 1960 to 40 percent today. This is just down a tick from a historic peak of 41 percent in 2009. Unmarried births are more often seen among women in the later 20s and 30s, rather than among younger women. Human nature being what it is, pre-marital conceptions have always been a part of human experience. Pre-wedding births in such large numbers have not been. This is largely a recent phenomenon of the last four decades in both Europe and America. For most of history, a man who got his girlfriend pregnant “stepped up” and “did right by the girl” because that’s what a man did. But easier access to abortion and the availability of the birth control pill created a massive shift. Beginning in the early 1960s, 43 percent of non-marital conceptions resulted in married births, but today fewer than 10 percent involve a shotgun marriage. In fact, aside from the actual decline in marriage rates overall, scholars find that the decline in shotgun marriage has been the single most important factor driving unwed childbearing among women under thirty.

What is most disturbing in all this data, apart from what the decline of marriage means for the life-prospects of the children being raised in such homes, is how marriage and marital childbearing breaks down by educational status. While greater education often translates into more liberal attitudes regarding sexuality and family, it does not translate into more liberal behavior in terms of life choices. The more educated and well off financially one is, the more likely they are to be married and have their children within that marriage. Marriage and marital childbearing decline as educational status declines. The trendlines are quite dramatic. Unfortunately, this report explains that these numbers breakdown distinctly by race as well, with stark differences. Let’s start with declining marriage rates. All races have largely been declining at the same rate as non-Hispanic Blacks as the outlier. 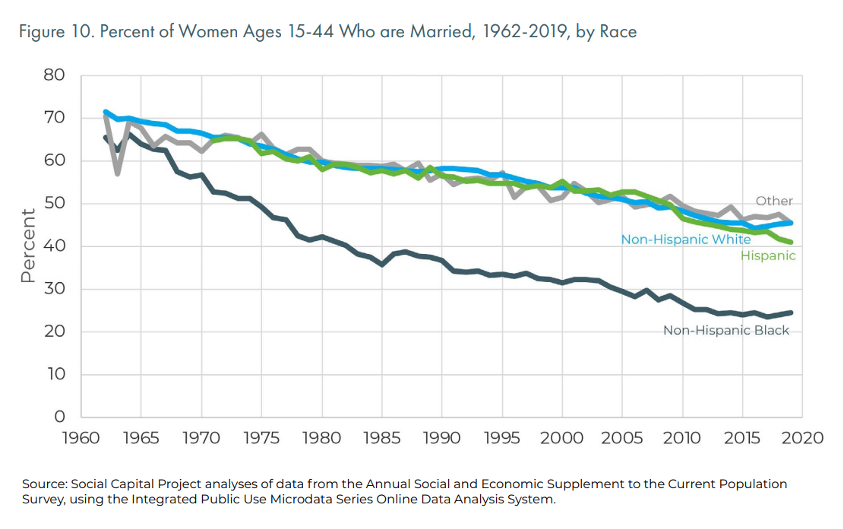 The same is true for births to unwed mothers and children living apart from both mother and father, with a positive development of these seeming to have leveled off slightly. The report concludes with the driving question of “why?” What’s driving family breakdown in America today? What has changed over the five decades that would affect these trends? The report explores the dominant sociological “marriageable men” hypothesis which simply asserts that marriage is declining among certain groups because women are increasingly finding the pool of available men in their communities to be unattractive economic providers. They correctly reject this theory as if marriage is primarily an affair of a healthy bank statement, recognizing that previous marriage rates remained strong while men had much fewer educational and employment opportunities.

The authors suggest an alternative theory for marital decline: rising affluence. They contend that “rising family instability is actually a byproduct of the nation becoming richer.” Today, they explain, “Americans can devote considerable attention to self-fulfillment, privacy and individualistic pursuits” and these values are counterproductive to the ideals of marriage. This was the forceful argument effectively put forth in the early 1980s by the eminent sociologist Robert Bellah and his research team from the University of California, Berkeley in their classic book Habits of the Heart.

Whatever the reason, this congressional report concludes, “Until we get a better sense of what causes family breakdown to worsen and of what policies are effective at reversing breakdown, policymakers will need to experiment with a variety of approaches.”