So far, the seasonal flu has all but disappeared this year.

The 855 confirmed cases of the flu is cumulative from September 27, 2020 which marks the beginning of this year’s flu season. Data is reported by the U.S. Influenza Surveillance Tracker provided by the CDC.

For Week 51, which runs from December 13-19, there were 36 positive specimens, including 15 of Influenza A and 21 of Influenza B, according to the CDC.

These numbers were reached by combining tests performed both by clinical laboratories and public health laboratories. 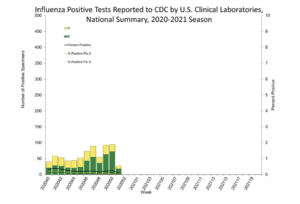 The very low number of positive flu cases so far for the 2020-2021 flu season looks even more dramatic when compared to last year’s flu seasons.

The CDC currently states on its website, “The number of influenza positives reported by public health labs remains much lower than normal despite a higher than normal number of tests performed.”

“Seasonal influenza activity in the United States remains lower than usual for this time of year,” the CDC adds.

The CDC also tracks flu data on a geographical basis. Its analysis is broken down in to all 50 states plus New York City, Washington, D.C., the Virgin Islands, Puerto Rico, and the Northern Mariana Islands to total 55 separate jurisdictions.

The CDC assigns every state an “activity level” to show how active the flu is in each state. These levels include “very high,” “high,” “moderate,” “low,” “minimal” and “insufficient.”

As of December 19, fifty-four jurisdictions are classified as having “minimal” flu activity while one is designated as “insufficient.”

The Daily Citizen reached out to the CDC inquiring as to why the seasonal influenza numbers are so low this year but did not receive a response as of publishing time.

The low number of flu activity is not just occurring in the United States, but around the globe as well.

As The Daily Citizen previously reported, citing NBC News, “Data from Australia, Chile and South Africa shows a tiny fraction of influenza cases from April to July… In those three regions, there were just 51 influenza positive specimens among 83,307 tests for a positivity rate of 0.06 percent.”

The months of April to July are the peak flu season for countries in the Southern Hemisphere.

“In contrast, the positive rate in those regions during the same time period in years prior was close to 14 percent,” NBC News notes.

Part of the reason for the low flu numbers could be an increased number of people receiving the flu vaccine. According to the CDC, as of December 4, 2020, over 189 million doses of the flu vaccine have been distributed which “is the highest number of flu doses distributed in the United States during a single influenza season.”

However, this theory does not explain the reason for correspondingly low flu numbers in other countries. Additionally, the annual flu vaccine is usually only 40-60% effective.

It remains to be seen whether the number of flu cases will increase in the coming months. But three months into this year’s flu season, no such spike has appeared.