This verse marks the end of the Bible, and it also concluded an incredible nine-year project for Caroline Campbell, 28, who, with one final stroke of her pen, completed her goal of writing the entire Bible – from Genesis to Revelation – by hand.

But how does someone start a commitment to complete this kind of task? Where does one muster up the resolve to endure the work that goes into it? For Caroline, it was as simple as a passing comment by her father, Kenny.

In 2012, Caroline was 19, and Kenny was busy completing some spring cleaning when he opened a chest and stumbled across multiple pages of handwritten Scripture. After a look, he realized that Caroline had been copying down the Scripture that Carl Broggi, their expository pastor, had preached on.

“I said, ‘You have so much written here – that’s amazing! You know, you ought to just start from the beginning!’” Kenny said.

Caroline’s response set in stone the beginning of the nine-year project.

While many of us have made a commitment to accomplish something and silently allowed it to fade away into nothingness when we realize the magnitude of what we’ve obligated ourselves to, Caroline never had any doubts or desire to stop. She wrote for two hours a day, often taking her papers with her to work away from the house as well, such as when the family went to support her youngest brother in his golf tournaments. But this support was reciprocated by both of her brothers, Christian and Matthew, for her work, as well as the rest of her family.

When Caroline had completed a book, she would go to her family and announce, “I’m done.” But if her family wasn’t home when she finished, she would go ahead and start on the next book, not wanting to waste a moment that she could use to write more. And after many years of hard work, she had completed the 39 books of the Old Testament, and her pastor met with her to congratulate her on her progress.

“I asked him if he wanted us to bring the notebooks in, and he said ‘sure,’” Jennifer, Caroline’s mother, recalled. “So, we had to go get a wagon.”

Soon enough, it was 2021, and Caroline was just about two months away from completing the entire Bible. In March, the Campbells ran into pastor Broggi in a store and alerted him that she would likely be done in a couple months. Broggi desired to do something special for Caroline to celebrate her and her accomplishment – a Sunday service where the whole congregation could recognize her.

“Hundreds of people…left their Adult Bible Fellowship early, which was wall-to-wall people, just to see her presentation,” Broggi said. “It was really something. It was very moving.”

On June 6, Caroline had transcribed all but ten of the 782,815 words of her 1973 New American Standard Bible – she had saved the last verse of Revelation for the celebration. As she finished writing, the congregation at Community Bible Church gave her a standing ovation.

“She’s a great young lady,” Broggi said. “As I told the congregation that morning, I’ve never met someone at all in my life – and I’ve been in the ministry since 1978 – who’s ever copied the entire Bible!”

But transcribing the entire Bible wasn’t the only thing that Caroline gave to her community. As an avid dancer, she would often go to nursing homes and perform for the people there, dancing to various music genres. Instead of shying away from the older people, Caroline was first to speak directly with each person she saw, intentionally getting eye to eye with them and ministering to them.

“It was just so uplifting to them,” Kenny said. “It’s always a ray of sunshine when people come in…and the activity directors all have her number, and always wanted to pencil her in, [saying] ‘Please come back!’”

Caroline’s personality is one of content. Whenever anyone asks how she is, she always responds with “perfect.” When they ask how the day is going, she says that it is “perfect.” Her trip to New York? “Perfect.”

“We certainly think Caroline is the closest thing to perfect there is,” Kenny said.

Caroline is one of many in the United States who was born with Down syndrome, and Kenny attributes much of Caroline’s growth to Jennifer’s mother, Norma. As a retired teacher, she spent hours at a time with Caroline. She often found the best ways to help Caroline learn new things. Kenny compares watching the two of them to “how Anne Sullivan was to Helen Keller.”

“It was a beautiful thing to watch, and it was a fun thing for them,” Kenny said.

Because of Norma’s influence in Caroline’s life, she was able to learn how to play piano, read, write and ride a bike, and as a result, she was able to handwrite her Bible into 43 binder notebooks. The Campbells believe Caroline’s accomplishment serves as reassuring hope that a disability doesn’t mean disaster.

“It’s an amazing life. Caroline is an amazing person to watch personally as her father. Watching her every day is an encouragement for me every day.” 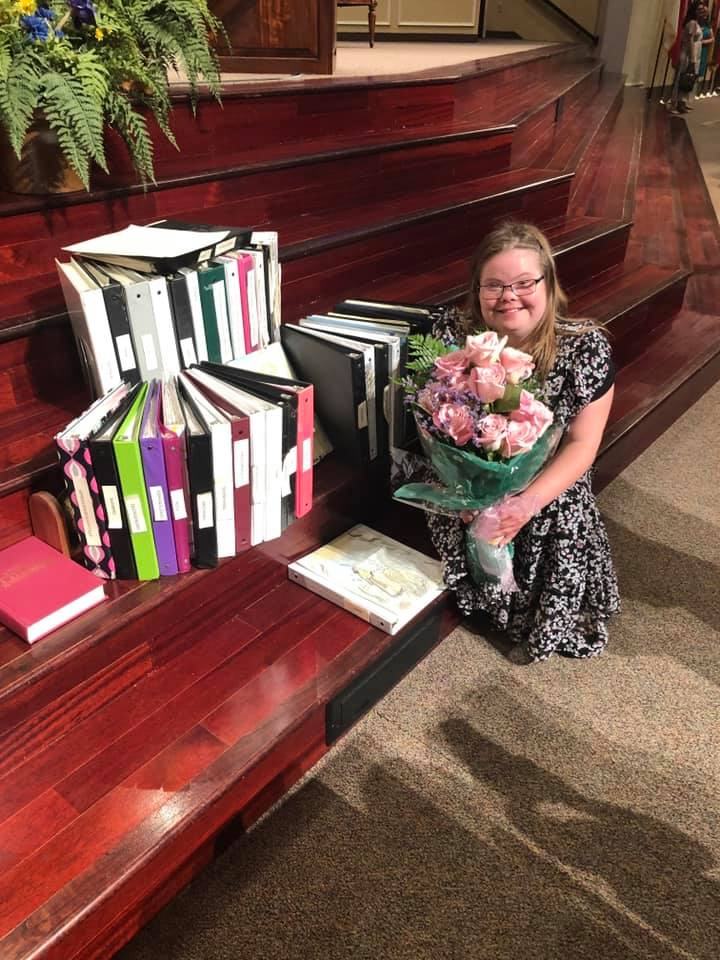 As for Caroline’s next steps, someone asked if she would write the entire Bible again, but this time in Spanish. Unfortunately, there was a slight problem.

“I don’t speak Spanish – at all,” Caroline said.

Instead, she is considering writing a book of her story. It would be an unedited account to maintain her voice. Though they’re still considering what they would name it, they have an idea.