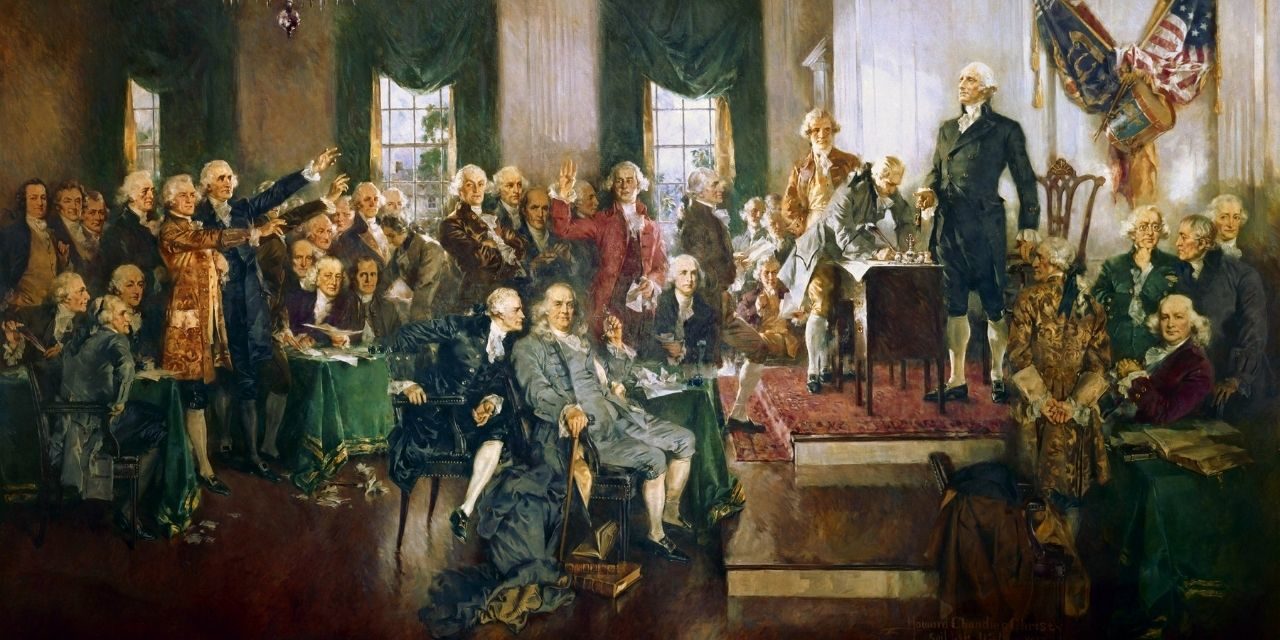 The U.S. Senate’s second impeachment trial of former President Donald Trump has raised several constitutional questions. Does the Senate have the authority try a former president? What types of speech and/or actions of Trump meet the constitutional threshold of impeachment for “treason, bribery, or other high crimes and misdemeanors?”

If there’s a robust debate by constitutional scholars over these issue – and there is – you can thank, or perhaps blame, the men meeting in Constitutional Hall in Philadelphia in the summer of 1787 who debated whether to include an impeachment clause at all, what offenses should justify it, and which government officials should be covered by it.

The convention notes provide a fascinating back-and-forth of the names we’ve all read about in our history books: James Madison, Gouverneur Morris, Elbridge Gerry, George Mason, Charles Pinckney, Edmund Randolph, and perhaps most importantly for the impeachment debate, Benjamin Franklin.

When the question of the impeachment of the president – participants in the room used the terms Magistrate or Executive – came up, there was a split as to whether the Constitution ought to provide for impeachment at all.

Gerry offered a motion that the president “be removable on impeachment and conviction for malpractice or neglect of duty.”

Pinckney and Morris moved to strike Gerry’s motion, with Pinckney suggesting that the president “ought not to be impeachable whilst in office.” Morris argued that allowing impeachment of the president by another branch of government would make him beholden to that branch.

Mason argued for the impeachment power. “Shall any man be above justice?” he asked the assembly.

It was at that point, with the debate going back and forth, that Ben Franklin entered the fray and with his typical logic and eloquence, asked and answered his own question:

What was the practice before in cases where the chief magistrate rendered himself obnoxious?

Why, recourse was had to assassination in which he was not only deprived of his life but of the opportunity of vindicating his character. It would be the best way therefore to provide in the Constitution for the regular punishment of the Executive where his misconduct should deserve it, and for his honorable acquittal when he should be unjustly accused.

Historians have pointed out that in the Roman and English models from which the Framers borrowed, the head of the government was not impeachable. Both the Roman Emperor and the British monarchy were not removable, with the result that some bloody assassinations and uprisings were necessary to deal with an executive who had “rendered himself obnoxious,” to use Franklin’s phrase.

Although men like Rufus King of Massachusetts argued that a periodic election of the president would render the need for impeachment unnecessary, even Gouverneur Morris eventually announced he had become convinced by the proponents of impeachment. The ten assembled states then voted 8-2 to include the impeachment of the president in the Constitution.

The Convention then went on to debate the possible grounds for impeachment, and although they agreed quickly on treason and bribery, the participants rejected such possibilities as “maladministration,” offered by Mason, and eventually settled on language proposed by Morris, “other high crimes and misdemeanors,” a phrase borrowed from English law.

Although we’re still debating the precise meaning of “high crimes and misdemeanors” over 200 years later, and whether a president can be impeached after leaving office, the Framers, thanks to the wisdom of Ben Franklin and others in the room at the Constitutional Convention, decided that our most drastic remedy for removal and disqualification of the highest officers in our civil government should be done peacefully and in accordance with the due process of law.

We may take the impeachment process for granted at this point in our history, but that decision in 1787 set us apart as a nation from other governments around the world and became the example that the world’s democracies have followed ever since.