Virginia Parents Sue School Board for Teaching Racism at School Nine parents are suing the Albemarle County School Board for discriminating against their children and indoctrinating them into a radical, racist ideology.

The Alliance Defending Freedom (ADF), the legal group representing the parents, said the school district’s policies and teaching are “rooted in critical race theory (CRT)” which “instructs that students must be treated differently based on their race.”

“CRT is an ideology that looks at everyone and everything though the lens of race. It classifies all individuals as privileged vs. unprivileged, oppressors vs. oppressed, victimizers vs. victims, haves vs. have nots, all based entirely on their race,” ADF explains in an online article, “One School Board Is Fighting Racism with … More Racism?”

ADF explains that CRT teaches that all people must become “anti-racist” – or they are discriminatory racists. And being anti-racist “requires that people be treated differently based on their race to advance “equity.”

Being “anti-racist” is not the same as being non-racist. Not at all.

As part of being “anti-racist, the suit says students are taught that the “privileged” or “dominant culture” consists of those who are white, upper-middle class, Christian, able-bodied, heterosexual, cisgender and male. (“Cisgender” is a made-up term referring to those who accept and embrace the male or female body and the masculinity or femininity they were born with, as opposed to those confused about their sexual identity.)

All students and teachers must fight against the “white dominant culture.” You got that, folx?

In a press release about the suit, ADF said, “In 2019, the school board enacted a policy that violates students’ civil rights by treating them differently based on race, and by compelling them to affirm and support ideas contrary to their deeply held moral, philosophical, and religious beliefs.”

The lawsuit explains that teachers and staff attended a mandatory training given by Glenn Singleton, founder of the Pacific Educational Group and author of Courageous Conversations About Race: A Field Guide for Achieving Equity in Schools and Beyond.

Singleton was paid $15,000 for a 45-minute talk – not a bad gig – plus royalties from his $36.95 book, which was used by all district teachers for monthly study and training.

The lawsuit says the talk and book “promote racial stereotypes and advocate differential treatment based on race.”

For example, staff were urged “to move from a ‘colorblind’ view of race to a ‘color conscious’ scheme” so they could implement “policies and programs that are anti-racist,” as seen in this slide from the training. 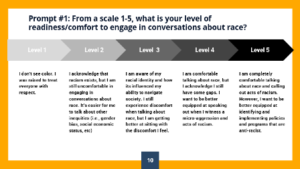 What Christians would call the correct position – not seeing race and not lumping people together in stereotyped groups – becomes the inferior position.

Another example from the lawsuit shows a slide that explains “Communication is a racialized tool” and shows the “different ways of communicating” between “White Talk” and “Color Commentary.” If the KKK put out such a slide, describing “White Talk” and “Color Commentary,” it would be labeled racist.

But CRT activists get a pass and call this “anti-racism.” They claim “White Talk” is verbal, impersonal, intellectual and task-oriented and that “Color Commentary,” which is non-verbal, personal, emotional and process-oriented, stereotyping both individuals and whole groups of people on the basis of skin color.

Parents allege that the policies and teaching implemented by the Albemarle County School Board discriminate on the basis of race; violate freedom of speech – compelling students to agree with and use CRT language; abridge their religious freedom, and usurp parental rights.

ADF Senior Counsel Kate Anderson stated, “Schools exist to educate, not indoctrinate children. Every parent has the right to protect their children against a school district that uses their authority to indoctrinate students in harmful ideologies.”

“Our clients believe that every person is made in the image of God, deserves respect, and therefore, should not be punished or rewarded for something over which they have no control. Public schools have no right to demean students because of their race, ethnicity, or religion (her emphasis),” Anderson added.

The lawsuit is C.I. v. Albemarle County School Board.