The Gallup polling group is reporting that just when Americans didn’t think consumer confidence in our nation’s elite media could go no lower, we find out it can. And it has.

Americans’ appraisal of the reliability and trustworthiness of mainstream media professionals who pride themselves in being the citizenry’s truth-tellers continues to tank … and tank badly. This includes both legacy newspapers and television news.

It’s so bad even the scribes over at The Washington Post had to admit these new numbers are extremely revealing and painfully so. The Post wryly admitted, “At this point, there are probably exotic diseases that poll higher than we do, though we can take (extremely) modest comfort that Congress is even less highly regarded.” At least they are getting the message.

So what does this new data say?

The trendline looks like this, and it simply continues a slow, steady decades-long decline. But as you can clearly see, confidence in both newspapers and television news reporting have been taking a stark decline in the most recent years. No business model can sustain itself with such a downward trajectory.

In fact, Gallup reports their data shows “no improvement” in any measures in public confidence ratings. Gallup also explains, “Television news and newspapers rank nearly at the bottom of that list of institutions, with only Congress garnering less confidence from the public than TV news.” Ouch indeed.

Regarding newspapers specifically, Gallup adds, “The percentage of Americans who say they have ‘very little’ or volunteer that they have no confidence is currently the highest on record, at 46%.” (emphasis added) And for television news, Gallup explains this is the fourth consecutive year that confidence in TV news is below 20 percent. 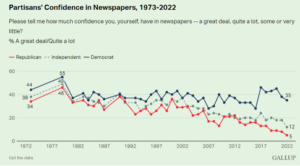 The trendline seems to be essentially the same for television news, save for a small uptick for Republicans in the last year or so. Could this be the Fox News phenomenon? Gallup does not raise this question.

If so, it is only a blip. Future polling will be needed to determine if this uptick among Republicans turns into a trend.

But the major take-away from this new report is that across the board, American citizens continue to lose confidence in mainstream forms of news reporting. Gallup concludes their report with this sober note,

Although trust in the media in the U.S. has been scarce for many years, confidence ratings for newspapers and TV news have never been as low as they are now. Taken together, these data suggest that the media has a long way to go to win back the public’s confidence.

At least the American people are paying attention to what they are being fed.

The Daily Citizen: Revealing the Liberal Bias of the American Media

The Daily Citizen: American’s Trust in the Mainstream Media Continues to Fall