March for Life: A Retrospective 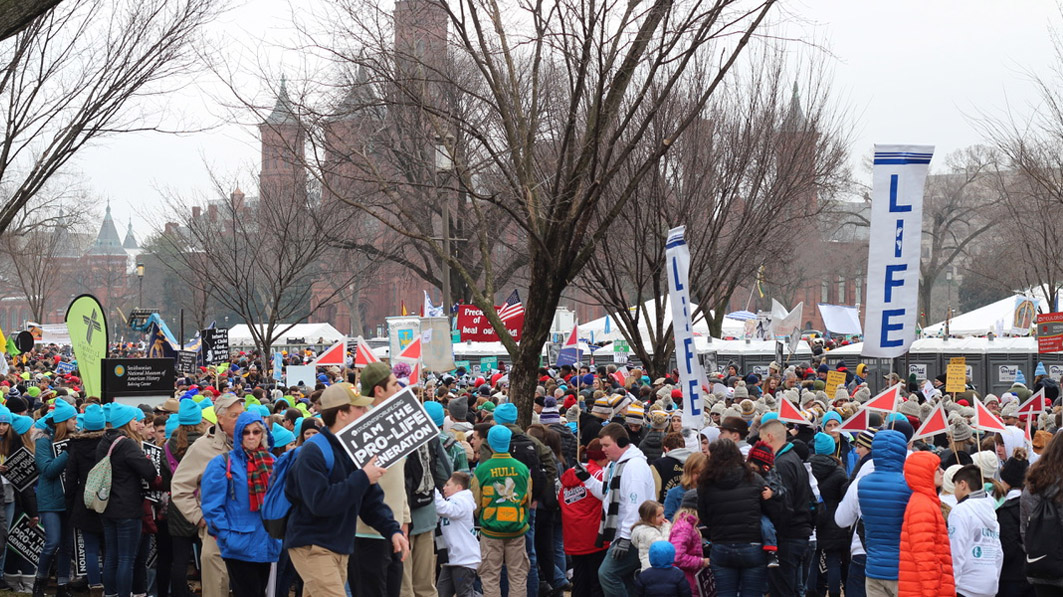 With only two exceptions, I have not missed a March for Life in 30 years. This year’s, the 46th, was the best one ever.

We marchers have endured sub-zero temperatures, sleet, ice, ice-snow, snow, freezing rain, and gale-force winds.  This year it was almost balmy – in the low 40s with light winds. Mucky from our recent midwinter snows a week before, there was a dampness and a chill in the air which I found mostly refreshing; but all together, the near-perfect marching weather graced our resolve.

What made the march ideal, though, had comparatively little to do with Mother Nature. It is that the marchers among us keep getting younger and larger unlike the pro-abortion activists.

Demographically, I would guess that the median age of marchers is around 19 to 20 years old, maybe a wee bit younger. Good marching weather brings out a fairer example of the three generations most likely to be present in Washington for the late-January gathering.

Bus upon bus upon bus arrived near the National Mall a few hours before the march began, disgorging their sleepy high-schoolers from all over the Northeast, mid-Atlantic, South, and Midwest. I was dazzled by the steady, unending stream of freshmen through seniors who provided energy to the most important annual march for justice in 21st century America.

Their youthful vitality inspires the rest of us stalwarts. There was even a melodic Knights of Columbus marching band this year.

The high school buses were matched only by the large number of college and university buses and vans pouring into the Beltway.

On 15th street, a few blocks from the marching step-off point, I was dazzled by the sheer number and matrix of students who are members of their campus life clubs — many of whom traveled all night to get to Washington in time for the Noon rally on the National Mall ahead of the 1pm march start-time. Yale, Harvard, Seton Hall, St. John’s, Princeton, Amherst, the University of Michigan, Notre Dame, William and Mary, the University of Virginia, and Penn State were just a few of the sweatshirts and jackets I observed.

What struck me most of all is the sheer goodwill and almost tangible esprit de corps among the marchers. There were no deafening street corner shouters or heart-stopping electric music ear-splitters; no pushing and shoving among 125,000+ people on and around the Mall; no trash or garbage lying in the streets or on the sidewalks.

There was ample goodwill and camaraderie of purpose and goals.

I attended the Focus on the Family ‘grab a coffee/hot chocolate/donut and go’ breakfast at a downtown Washington DC hotel. Hundreds poured in, replete with baby strollers, crutches for disabled family members, and motorized scooters for older family members. It was as if we had all known one another a hundred years: cheerfulness all around, and even a shaking of hands and giving of hugs to those we had never met before.

I met people from Pennsylvania, Ohio, Michigan, South Dakota, North Dakota, Georgia, the Carolinas, New Jersey, and from all over New England. There was a palpable joy of mission. For many, this was their first march.

The highlight of this year’s march for me was meeting a family that had brought their Down Syndrome daughter/sister to their fourth march in a row. I asked why. “So that everyone else can appreciate that life is life is life” the girl’s mom told me.

That’s why we shall march and march until Roe’s overturn is the answer to a Jeopardy question one day — like the odious and infamous Dred Scott Supreme Court decision of another century.

In America, a better tomorrow is always just ahead — by God’s limitless grace.