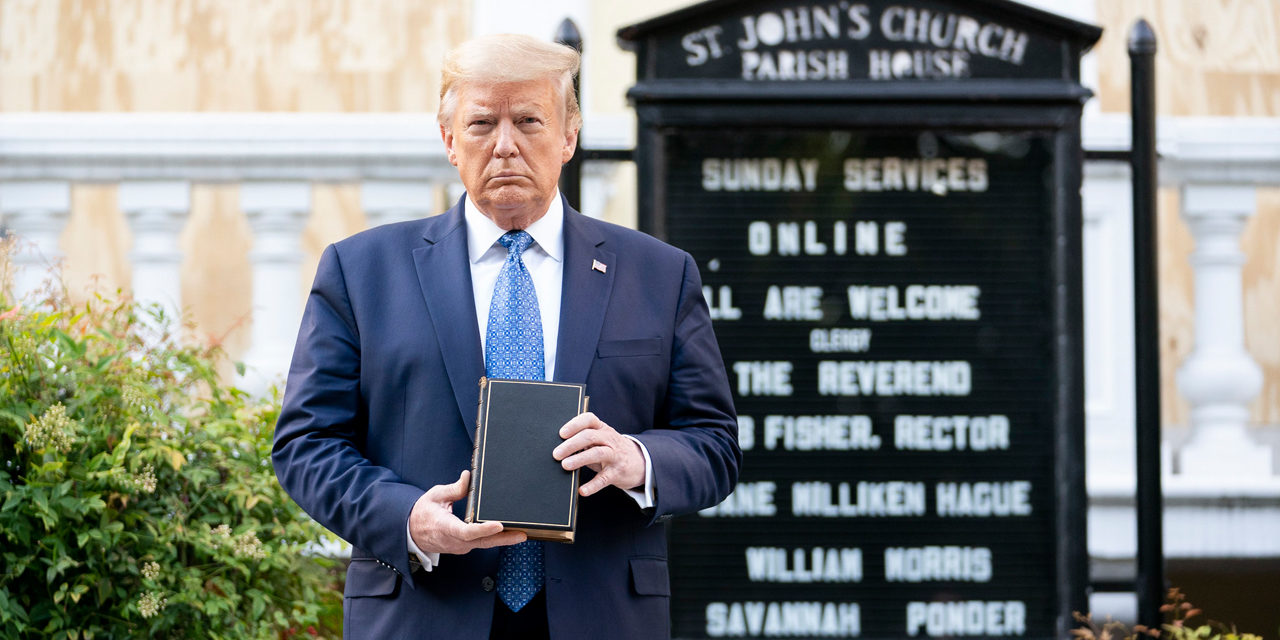 Yesterday, President Donald Trump held a brief press conference from the Rose Garden at the White House. He stated that he was a “law and order” president, and that the riots that America has been gripped with over the past week would be ended “now.”

If state governors failed to act and were unable to quell the protests, the president announced that he would use his authority as commander-in-chief by sending in the United States military to end the violent riots.

Concluding his remarks, the president surprised reporters and the nation as he said, “Thank you very much, and now I am going to pay my respects to a very, very special place.”

The nation then watched as the president walked out of the White House, through Lafayette Square and to St. John’s Episcopal Church, where he held up a Bible and stood for pictures, paying his respects to the importance of the historic church which was nearly lost on Sunday night.

The president walked to St. John’s because around 10PM on Sunday night, rioters broke into the church and set the basement nursery ablaze. The church was built by famous architect Benjamin Latrobe in 1816, and every sitting president since James Madison has attended the church at least once while in office. The District of Columbia fire department was able to save nearly all of the church.

The Episcopal Bishop of the Diocese of Washington, Bishop Mariann Edgar Budde, expressed her anger that the president used St. John’s for a photo op in an interview with George Stephanopoulos.

“The president… stood in front of St. John’s and held up a Bible as if it were spiritual validation and justification for a message that is antithetical to the teachings of Jesus and the god of justice,” Budde said. “He is not entitled to use the spiritual symbolism of our sacred spaces and our sacred texts to promote and justify an entirely different message.”

Speaker of the House Nancy Pelosi, D-Calif., reacted on Tuesday morning by seeming to give a short devotional from the book of Ecclesiastes on the topic of time. “Last night when I saw the President hold up the Bible, I was thinking of so many things in the Bible that would’ve been appropriate in terms of humanity… and I’ve been thinking about time,” Speaker Pelosi said prior to speaking about time for five more minutes.

Senator Ben Sasse, R-Neb., said of the controversy, “There is no right to riot… But there is a fundamental — a Constitutional — right to protest, and I’m against clearing out a peaceful protest for a photo op that treats the Word of God as a political prop.”

Pastor Robert Jeffress appeared on Fox & Friends First on Tuesday morning to support the president’s move. “I believe President Trump was absolutely correct in walking over there last evening and standing in front of that church to show his solidarity, not only with that congregation, but with houses of worship all across America, demonstrating his intent to protect churches from those who would try to destroy them,” Pastor Jeffress said.

Some have insinuated that outrage at the president’s actions was justified because the District of Columbia police used smoke and pepper balls to disperse protesters in order to create space for the walk.