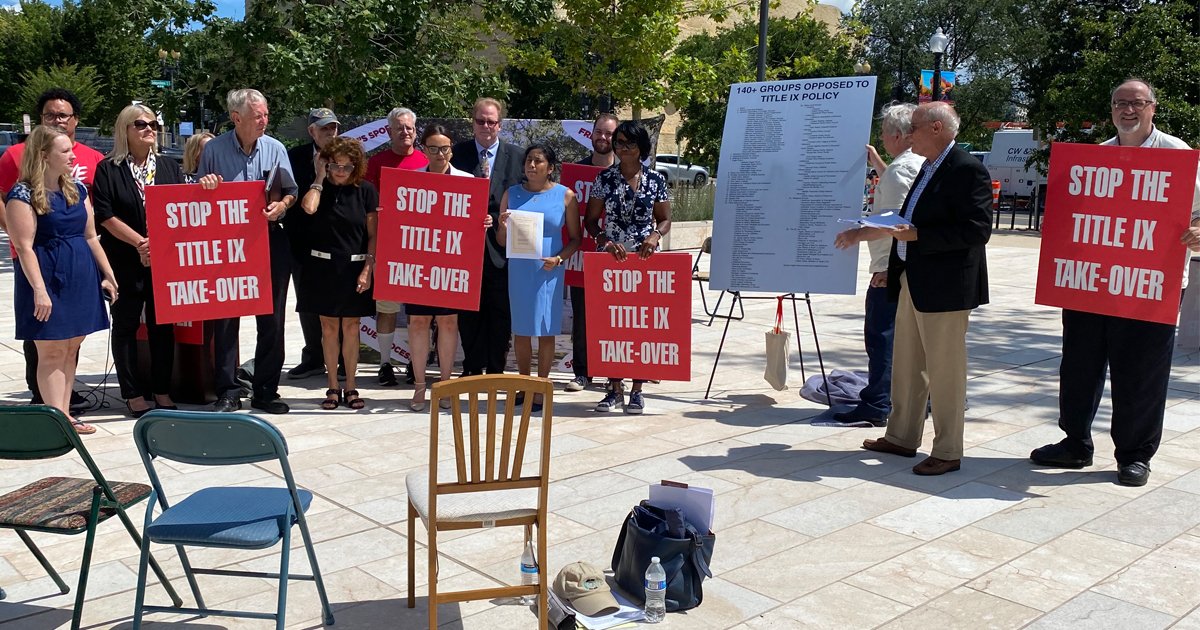 A coalition of protesters rallied in Washington, D.C., to oppose the Department of Education’s (DOE) proposed new regulation that will redefine “sex” in Title IX to include “sexual orientation” and “gender identity.” Title IX prohibits sex discrimination in federally funded education programs.

The redefinition goes even further, adding “pregnancy or related conditions” to the definition of sex. This is leftist, bureaucratic code for codifying so-called “abortion rights” into the education system.

The rally, “Stop the Title IX Take-Over,” was held August 12. Speakers included Ryan Bomberger, from The Radiance Foundation; Linda Chavez, with the Center for Equal Opportunity; and the American Principles Project’s Jon Schweppe.

Bomberger told a news outlet, “When we can’t even talk basic truths, and then you can be harassed by school administrations because you’re speaking biological truths, that’s a problem.”

The organization Stop Abusive and Violent Environments (SAVE) has brought together a network of more than 140 different school associations, state and local policy organizations, legal aid groups, religious organizations and Title IX law firms to oppose the redefinition by the DOE.

SAVE has also provided a simple way for anyone to send a comment to the DOE opposing this 700-page proposed rule.

Sarah Perry is Senior Legal Fellow at the Heritage Foundation. At the rally, she said the DOE is “expanding ‘sex’ to include ‘gender identity,’ and in so doing is gutting protections for women and girls.”

This is an important issue: Rewriting Title IX would mean the denial of the reality that there are two sexes – male and female.

Women will get the short end of the stick if the DOE goes forward with its plan, threatening their privacy and safety in sex-segregated places in schools. Opportunities for victories, team camaraderie and scholarships will be taken from them – and given to males who believe they are female.

Parental rights will be lost, as young children are exposed to lessons that include sexual orientation, gender identity, and age-inappropriate discussions of sexuality. Worse, children will be “transitioned” without their parents’ knowledge or consent.

The issue also has implications for religious freedom. “Bureaucrats are threatening to defund schools and religious schools, and take away the financial aid of religious Americans,” said Maya Noronha, special counsel for First Liberty.

Here’s another reason why this is so important: Adding “pregnancy or pregnancy-related” conditions to the Title IX non-discrimination law means adding abortion and contraceptives to education regulations.

Should the HHS proposal pass, such language will be used to force schools to teach children about abortion. Schools will use the rule to justify providing contraceptives to schoolchildren – without parental knowledge and consent.

But you can do something about this.

The DOE is hearing comments on this new Title IX policy until September 12, 2022.

SAVE has provided step-by-step instructions for “How to Submit Your Comment to the Department Of Education.”

Concerned citizens can learn about how to send their own letter to the DOE during the comment period, or they can visit the Defense of Freedom Institute page. There, they can send a short, customizable message about how this DOE regulation would affect free speech, due process, women’s sports, or parent’s rights.

Defense of Freedom Institute page for submitting comments to the DOE.

SAVE’s “How to Submit Your Comment to the Department Of Education.”